Five members of a drugs gang have been sentenced after they were responsible for flooding the streets of Stoke-on-Trent with heroin and cocaine.

A drugs gang were convicted for flooding Stoke-on-Trent with heroin and cocaine. Police have now warned drug dealers that they will be caught.

The six gang members were behind a huge drugs operation and were caught following a two-year investigation.

Five have been jailed while the sixth member awaits sentencing.

On eight occasions, officers carried out surveillance before raiding an address in Burslem where £54,000 worth of class A drugs were seized.

Around 100 messages each day were sent, offering drugs for sale and the prices.

Stoke-on-Trent Crown Court heard police involvement began on September 6, 2017, when a Vauxhall Astra was stopped in Newcastle. The driver, Manraj Thandi, was arrested for possessing class A drugs.

Thandi’s phone detailed a meeting between him and Paulina Kurstak at a Travelodge in Newcastle. After discovering further drugs, she was arrested.

The drugs line was then discovered after police analysed Kurstak and Thandi’s phones.

Police were led to a rented property in Dartmouth Street where Yassin Khan prepared the drugs for sale before Kurstak and Israr Tariq delivered them to buyers across North Staffordshire.

On January 25, 2018, the address was raided and the other members of the drugs gang were arrested. Kamran Khan and Daud Khan were identified as the leaders of the operation.

Paul Spratt, prosecuting, explained: “In the period from August 2017 to January 2018 a significant organised conspiracy to supply Class A drugs operated from Dartmouth Street, Burslem.

“Kamran Khan organised others in a conspiracy to supply significant quantities of cocaine and heroin across the city, Newcastle and Crewe. Police found £54,000 worth of drugs at the address.

“Kamran Khan was the leader of the operation. He rented the property.”

Thandi pleaded guilty to being concerned in the supply of heroin and cocaine. Tariq admitted the same charge. 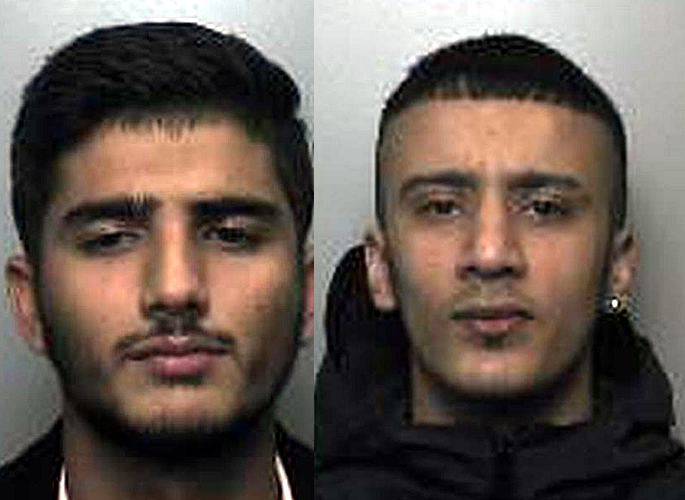 “This was a well-organised conspiracy moving significant quantities of heroin and cocaine across North Staffordshire and South Cheshire.

“We hope these convictions send out the message we will not tolerate drug dealing in Staffordshire.”

Kamran Khan, aged 23, of Burslem, received a further two years on top of a seven-year jail term he was already serving for drug dealing.

In mitigation, Justin Hugheston-Roberts said that Khan’s life had been “completely taken over by drugs” in the last few years.

He said: “He is a young man who has worked intermittently. The remuneration he got from selling drugs was better than in the family business.”

Mr Hugheston-Roberts said that Khan was attacked as he owes money to people higher up in the chain.

He added: “He was attacked in the street. He had no idea who they were but he knew who had sent them. He has been attacked while in prison.

“If you owe £50,000 to people higher up in the chain than you are and are due to face them knowing their drugs have been taken by the police, life is not very comfortable for him.”

Daud Khan, aged 21, of Burslem, was jailed for three years. His lawyer Balbir Singh said that his client was not the leader of the operation.

“He was doing something under direction. It is two years since the offending. He has matured a great deal since these matters.”

Paulina Kurstak, aged 22, of Norton, was jailed for two years and nine months. David Jackson stated that his client accepted her role was to split the drugs into deals. He said:

“She was engaged and continued to be engaged through a degree of pressure and coercion. There were occasions when she sought to extricate herself from the conspiracy.

“She did not appreciate the full extent of the operation.”

“The principle conspiracy involved the distribution of class A drugs – heroin, crack cocaine and cocaine – in this city.”

“There are serious and pernicious problems caused by the supply of class A substances.

“These courts day after day, week after week, year after year, see the net result of these drugs on society and those less fortunate who inhabit society.”

Stoke Sentinel reported that a Proceeds of Crime hearing will take place in 2020.

Dhiren is a journalism graduate with a passion for gaming, watching films and sports. He also enjoys cooking from time to time. His motto is to “Live life one day at a time.”
Asians on New Year Honours List 2020
Indian Wife kills Son due to Affair with Brother-in-Law