Doctors bring Footballer Friend back to life on Pitch

Two doctors from Leicestershire effectively brought their footballer friend back to life on the side of the pitch. The three men spoke about the incident.

"there was no pulse. It was really shocking at the time."

Two Leicestershire doctors brought their friend back to life after he suffered a heart attack while playing football with them.

Forty-five-year-old Dilraj Sagoo, of Anstey, had been playing a seven-a-side game alongside the two doctors at St Margaret’s Pastures in Abbey Park on September 25, 2019, when he felt a tightness in his chest.

Dilraj had told them that his chest was feeling tight and his left arm was in pain.

He explained: “The lads said to me, ‘Go and sit down behind that goal and don’t move’.”

Dilraj went on to say: “It felt like the symptoms of a heart attack but I wasn’t worried – if it was a heart attack it would hurt a lot more, I thought.

“I sat down and the pain dissipated but then I went to pick up a football that was kicked from another pitch and felt worse again.

“I told my friend in goal I was going home and started to walk back to my car and had a sudden dizzy spell.”

Dilraj explained that he does not remember what followed until he woke up.

When he woke, he told the doctors that he wanted to go home but was told that an ambulance was on its way.

After Dilraj collapsed, GPs Dr Ismail Daya and Dr Nadeem Ackbarally rushed off the pitch to his aid.

“I heard someone else screaming and looked over and Dilraj was flat on his face. I ran to him and there was no pulse. It was really shocking at the time.

“He was dead. He was on the ground not breathing and there were about 40 people including kids watching. It’s awful to think how it would have been if he hadn’t made it.” 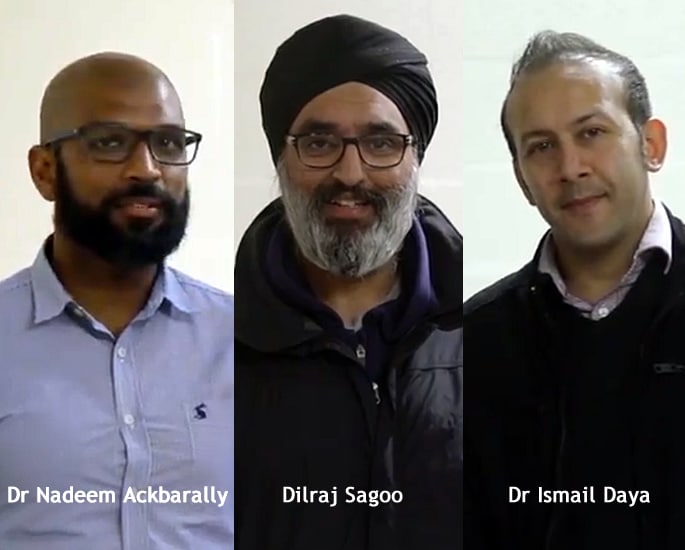 Nadeem helped his fellow doctor and the pair started chest compressions. They also shouted for someone to find out if there was a defibrillator nearby.

There had been one but there was still only an outside chance that Dilraj would be brought back to life without the equipment and drugs inside a hospital.

Nadeem explained: “Chest compressions alone very rarely start a heart going again and even if you have a defibrillator you need some electrical activity in the heart for it to work so it’s not guaranteed to bring someone back to life.

“Luckily Dilraj could be saved because he had a shockable rhythm.”

Nadeem said that he had performed CPR in the past but he admitted that he had never done it on a friend before.

He went on to say:

“I’ve known Dilraj for six years and I knew he was married and had a young boy so it was horrible.”

“I remember thinking, ‘You can’t die. It’s not an option’.

“It was very surreal. After he was shocked we kept doing compressions and he started groaning after about 10 seconds or so.

“He had no idea what had gone on. But everything had just worked out perfectly.

“It was an amazing bit of luck, or fate, or whatever, that two doctors and a defibrillator were right there. If it had happened at home it would have been very different.”

Dilraj had a stent (small tube) inserted in the artery that had caused the heart attack to prevent it from happening again.

He spent three nights at Glenfield Hospital before he returned home to his family. Leicester Mercury reported that he is currently taking a month off from his IT job to recover.

Diljraj is grateful that his friends were there to save his life.

“If it wasn’t for Nadeem and Ismail I wouldn’t be here.

“I’m also very fortunate there was a defibrillator and I want to advocate for more to be dotted around the county because they are critical.

“A lot of things came together to save my life.”