Deepika reacts to Viral Meme about Her and Ranveer Singh

Actress Deepika Padukone has reacted to a funny, viral meme about herself and her husband, Ranveer Singh. Find out what she had to say.

Bollywood actress Deepika Padukone has responded to a viral meme about herself and her husband and fellow actor Ranveer Singh.

The couple shared a picture of themselves on their respective Instagram accounts to commemorate Diwali.

In the picture, the happy couple is seen laughing. Deepika is wearing a red outfit while Ranveer is wearing an orange kurta.

Sharing the picture, Ranveer captioned it:

Their picture was quickly turned into a meme. A fan editing the picture and compared the couple to popular Indian desserts, motichoor laddoo and gajar ka halwa.

The meme showed a collage of the two desserts with the caption: “Motichoor ladoo and Gajar ka Halwa in pictures.”

The second image was of the couple with the caption: “Motichoor ladoo and Gajar ka Halwa in real life.”

Reacting to the meme, Deepika Padukone shared it on her Instagram stories. She wrote: 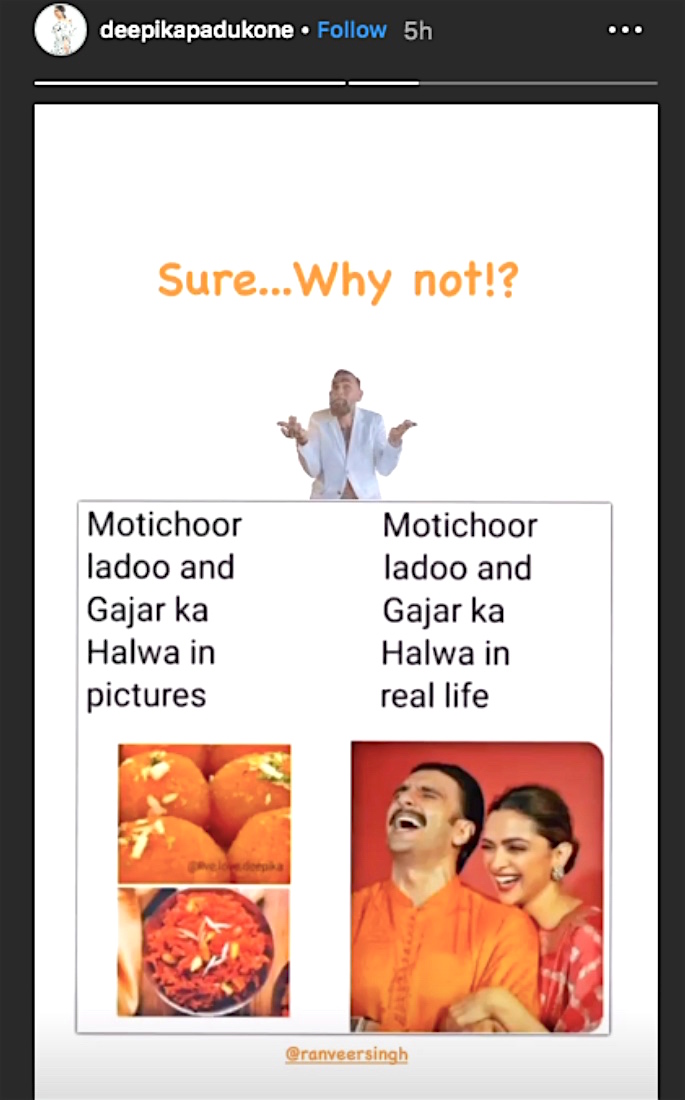 Ranveer Singh took to Instagram to post a loved-up picture of himself with his wife. He wrote:

On the work front, Ranveer Singh and Deepika Padukone will be seen starring opposite each other in Kabir Khan’s 83 (2020).

Ranveer will be seen as former cricketer Kapil Dev while Deepika will portray his onscreen wife, Romi.

Ranveer even made a cameo appearance in Deepika’s film, Finding Fanny (2014).

Speaking to PTI about working with Ranveer for 83, Deepika explained that it was a refreshing experience.

“It was nice to work with Ranveer in a slightly more realistic setting. Not having to mouth such intense dialogue with that kind of language like we did in three films.

“It was refreshing. In fact, we had to remind ourselves that ‘this is the same actor I’ve worked with.’

“We both looked at each other and said, ‘wow, we should do stuff like this more often together’.”

Ayesha is an English graduate with an aesthetic eye. Her fascination lies in sports, fashion and beauty. Also, she does not shy away from controversial subjects. Her motto is: “no two days are the same, that is what makes life worth living.”
Taimur Ali Khan shouts at Paparazzi ‘No Photo’
Milind Soman says People must act ‘Smarter than Monkeys’