Ranveer Singh and Deepika Padukone have formally announced their wedding date after much speculation, and fans and well-wishers are super excited.

It’s official! Ranveer Singh and Deepika Padukone have confirmed their wedding date which will be taking place in November 2018.

With so much speculation around this much-loved Bollywood couple, known as DeepVeer to their millions of followers and fans globally, the couple took to their social media accounts to announce and confirm this wonderful and big news.

A formal card with the announcement was posted on their social media accounts.

The English announcement card, headlined by the date 21.10.18 says:

“With the blessing of our families, it gives us immense joy in sharing that our wedding it to take place on the 14th and 15th of November, 2018.”

“We thank you all for the love you have showered upon us over the years and seek your blessing as we embark on this incredible journey of love, loyalty, friendship and togetherness.”

“Lots of Love Deepika and Ranveer” 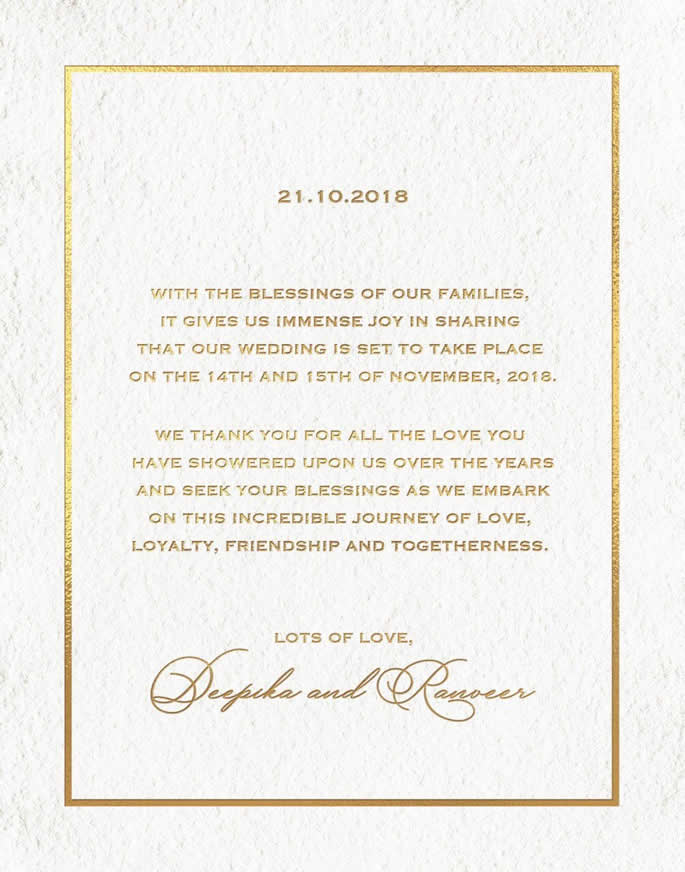 Until now, Deepika and Ranveer have steered clear of answering any questions about their prospective wedding.

“You are seeing this every day, including details about the colour of my sherwani and wedding gifts. But, when there is something, you will be the first to know.”

Deepika also dismissed rumours of it being November by saying:

“There have been many November weddings.”

With it now being formalised, no doubt there will be emerging gossip and a huge media focus on what the wedding will be like. 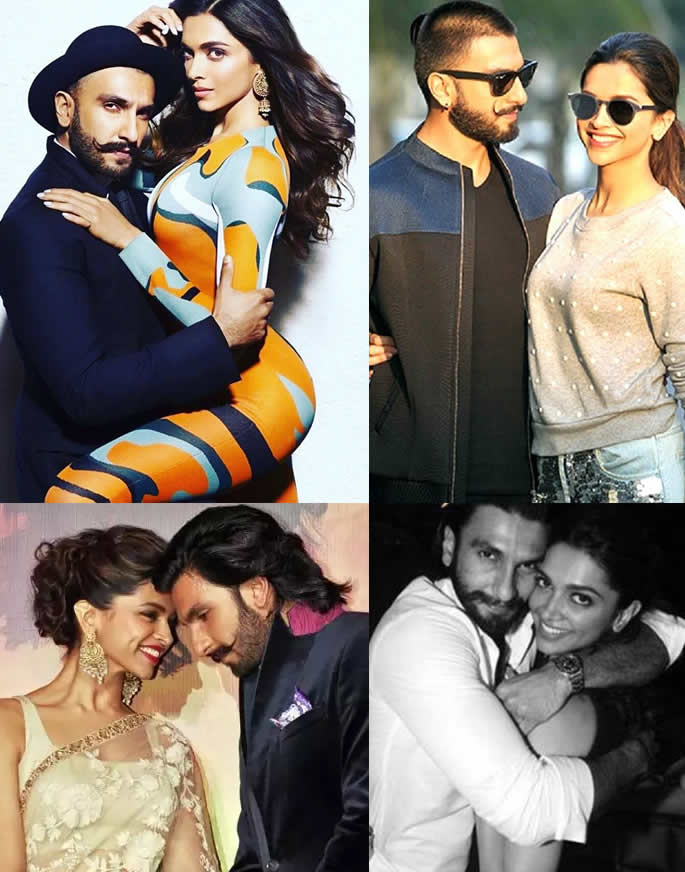 To date, there have been many reports as to what to expect from the wedding.

One report said no mobile phones will be allowed at their wedding venue to stop photos and videos being posted of the grand event.

Regarding the wedding venue, it’s speculated the destination will be at an Italian-affair with the Lake Como in Italy being selected for its location and beauty.

Wedding outfits are always a major interest point and with Deepika being a major fan of Indian designer Sabyasachi, it’s likely she will be opting for one of his designs for her wedding.

In terms of jewellery, it’s been reported by Bollywood Life that they will be selecting silver jewellery for their big day, instead of the choice of traditional gold or even the new trend of platinum jewellery.

As for the guests, no doubt there will be a major attendance by ‘A’ list Bollywood stars including SRK, Sanjay Leela Bhansali, Aamir Khan, Karan Johar, Amitabh Bachchan and others. However, otherwise, it is deemed to be a very private wedding.

After the announcement, it’s also being reported that as with any big fat Desi wedding, shopping has already started for the lavish affair at both the Padukone and Singh houses.

Reaction to the announcement has come from fans and Bollywood celebrities on social media.

Yasssss! Bestest news!! You & @deepikapadukone make the most wonderful, gorgeous couple!! Wish you guys all the happiness in the world as you begin this new journey together!! @RanveerOfficial ??????? https://t.co/zuxACnDl8m

Super happy for you guys ?? your wedding is gotta be royal coz you are marrying a Queen! ??? #DeepVeer forevaaa ?? https://t.co/KQVM7kYIkI

GROUP HUG #DEEPVEER fans???? We have been through it all .. a lot of negativity from some of their fans and other fandoms doubting and mocking ….from rooting for Ranveer and Deepika since Ram Leela days to now when they will be man and wife soon ?? #deepveerkishaadi

They are getting married on the date Ramleela got released i.e 15th Nov??? #deepveer #DeepveerKiShaadi

The couple began dating after they worked together in Goliyon Ki Raasleela Ram-Leela in 2013, directed by Sanjay Leela Bhansali. Prior to this Deepika was dating Ranbir Kapoor. Although, none of the stars confirmed their relationship status.

They also appeared together in Sanjay Leela Bhansali’s films Bajirao Mastani (2015) and Padmaavat (2018), which were both huge films for them.

In between, the Bollywood couple has created established careers individually. Deepika has even made head roads in Hollywood appearing in the Xander Cage movie with Vin Diesel. Ranveer has also had hits like Befikre (2016), Gunday (2014) and Band Baja Barrat (2010).

Now with the wedding announced, all eyes will be on this popular B-town couple and further news related to their big day.

DESIblitz wishes the wonderful couple all the best!

Nazhat is an ambitious 'Desi' woman with interests in news and lifestyle. As a writer with a determined journalistic flair, she firmly believes in the motto "an investment in knowledge pays the best interest," by Benjamin Franklin.
Elnaaz Norouzi shares Details of Sexual Harassment by Vipul Shah
Saif Ali Khan reveals son Ibrahim aspires to be Bollywood Star