"Your greed knew no bounds."

An Oldham-based ‘chop shop’ gang who shipped stolen luxury cars worth £3 million to Dubai have been jailed for a total of almost 50 years.

High-end luxury Range Rovers, Mercedes and Porches were stolen to order before being sent to the Middle East or stripped for parts.

More than 95 cars worth at least £3 million were stolen across Greater Manchester and from as far away as London.

The gang, who called themselves ‘The Company’, are believed to have links to organised crime in the Middle East.

The gang operated ‘chop shops’ at old mills in Bury and Oldham, as well as a unit in Wigan, where stolen cars were stripped down.

One man at home in Failsworth with his three-year-old daughter was told he would be killed if he went outside to investigate, as thieves stole his Mercedes.

Another man had his car robbed in broad daylight, while another was at home with his family when masked men broke into his home.

The gang members discussed their crimes on a WhatsApp group named ‘The Company’.

They targeted high-value cars. Once stolen, the cars were either stripped for parts or exported to the Middle East.

Cars were stolen with the help of high-tech gadgets, allowing keyless entry.

During a 12-month period, a total of 11 shipping containers were shipped. Three were recovered and all contained Range Rovers and stolen parts.

One shipping container containing stolen Range Rovers and parts, destined for Dubai, was stopped at Seaforth Dock in Merseyside before it could leave.

Another was recovered in Istanbul, while another container sent to Sharjah in the United Arab Emirates was returned unopened.

The first chop shop was uncovered after a hire car company became suspicious.

An Audi had been loaned out, but the Oldham dealership was told the car could not be returned in time as it was in London.

Suspicions arose and the dealership used the car’s GPS system and discovered was actually in Chadderton, outside Stockfield Mill in Chadderton.

Police attended the unit and found stolen cars and parts.

Undeterred, the gang then moved to a unit behind a Kwik Fit garage in Wigan.

Officers then discovered another ‘chop shop’ at Vale Mill in Chadderton, a former textiles mill.

It was uncovered after a man was robbed of his Audi in Oldham. The car’s tracking software led police to the mill.

The gang then took on a unit at Pioneer Mill in Radcliffe, where further parts of stolen vehicles were found. 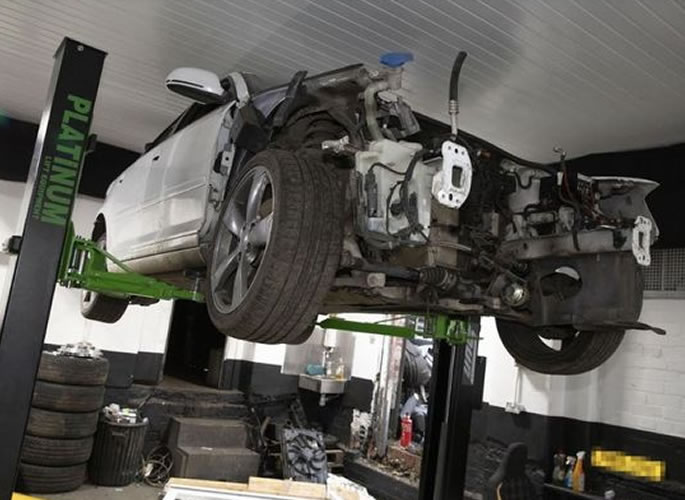 Ringleader Asif Hussain and other gang members were prosecuted, but the robbers have not been caught.

Judge Anthony Cross QC said senior members of the gang knew how the cars came into their possession.

He said: “This was a professional operation led by career criminals who were motivated by profit and greed, and who cared for not one moment how the expensive vehicles came into their possession.”

“You knew where the vehicles were coming from and how, yet you took them.

“Not content with selling them to the domestic market you formed a new conspiracy and shipped them abroad.”

Saijid Jangharia was “at the heart” of the gang and was “directly implicated” in the theft of at least 27 vehicles.

Hadir ALi was a “co-founder” of the gang and the named tenant at two ‘chop shops’.

Judge Cross said he will ask GMP Chief Constable Stephen Watson to investigate after some gang members were allowed to commit crime “with impunity” after being released under investigation.

He continued: “On a number of occasions defendants in this case, with bad records were released under investigation.

“It appears yet again police officers failed to make appropriate and obvious enquiries about the men they had arrested.

“Had those checks been made and detained in custody then perhaps some of their victims would have been spared the terrible trauma that befell them.

“That some of these experienced criminals were allowed to commit crime it seems, with impunity, is of some considerable concern.”

Asif Hussain, aged 44, of Oldham, pleaded guilty to conspiracy to handle stolen goods, conspiracy to export and fraud. He was jailed for 15 years.

Hadir Ali, aged 27, of Oldham, pleaded guilty to conspiracy to handle stolen goods and conspiracy to export. He was jailed for 11 years.

Saijid Jangharia, aged 37, of Bolton, pleaded guilty to conspiracy to steal and conspiracy to export. He was jailed for 10 years.

Ibraaz Shafique, aged 23, of Oldham, pleaded guilty to conspiracy to handle stolen goods, conspiracy to export and fraud. He was jailed for five years.

Tayub Hasnain, aged 37, of no fixed address, pleaded guilty to conspiracy to steal and conspiracy to handle stolen goods. He was jailed for five years and six months.

Dhiren is a journalism graduate with a passion for gaming, watching films and sports. He also enjoys cooking from time to time. His motto is to “Live life one day at a time.”
Scammer used Grindr to Rob & Blackmail Men after Sex
‘Asian K’ Drug Dealers caught with £300k Cocaine