One of UK’s Largest ‘Chop Shop’ Gangs busted by Police

A Birmingham-based ‘chop shop’ gang, believed to be one of the biggest in the UK, was brought down by the police following an investigation.

"This group was handling stolen cars on a huge scale"

A gang who ran one of the UK’s biggest car ‘chop shop’ rackets have been jailed.

The Birmingham-based group were convicted and jailed after police connected them to over 100 stolen vehicles valued at more than £1 million.

The cars were stolen during burglaries and violent carjackings. They were dismantled at chop shops in Birmingham before being sold to unsuspecting customers online.

They were on the roads without any safety or mechanical checks. A VW Golf, which was sold to a man for just over £10,000, had been re-fitted with airbags from a stolen car.

A specialist vehicle examiner from West Midlands Police (WMP) stated that they would have failed to deploy in the event of a crash.

The group were linked to 117 stolen cars from the West Midlands, Liverpool, Milton Keynes, Buckinghamshire, Warwickshire and Yorkshire.

But it is believed that they also took parts from hundreds more stolen cars.

The gang were busted after a stolen £70,000 Mercedes was traced to a garage on Charles Henry Street, Digbeth.

The car was found on false plates and surrounded by car parts, body panels and number plates from 21 stolen cars. 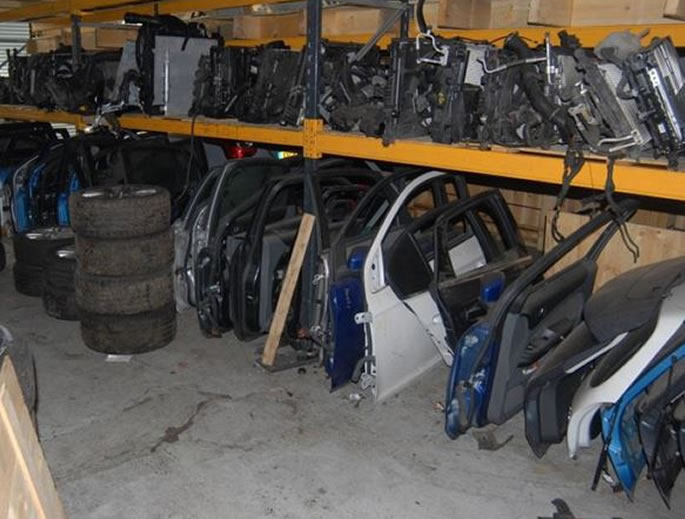 Another chop shop was discovered in Cheapside where 24 stolen cars had been dismantled. More car parts and documents were seized from the homes of Nadeem and Arshad.

The men had been selling stolen car parts through two eBay accounts.

Another chop shop was found in Sparkhill after a BMW stolen from a garage forecourt in Derby was tracked to a business unit.

Police confronted Hussain and asked: “There’s a gentleman here claiming one of his cars is in your garage and is stolen. It’s an M3. Is there an M3 here?”

Hussain replied: “There is but it’s not stolen, bro.”

Zameer tried to escape by pushing an officer against a wall but was arrested when he was trapped down the side of his stolen van. Hussain and Nadeem were also arrested. 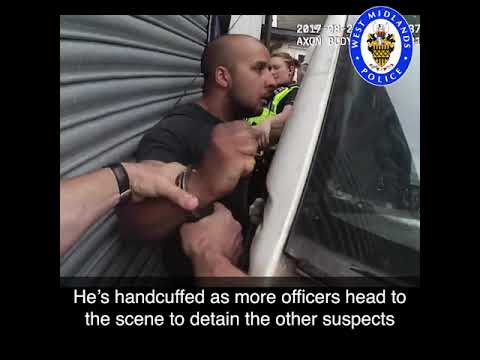 On March 28, 2018, officers searched 250 shipping containers at a storage facility in Curzon Street. Around 30 contained parts from stolen cars. One that belonged to Arshad contained eight engines and gearboxes.

Arshad, aged 42, initially denied the charges but on the first day of the trial at Birmingham Crown Court, he pleaded guilty.

Lisa Spence, aged 34, admitted a lesser count of possessing an article in the use of fraud and received a suspended nine months sentence and ordered to do 100 hours unpaid work.

Zameer was jailed for five years and three months. He received a further three months for assault with intent to resist arrest. 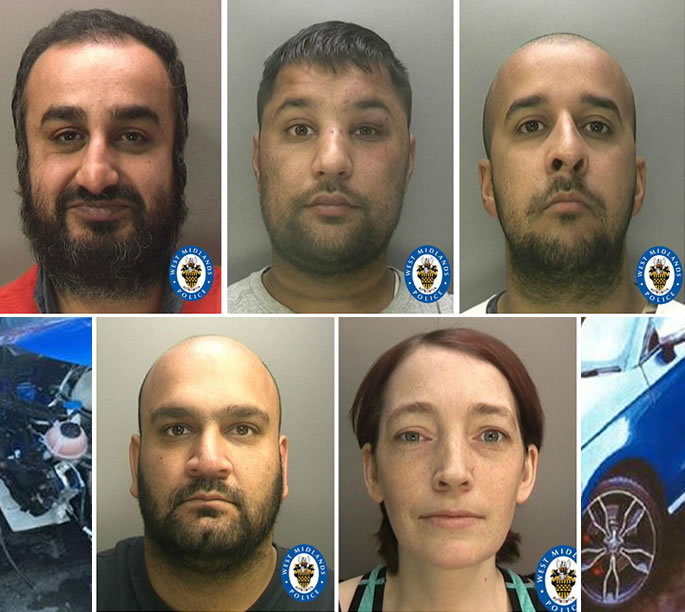 “This group was handling stolen cars on a huge scale… bigger than anything we’ve ever seen in the West Midlands.

“We believe hundreds of stolen vehicles have passed through their chop shops.”

“It’s unclear who was stealing the cars for them but our belief is the gang was ordering stolen cars to match those they’d bought at salvage auctions.

“We know they bought around 300 salvage vehicles since 2015 from one major dealer alone and we seized evidence showing they’d advertised 350 vehicles for sale on Gumtree and Autotrader with a combined value of £900,000.

“This group may not have been stealing cars but they were providing a very active market for car thieves and causing lots of pain and distress to motorists.”

WMP is pushing for improved regulation that will make it more difficult for criminals to put salvage vehicles back on the road after buying them.

This comes after a near 100% increase in vehicle thefts across the West Midlands over the past four years.

“This is an excellent result for every single road user.

“This gang of organised criminals has put the lives of us all at risk by putting dangerous vehicles back on the road with no safety checks whatsoever.

“This is why I have been calling on government to make a number of changes which will seriously disrupt the way in which organised car thieves conduct their illicit activities.

“It is common sense that any vehicle which is written off should have its MOT cancelled immediately and require a full safety inspection before it is readmitted to our roads.

“I have also been calling for tighter regulation around the availability of tools which are being used by thieves to steal vehicles, ensuring that they can only be purchased by those with a legitimate need to own them, such as mechanics and auto-locksmiths.

“This result is testament to the excellent work of our police officers in clamping down on chop shops and the organised criminals running them.”

A Proceeds of Crime hearing will take place in April 2020 to determine how much money the group needs to repay.

Dhiren is a journalism graduate with a passion for gaming, watching films and sports. He also enjoys cooking from time to time. His motto is to “Live life one day at a time.”
Two Indian Sisters killed in Student Nurses Accommodation
Indian Girls kick and beat Molester at Bus Stand