Chelsea Football Club’s Asian Star scheme will come back for a seventh year in the hopes of boosting Asian participation in all levels of football.

Seven previous winners have been signed with the academies of professional football clubs.

Launched in 2009, the Chelsea Asian Star scheme is set to return for a seventh time on May 25, 2015 at the football club’s training ground in Cobham.

Over 400 young Asian footballers are expected to attend the training program. They will be joined by Chelsea Football Club’s very own members, coaches and scouts at all levels of the game.

Participants will undergo tests designed and used by the Chelsea Academy to examine their speed, skill and ability.

They will also take part in small-sided matches to compete for a chance to receive professional training.

The winners will be invited to spend a year at Chelsea’s Foundation Development Centre, which is only a step away from reaching the club’s academy.

Seven previous winners have been signed with the academies of other professional football clubs.

Kamran Khalid, who won the Under-11 category in 2014, shared his unique experience: “I just played my natural game and tried to show off my speed. It would be my dream to play for Chelsea, so I am so happy to have shown the coaches my ability.” 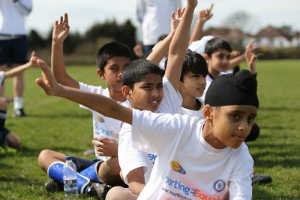 Other participants should not be disappointed. Just taking part in the program will provide valuable exposure to Chelsea’s experts, who will observe their performance to spot new talents.

The coaches will also interact with their parents to make sure the youngsters get the best out of their local training clubs.

The training program provides a huge opportunity for Asian football players aged between 9 and 12 to experience the game first-hand. It also allows them to explore pursuing football as a career option.

Most of all, the scheme demonstrates how football, and sport as a whole, is not limited to people from certain backgrounds.

One person who understands the importance of mixing culture within sport is British Asian Trust Ambassador and England batting coach, Mark Ramprakash.

An avid supporter of Chelsea’s training scheme, Mark says: “Sport can have a huge positive effect on young people and the communities they live in.

“To be returning for a seventh year shows interest is still there and I’m sure the coaches who attend will confirm the talent is there as well.”

He adds: “It is not just about finding the football stars of the future, it is about getting youngsters interested in sport in general, which in turn leads to healthier lifestyles for the children involved.”

“The opportunities that the programme offers can be of huge benefit to the young people involved and I wish all those taking part the best of luck.” 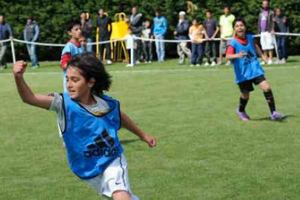 The Northampton defender calls for similar initiatives to be replicated up and down the country.

He believes it will encourage Asian parents to get their children involved in sports and pave the way for the next generation to promote Asian presence in football.

A 2011 census found that Asians made up 7.5 per cent of the total population in the UK. However, there are only eight British Asian football players with professional contracts in the country’s top four professional divisions.

The most recent example is Easah Suliman from Birmingham, who has been signed to Aston Villa.

The increasingly noticeable lack of Asian presence within football in the UK is a pressing matter and one that many sportspersons and spectators alike would like to see eradicated.

Initiatives, such as the Chelsea Asian Star scheme, with the right kind of support, are crucial for stepping closer towards creating a truly multicultural Britain.

Reannan is a graduate of English Literature and Language. She loves to read and enjoys drawing and painting in her free time but her main love is watching sports. Her motto: “Whatever you are, be a good one,” by Abraham Lincoln.
2015 Indian Premier League T20 Cricket ~ IPL 8
Bilkis Mahmood ~ Second Asian Female Football Agent