Bend It Like Beckham: The Musical by Gurinder Chadha

Gurinder Chadha delivers a magical spectacle with Bend It Like Beckham: The Musical showing at London’s Phoenix Theatre. DESIblitz chats exclusively to Gurinder and the cast to find out more.

"I think the music is amazing, and some of the songs are outstanding."

A vibrant and foot-tapping musical, director Gurinder Chadha has delivered a masterful production with Bend It Like Beckham: The Musical.

Adapted from the original 2002 smash hit film, the stage show is written by both Gurinder and Paul Mayeda Berges.

British Indian Jess (played by Natalie Dew) is a talented young football player who is torn between following in the footsteps of her hero David Beckham, and living up to family expectations of university, career and marriage. 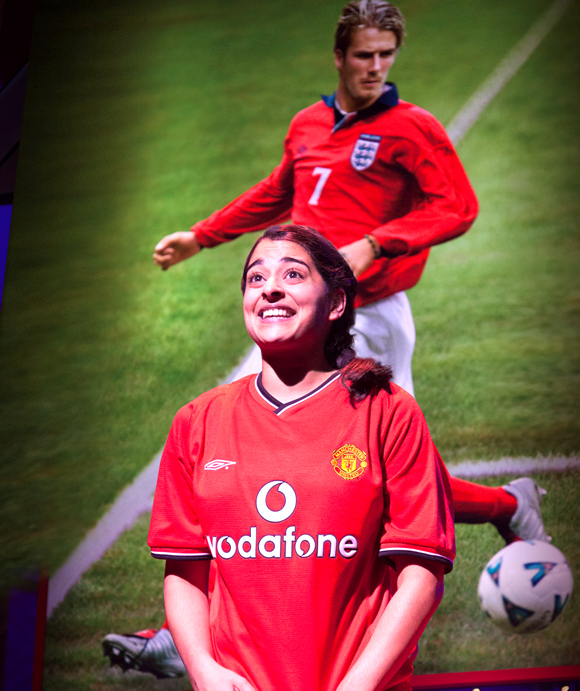 One the one hand she is forced to help with her sister’s extravagant wedding preparations, and on the other she sneaks out of the house for football tryouts.

On its release almost a decade ago, the film quickly became an iconic hit for many British Asians, particularly Punjabi’s from Southall, whom the story centres on.

In an exclusive Gupshup with DESIblitz, Gurinder tells us that while a sequel for the film was never on the cards, a theatre production was an attractive option:

“We thought let’s explore the idea of a musical. But once we started, I never imagined that we would end up with something quite as wonderful as the show I now see in front of me.”

Watch our exclusive Gupshup with the team of Bend It Like Beckham: The Musical here: 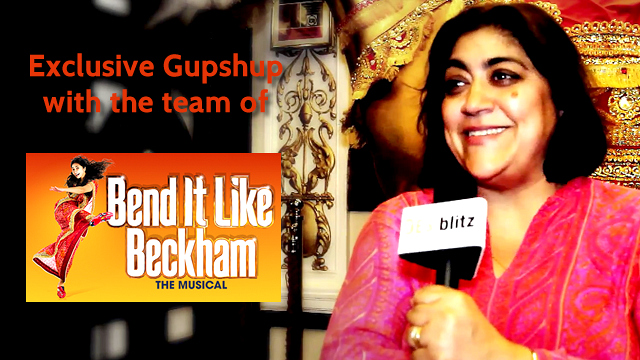 Music is of course at the heart of the production. Scored by Howard Goodall with the collaboration of British Bhangra composer, Kuljit Bhamra, the soundtrack boasts an energetic fusion of East and West:

Gurinder adds: “I think the music is amazing, and some of the songs are outstanding.

“We go from different cultural sides back and forth all the time and I think that’s what makes it such a good theatre experience,” she explains.

Natalie Dew who plays the lead character Jess admits that the music is also her favourite part of the show:

“It was scary to audition, I hadn’t done a musical before, so I didn’t have that much experience in the singing bit. It’s an amazing part, because the journey she goes through in three hours is epic,” she tells DESIblitz. 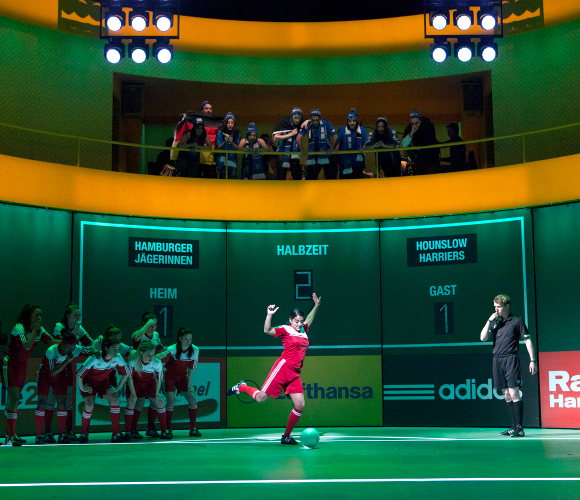 The choreography by Aletta Collins is high on energy and infectious. From lively Bhangra to foot-tapping street, the numbers are incredible!

When asked about their favourite numbers, Jamie, who plays football coach Joe, felt it was ‘Girl Perfect’ and ‘Result’, both performed by the football players, that were the ones to look out for. Preeya, who plays Jess’ sister Pinky, found that her favourite was the engagement number:

“It’s a fun number and I really love bhangra music – more so now, after being part of this show. Gurinder has taught us a lot about Punjabi music and I’ve grown really fond of it.”

The songs allow the central themes of the show to be explored further than they were in the film, such as the complexity of a mother daughter relationship, immigrant struggles and how the colour of one’s skin can affect one’s dreams being fulfilled.

As Preeya says: “There are so many characters that have their own story weaved in. It really represents the community. From dealing with your sexuality, finding love for the first time or pursuing your dreams whilst having your parents on your side.” 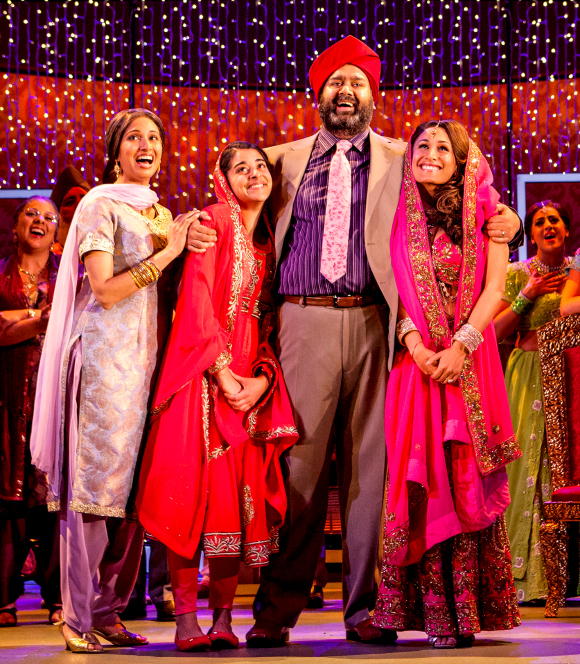 The messages conveyed through the lyrics, penned by Charles Hart, are both meaningful and heartfelt, with the final song, ‘Chardi Kala’, being a particular highlight.

Southall is at the heart of the production, which was not only where the film was mostly set but where Gurinder herself is from.

From the multicultural diversity to the slang and swagger to even the distinct shops there, the musical authentically recreates the west London suburb:

“The musical is something that I want the British Asian community to come and see, because there’s something for the grandparents to the grandchildren and everything in between,” says Gurinder.

As Gurinder says: “At its core, Bend It like Beckham is a story about finding your place in the world whilst remaining true to yourself and those you love. I think that is something that crosses any and all cultural and racial lines.” 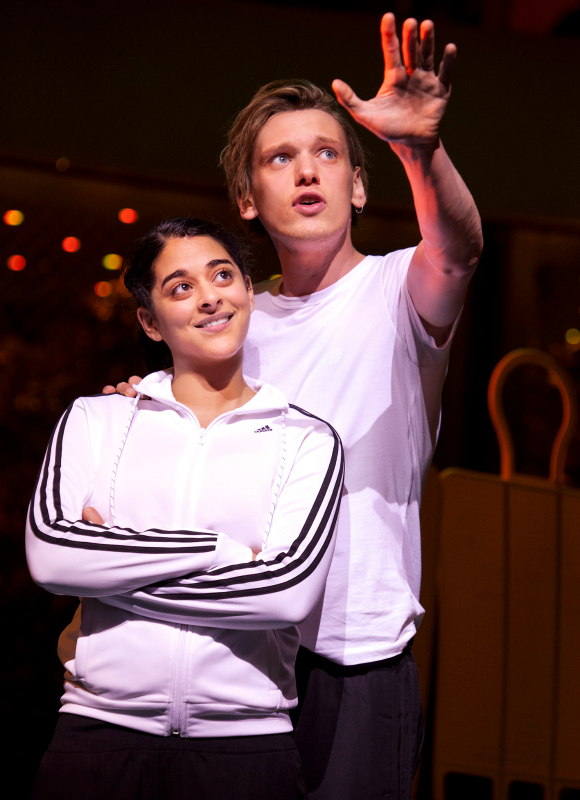 While the production does indulge in Bollywood glamour, it remains relevantly British through and through, and for Preeya, the magic of performing to a live audience is second to none:

“There’s something really magical about theatre, because it’s live, you have an audience. Being able to perform every night to an audience is very special.”

“And I think it takes a really good actor to be able to do that, because it hones your craft as an actor.”

And audiences will certainly not leave disappointed, as the response to Gurinder’s production has been phenomenal with standing ovations at the end of each show.

Guests included the likes of Naughty Boy, Madhu and Sulaiman from Signature, and Graham Norton. 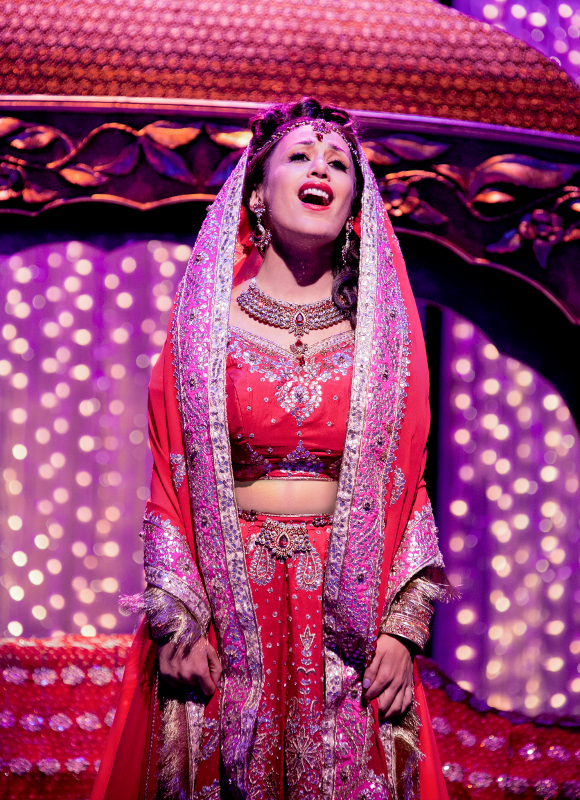 The well wishes from friends in and outside of the business have been truly heartfelt: “That’s how it’s been for most nights and it’s surpassing people’s expectations,” says Jamal Andréas, who plays Jess’ good friend, Tony.

And rightly so. Despite the film being released over a decade ago, Gurinder maintains its relevance even today, and the musical certainly highlights the continued need of British Asian productions that can tackle key cultural issues head on.

Bend It Like Beckham: The Musical is now playing at the Phoenix Theatre, London, until October 2015. Performances are Monday to Saturday at 7.30pm, with matinees on Wednesday and Saturday at 2.30pm.

Sonika is a full-time medical student, Bollywood enthusiast and lover of life. Her passions are dancing, travelling, radio presenting, writing, fashion and socialising! “Life isn’t measured by the number of breaths taken but by moments that take our breath away.”
Eternal Taal plays Dhol at Glastonbury Festival
Chris Martin plays Surprise Gig in India