There are severals rumours about Vicky Kaushal dating Katrina Kaif. Their leaked dinner date photo has got everyone talking.

A photo of their private dinner date was leaked

Speculations surrounding whether Vicky Kaushal and Katrina Kaif are dating has been on everyone’s mind.

The love life of Vicky and Katrina has been under question ever since the latter remarked how the pair would look good together.

On the talk show, Koffee with Karan, Katrina told host Karan Johar that she would love to work with Vicky because she thinks they would make a good pair.

Ever since Katrina made this remark, the gossip in B-town has been speculating whether the pair are romantically involved.

Vicky Kaushal has been in Bollywood’s radar after his breakthrough in Meghna Gulzar’s Raazi (2018) starring Alia Bhatt.

Vicky also essayed the role of the main protagonist in Uri: The Surgical Strike (2019), which went on to become a box office hit.

His stellar performances have resonated with fans and critics alike. Alongside his professional life, Vicky’s personal circumstances have also been in the spotlight.

After his break up with actress Harleen Sethi, Bollywood heartthrob Vicky has been linked with numerous Bollywood beauties.

Names like Bhumi Pednekar, Huma Qureshi and recently Katrina Kaif have been rumoured to be dating Vicky. 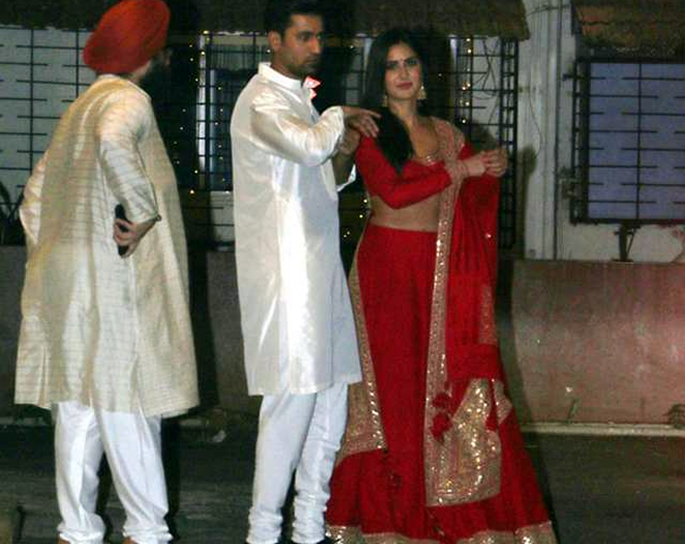 Katrina and Vicky were seen attending a Diwali party together on October 27, 2019. This sent the rumour mill into overdrive with speculation growing that the duo is dating.

Despite the actors having attended the party together, they left in their respective cars at the end of the night.

Vicky looked handsome in his kurta and trouser ensemble while Katrina looked stunning in a red lehenga by Sabyasachi Mukherjee.

There is no doubt Vicky and Katrina appeared amazing together.

Despite the unconfirmed rumours, sources close to both actors stated that they are “very much single and not dating.”

Since then, a photo of their private dinner date was leaked on social media. This has once again sparked dating rumours.

The picture was shared by a social media fan page of Katrina. In the photo, Vicky and Katrina are seen posing with chef Hemant Oberoi at his restaurant BKC in Mumbai.

The picture was uploaded with the caption:

“A movie announcement is hopefully on the way???? All the best @katrinakaif @vickykaushal09!”

Despite the possibility of Vicky Kaushal and Katrina Kaif working together, there has been no report confirming this news.

We wait to see whether the duo will be working together onscreen and if their supposed relationship blossoms off-screen.

Ayesha is an English graduate with an aesthetic eye. Her fascination lies in sports, fashion and beauty. Also, she does not shy away from controversial subjects. Her motto is: “no two days are the same, that is what makes life worth living.”
The Return of Mahesh Bhatt after 1999 with ‘Sadak 2’
What Deepika says about Work & Marriage with Ranveer