Amir Khan took to social media to show off the brand new £450,000 custom Lamborghini he has bought “as a treat”.

"Congratulations, such a beautiful car."

Amir Khan has shown off his new £450,000 custom Lamborghini Urus that he has bought “as a treat” for himself following his loss to Kell Brook.

The boxer finally faced off against his longtime rival on February 19, 2022.

However, it did not go Khan’s way as he suffered a sixth-round TKO loss.

Amir Khan earned £5 million for the fight and he has now spent £450,000 on a Mansory Lamborghini Urus, posing in front of the orange and black motor.

Alongside a fire and smoke emoji, he wrote:

Fans loved the flashy SUV and took to the comments section.

Another said: “Congratulations, such a beautiful car.”

Mansory is a luxury car firm that specialises in vehicle modification.

Khan’s new Lamborghini has a maximum speed of 205mph as well as 810bhp.

The new purchase is the latest in Amir Khan’s luxury car collection. 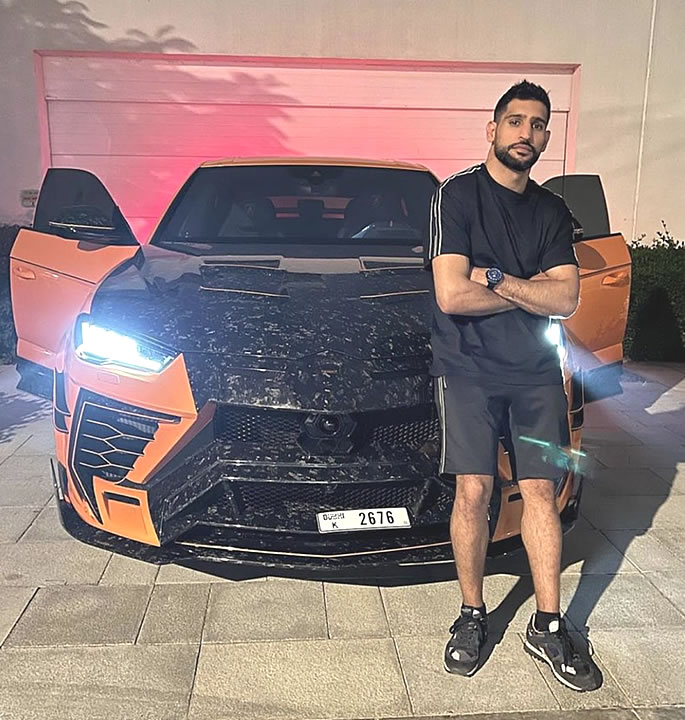 With a total net worth of £30 million, Khan is yet to retire from boxing despite hinting at it in the immediate aftermath of the Brook fight.

Khan is yet to exercise his rematch clause.

“I think the word on the street is true. Amir Khan doesn’t want to call it a day.

“He has spent a lot of time thinking about the fight in the last couple of weeks. He had 10 weeks to prepare and Kell Brook had six months to prepare. He feels hard done by.

“I don’t know whether that fight is even possible but he does have that rematch clause. For me, it’s time for Kell Brook to move on. Whether that’s to retire or to fight someone else.

“I can’t see it [a rematch] but Amir is convinced. We will hear what his reasons are in the next few days and we will take it from there.”

But Shalom said he would like to see Khan retire:

“I would say, you’ve had a wonderful career and you’ve inspired many boxers here.

“You’ve created a legacy for yourself. You’ll go down in the hall of fame. Why do you need to carry on?”

“You know, he is a fighter. He knows better than me what went on in that ring. He knows what his preparation was like.

“So, who am I to say what he should do. Whatever he has done, he has had a great career. For me, it was probably the right time to hang up his gloves, but he feels very differently.”

Meanwhile, Kell Brook said he would not mind a rematch.

“It was so one-sided, I don’t know what he can say. If he wants that rematch, I’ll dust them gloves off and do it again.”

Dhiren is a journalism graduate with a passion for gaming, watching films and sports. He also enjoys cooking from time to time. His motto is to “Live life one day at a time.”
Hareem Shah has Near-Miss with Lion Attack
The Rise of Indian Cryptocurrency Investors