Amir & Faryal’s TV Show Delayed due to a Bust-Up at Home?

A bust-up at Amir Kham’s mansion led to police being called out soon after they announced their appearance in a TV reality show.

"The filming of my forthcoming TV series has not been delayed"

A bust-up at boxer Amir Khan’s £1.3 million mansion led to a call to the police to investigate the incident just days after the Amir and his wife Faryal Makhdoom announced they were going to be part of a reality TV show.

The show called ‘Meet The Khans: Big In Bolton’ is being made for BBC 3.

According to a report in The Sun, officers from Greater Manchester Police (GMP) arrived at the Khan’s home to investigate if a man was behaving in an aggressive manner.

The police stated they were continuing with inquiries after confirming they visited the professional boxer’s six-bedroom detached home.

A source revealed that Amir Khan was worried that the incident would impact the schedule and delay the filming of the eight-part TV series.

However, when contacted, Khan confirmed this would not be the case and said:

“The filming of my forthcoming TV series has not been delayed in any way and will be out for everyone to enjoy in the near future.”

Amir Khan’s spokesman said that no offence had been committed.

Currently, Amir is spending time with Faryal at his in-laws’ home in New York, in America.

According to the couple, the series aims to “take us into the world of Olympic medallist and boxing World Champion Amir Khan and his influencer wife, Faryal Makhdoom.

“The series follows The Khans as they juggle a young family, their relationship and career pressures under the glare of modern media.” 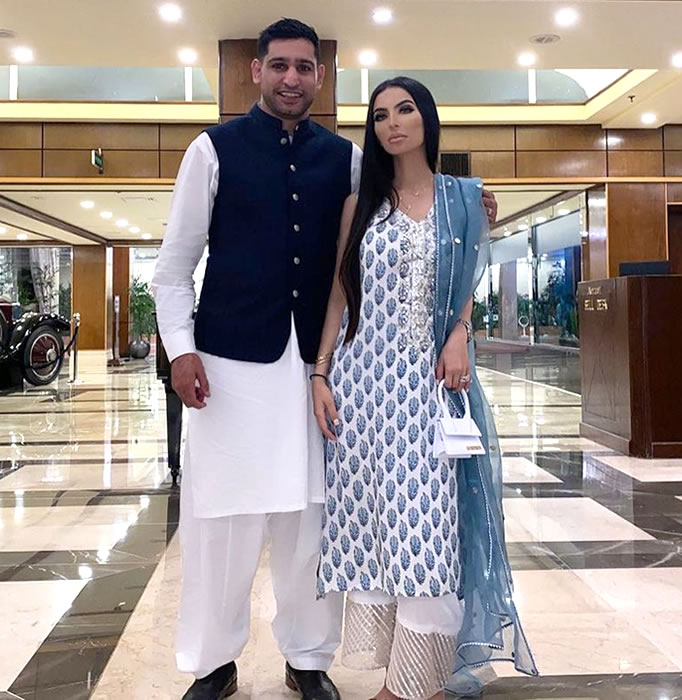 The interest in the couple escalated after Faryal and Amir’s relationship and marriage problems became public knowledge with Faryal openly speaking out against her husband’s family on Snapchat.

From accusations of domestic abuse, not being accepted by the in-laws, to being treated as the outsider in the family were among the things she expressed.

Amir had also been in the spotlight for having affairs.

This led to a series of outbursts from both sides. To a point in August 2017, when Amir announced he was splitting from Faryal on Twitter, saying:

However, this later led to a reconciliation between the pair and led to Amir distancing himself from his own parents and family.

His parents had called Faryal “evil” for what she did to their son. But they too reunited with Amir in 2019.

In 2019, Amir admitted his misdemeanours and said:

“I wasn’t husband of the year. I was a bit naughty at times.”

“I used to get caught misbehaving, going out, partying, clubs, going out with other girls and stuff. Fame is a bitch at times.”

Since, then the couple has displayed strength in their relationship along with being doting parents towards their three children, albeit extravagant at times.

Amir Khan has made a few trips to Pakistan with aims to develop the sport of boxing in the country.

Therefore, it will be interesting to find out more about the couple in their forthcoming series which seems to have not been marred by the bust-up incident.

Nazhat is an ambitious 'Desi' woman with interests in news and lifestyle. As a writer with a determined journalistic flair, she firmly believes in the motto "an investment in knowledge pays the best interest," by Benjamin Franklin.
Three Indian Women Rob Elderly Man in Delhi
Oxford Covid-19 Vaccine works ‘Perfectly’ say Researchers