Akshay Kumar and Union Sports Minister Rajyavardhan Rathore came together in a live chat to encourage more people to improve their fitness by doing sport.

"I do a very different kind of exercise, its mainly core exercises."

Bollywood star Akshay Kumar is one who enjoys working out and keeping fit. The actor shares his own fitness regime and diet to inspire others.

Now the actor has shared his fitness knowledge with his fans and encourages a fitness initiative with the help of Union Sports Minister Rajyavardhan Rathore.

The former Olympic silver medallist turned politician has always been an advocate for promoting athletics and fitness in India since becoming the minister in 2017.

Rathore is often seen praising Akshay on his social media. In one of his tweets, he called the Bollywood star a “true sportsman”.

He is now working with Akshay to spread awareness of health and fitness throughout India. Akshay teased a collaborative project on December 18, 2018.

Kumar posted a video on Instagram of him and Rathore working out along with the caption: “Coming soon, to an Instagram account near you Rajyavardhan Rathore.”

The two came together for a live chat session on Instagram where they talked about everything ranging from sports and fitness to life and success.

They also invited fans to ask them questions regarding health and fitness.

When talking about his own fitness routine, Akshay said: “I do a very different kind of exercise, its mainly core exercises and I hardly lift weights.

“Its more hand exercises like using the rings and climbing wall.”

Akshay went on to say his entire exercise routine can be completed within 25 minutes. Rathore pointed out that the routine is one of many ways to get fit, it does not have to be just lifting weights. 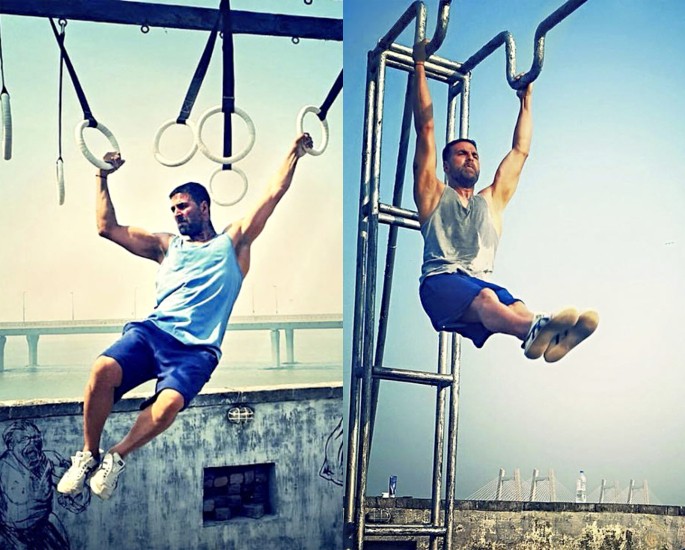 The Union Sports Minister said: “To all of you guys who are watching this, I think this fantastic. You know normally what happens is you go to a gym and you only see people who are heavy and are lifting heavy [weights].”

Rathore described Akshay’s fitness routine as “very practical”. It benefits core strength as well as hand strength and the circuit only takes 25 minutes to complete so it is beneficial for those who have busy lives.

Akshay defined fitness and health as one of the most important aspects of life, more important than wealth. He goes by the saying: “Your body is a temple and you should take care of it.”

Both Akshay and Rathore are big believers in sport and its health benefits, especially because there are approximately 30 million Indians who are obese.

It could also help find the next big successful sports star, but the priority for them both is for everyone to take up at least one sport.

Both Kumar and Rathore hope to have everyone, especially younger generations to take up at least one sport.

During the live chat, Kumar said: “I believe in sports, I believe everyone should take up at least one sport. One sport, it could be table tennis, badminton or cricket.”

Taking up sport has multiple health benefits, both physically and mentally.

Apart from the obvious weight loss and improved muscular strength, it also improves self-confidence and reduces signs of stress.

Akshay added: “It will find a future Olympic gold medallist, that is for sure but taking up one sport is the main concern and that is very important.”

For children to take up sports as exercise, their parents are an extremely important part as children will follow what the parent does.

If a child does choose to take up a sport, the parent should support them in whatever they choose. Akshay talked about his own experience with his father, he said:

“He used to support me throughout. He supported me in martial arts, in volleyball, in cricket, these are the three sports I played all my life.”

According to both, the parent should only be supporting their child in their activities not coaching, which is the job of a coach.

This is something frequently seen where parents are pushing their children to do their best. In actual fact, they do more harm than good.

Watch a Segment of the Live Chat

Their latest initiative is to encourage everyone to take up at least one sport for the health benefits they possess.

The importance of health and fitness was talked about in detail during their Instagram live chat and they want it to be a major aspect of people’s lives.

Akshay Kumar and Rajyavardhan Rathore’s initiative may encourage more people to take up exercise. Something that needs a lot more promotion when it comes to the growth of obesity in India and worldwide.

Dhiren is a journalism graduate with a passion for gaming, watching films and sports. He also enjoys cooking from time to time. His motto is to “Live life one day at a time.”
Waxing, Threading or Microblading for Desi Eyebrows?
7 Effective Desi Remedies for Gastritis and Digestion Problems