5 Real Indian Weight Loss Stories you Have to See

Losing weight with the abundance of tasty foods, snacks and drinks can be a challenge for Desi people. Here are five successful Indian weight loss stories.

She began with short walks which eventually became the gym and swimming.

Men and women have been sharing their successful Indian weight loss stories which may inspire others to lose weight.

People do it to feel good as well as the obvious health benefits that come with weight loss.

However, losing weight is a challenge for some people who try all sorts of methods in the hope that it works.

Fad diets are one big challenge. People research diet plans which say that it helps with weight loss when they do it, however, it turns out to be a fad with no health benefits.

Gym memberships are another which many try, especially as a new year resolution. It does not last however with around 67% of memberships going unused.

Although some people do lose weight, it is temporary as bad eating habits resume and the weight is put back on.

People have shared their own experiences of losing weight through a number of methods to great success.

Anthony Prasad admits he was never active, even in his childhood. It came to a point that his inactive lifestyle became a worry for him because he was neglecting his health.

When he went to college, Anthony decided to do something about improving his health.

Since beginning his weight loss journey in 1999, his weight fluctuated. It began at 76kg, he then dropped 20kg, it increased and he ended up weighing 88kg, only to lose 32kg.

In that period, he never went to the gym.

Anthony maintained the weight loss when he finally set foot in a gym in 2014.

He initially began with push-ups, but then overhauled his diet to maintain a healthy lifestyle. Anthony stuck to a strict diet and junk food was a big no.

Although this diet helped him lose 32kg in just three months, he was lacking vital nutrients and his blood pressure dropped.

In 2014, he finally took his friend’s advice and joined a gym to begin weight training. Anthony goes to the gym five days a week where he does weight training exercise.

He maintains a low carbohydrate diet due to its simplicity and his diet is comprised of healthy fats and proteins.

Anthony’s weight loss story proves that it can be achieved by changing the diet with the gym only being part of the experience. 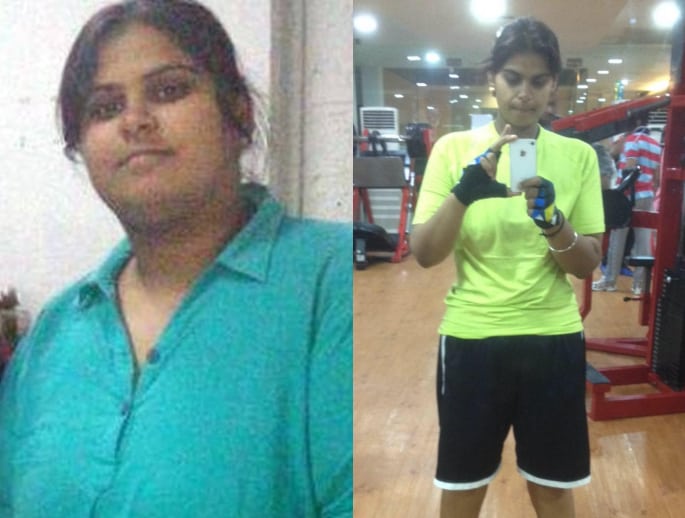 Pallavie Kakkar is one of many people who tried the crazy diets and gym routines.

While it did work for her, the effects were temporary and it all came back.

The excess weight became a significant problem when Pallavie moved to Chandigarh for work in 2012.

Her hectic work life meant she put on weight especially as she was struggling to adapt to the new city.

Whenever she felt morally low, junk food was her escape. Soon it became an issue when Pallavie found that was 132kg.

It also became a health issue as she began suffering from severe back pain which turned out to be gallbladder stones, which required an immediate operation.

It was then when she decided to lose weight when the doctor gave her ultimatum. Lose weight or suffer from potential issues like diabetes in later life.

She began with short walks which eventually became the gym and swimming.

Pallavie maintained her routine for over a year and admitted that it has been difficult, but it has had a positive effect.

“The journey of coming down from 132kg to 68kg has been tiring, both physically, and emotionally.”

“But I’m much better for it, and I’m still in the process of losing a few more kilograms.”

Pallavie’s diet is also drastically different. Gone are the junk food and its place is fruit, vegetables, proteins and brown rice.

Staying well hydrated is a major factor, according to Pallavie.

She said: “The most important part of your diet is water, four to five litres a day works for me.”

It may have been a difficult journey but maintaining it will have profound benefits like it has with Pallavie. 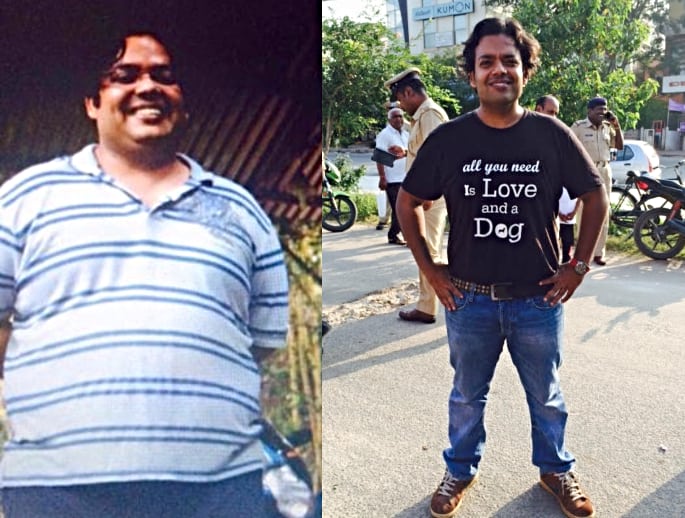 In 2015, Shekhar Vijayan weighed 125kg and it affected him physically and mentally. He could never find clothes his size and when a piece of furniture he was sitting on broke, he decided that he wanted to lose weight.

He also feared that his unhealthy lifestyle would put him at risk from many diseases in the future.

Shekhar began walking just over one mile per day which gradually became over three miles of running in a bid to build stamina.

He runs nine miles every day whether it is in the morning or at night and he loves it. He said: “I just love the sound of my shoes hitting the road or stairs and the sweat trickling down my body.”

Shekhar loves his appearance and is proud that he can fit into his nephew’s clothes. Shekhar added: “I wear my 16-year-old nephew’s T-shirts and jeans and they fit me like a dream, this gives me such a high!” 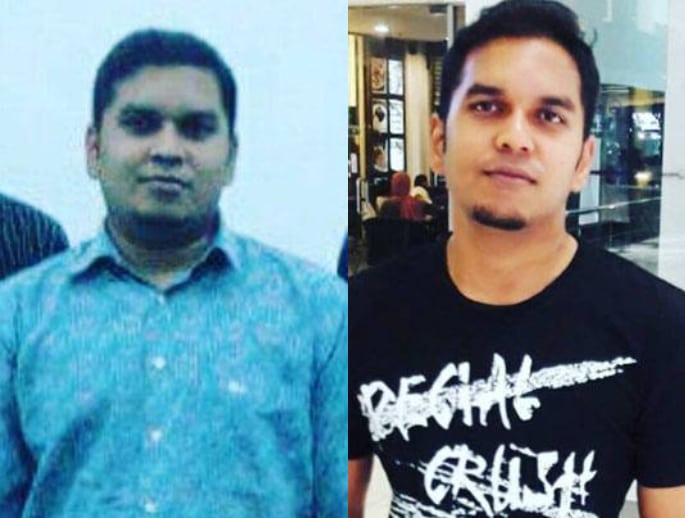 Shashi always remembered himself as a plump 12-year-old who ate even more after graduating from college. His heaviest was 98kg in November 2015 and it was affecting his mood.

He said: “I couldn’t concentrate on work and was extremely low on confidence.”

Not only that but Shashi always felt tired. He added: “I couldn’t stand for long periods of time and was always confused, this is when I decided something needs to be done.”

Shashi began looking to Google for advice, however, the many options confused him even more. But he overcame that and began exercising.

After his first day, he already felt better and decided to make it permanent. Although he didn’t see the results, others around him did.

“I didn’t lose much weight. But those around me started pointing out how I’d started looking fitter and better.”

“The compliments really helped me regain the confidence I’d lost.”

In just one year, Shashi went from 98kg to 64kg and felt more confident and is giving advice to those looking to lose weight.

“To lose weight you need to burn more calories than you consume, so you can’t just go an eat an entire cake after exercising for an hour.” 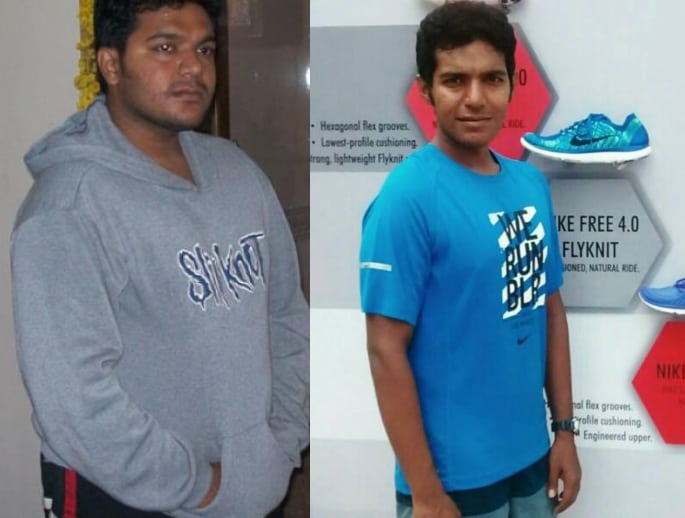 October 2009 was when Shreyas Karnad decided to change his lifestyle by losing weight. He was diagnosed with many health problems as a result of his weight which was 120kg.

He joined a gym and accompanied with it, healthy eating.

Shreyas gave many up processed foods and took up weight training. The results were minimal, it was then that he hired a personal trainer for three months. He said:

“My trainer asked me to maintain a diary and make note of all that I ate every day.

“He set me up for a fitness program that included 70% cardio and 30% weight training.”

The continued persistence saw Shreyas able to walk two and a half miles in 30 minutes. It saw him lose weight while also increasing his cardio.

He completed his first full marathon in September 2011 in a time of around six hours. At the end of 2012, Shreyas’ weight decreased to 62kg.

Currently, Shreyas has competed in over 50 running events, most based in South India.

His persistence to lose weight will inspire others to do the same.

Losing weight is a challenge, however with ongoing determination, it is possible to achieve your fitness goal.

The five success stories were achieved in a number of ways. Intense gym training and diet overhaul are the two main reasons.

It is also every person’s will to lead a healthier lifestyle.

They are just a few successful Indian weight loss stories which will help other people with their weight loss.