Aishwarya Rai Bachchan made a number of appearances in both the UK and India this week. She attended the opening ceremony of the Common Wealth Games in Glasgow, as well as going to Downing Street, and Chennai in India.

Ash represented the watch brand Longines at the Commonwealth Games.

Aishwarya Rai Bachchan was seen in the UK this week, making an appearance in Glasgow at the Commonwealth Games opening ceremony. She wore a sleek black trench coat, and her long, thick hair was tied into a bun.

Ash was representing the luxury watch brand Longines, for whom she is the Ambassador of Elegance. She was accompanied at the event by the Longines President, Walter Von Kanel.

Longines produce the Official Watch of Glasgow 2014, which is a chronograph made of steel.

This watch is part of their Conquest Classic collection and was modelled by Ash as an accessory to finish off her outfit for the Commonwealth Games ceremony.

As well as this appearance, Ash has also been seen recently at Number 10 Downing Street, as she attended a reception with Samantha Cameron. 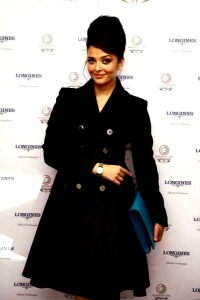 This event was held as a celebration of the achievements of the international cleft lip and palate charity, Smile Train.

Smile Train is an international organisation which works towards providing treatment to children from all around the world with cleft lips and palates.

This reception, whilst generally commemorating the charities work, was specifically held to mark the charity’s one millionth surgery to cure this problem.

Ash spoke as the Goodwill Ambassador for Smile Train:

“There are so many of us who lead such blessed lives. I truly believe it’s time to share our blessings.

“There are a lot of children with clefts around the world who so desperately need help, but can’t receive timely care because their families cannot afford this surgery or are ill-educated about this condition. 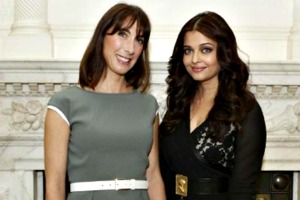 “It’s time we smiled together in our lifetime – healthy and happy!”

Ash has also appeared in a short film made to promote the work that Smile Train does. In the video, Ash imagines all of the ways in which her life would have been different if she herself had been born with a cleft lip or palate.

Moving to India, Ash returned to Chennai this week as well.

The Bollywood actress wore a beautiful red Sabhysachi sari as she attended the launch of LifeCell’s public stem cell bank in Chennai on July 28th 2014. LifeCell elected Ash to be their brand’s goodwill ambassador in October last year.

This outfit contrast with the star’s usual Western attire, and was very fitting for the important event she attended in India.

Ash spoke of her experiences giving birth to her daughter, Aradhya, saying: “I feel blessed to have received such as gift.”

The actress also talked about her love for India and the city of Chennai: 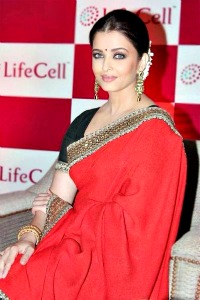 “You realise that the time flies every time you visit Chennai and it has been long since I visited last. The people here have always been very warm to me and I always feel at home here, thanks to the love I receive here.”

Aishwarya Ash Bachchan’s recent appearances in both Britain and India show her playing the fashionable star, but they also demonstrate her using her celebrity status to further some genuinely good causes.

It is only to be hoped that Ash will be followed by more South Asian stars who see their growing international fame as a way to help charitable causes and publicise events like the Commonwealth Games to their Asian fans.

Eleanor is an English undergraduate, who enjoys reading, writing and anything media related. Aside from journalism, she is also passionate about music and believes in the motto: “When you love what you do, you’ll never work another day in your life.”
Kick ~ Review
Bollywood Stars in America