Abdul Ahmed is a British Asian tennis star who is beginning to rise up the ranks. Abdul has ambitions to play with the very best in world tennis.

Abdul Ahmed is a young racquet sports athlete from London, rising up the ranks in the world of tennis.

With very few British Asian players on the men’s tennis circuit at the moment, Abdul is determined to reach his ultimate goal.

He wants to be the first British Asian professional tennis player to compete on the men’s ATP (Association of Tennis Professionals) circuit.

He is playing on the Futures Tour under the International Tennis Federation (ITF) Pro circuit.

Ahmed has the best people and set up around him. He trains in London but also has a base in California, USA.

Abdul’s parents, particularly his father has always been very supportive of his chosen career path.

Despite being a late starter in tennis, he is one of the youngest to feature in global events.

“The age gap in tennis has shifted so much. There are so many players that are breaking out at a later age.”

He is in the most exciting period of his tennis career at the moment. Abdul says:

“I think I am probably in the best phase of my tennis career, in terms of playing my best tennis.”

With so much happening for Ahmed sporting wise, let’s take a closer look at his tennis journey: 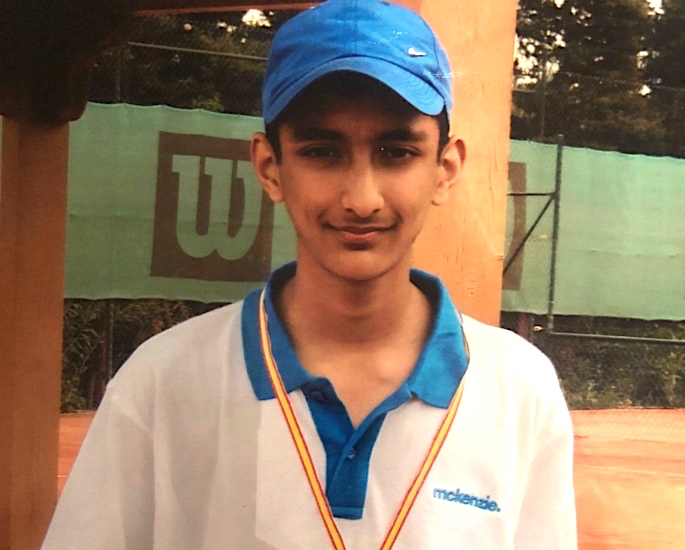 Born in Goodmayes, London, Abdul Sammad Ahmed has a background linking back to Pakistan.

His both parents were born in Pakistan. While his mother Shahnaz Ahmed, a housewife is from Rawalpindi, Abdul’s father, Mohamud Ahmed, is a pharmacist who originally belongs to Jhelum.

With his grandparents moving to London, his father also came to the capital at the age of 3 or 4.

Ahmed had an interest in tennis from the age of 7. But the sport became serious for him at 17.

During the early days, he also played for Ilford Cricket Club, which was run at the time by former England captain Nasser Hussain and his late father Joe Hussain.

But gradually the frustrations of team results got the better of him. Ahmed mentions the main reason for tilting towards tennis:

“I enjoy cricket, but I struggle in a team environment. It’s because you can play well individually, but sometimes the team will not perform as a whole. Results did not go your way.

“With tennis, you have full responsibility for your own actions.”

Abdul’s tennis journey began when his father took him to a talent ID day in Ipswich. To get more people actively participate in tennis, this was an initiative founded by former British professional tennis player Tim Henman.

With coaches finding Ahmed’s level of play quite impressive, they gave his father the advice that he should join a club. Thus Abdul became a member at his local club, Cranbrook Castle.

Within six months, Ahmed made the progression from court 1 (the lowest level) to court 5 (the highest level) at Cranbrook Castle.

During his junior career, he continually underwent training and did play in UK tournaments including the 2012 London Youth Games.

This was a big step as he was now ready to begin his journey on the men’s circuit. To brush up on his game, Abdul also spent time in Valencia, Spain. 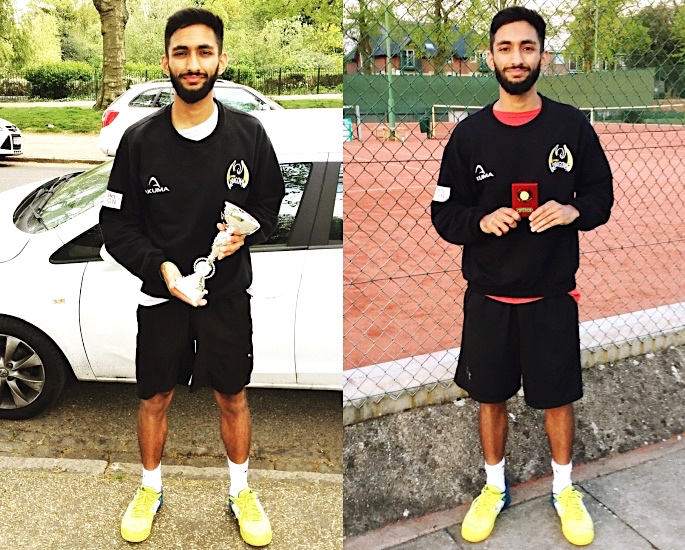 Abdul’s first big achievement came at the age of 10 as he was number 1 in the rankings.

At the age of 17, he was number 1 in the county of Essex, and within the top 100 UK rankings under the 18 below category.

His most outstanding achievements came between 2017 and early 2018, winning seven tournaments. From the seven, four were national and three were regional level tournaments.

The competitions he won in chronological order include:

Barring the Chiswick Open, Ahmed was triumphant in straight sets. The Kingsley Event had to be cut short due to the weather.

Winning the Leamington Open was memorable for Abdul:

“That was a special one, as it was the first proper tournament win on the clay court.”

Ahmed even got to the semi-finals of a big tournament called the Strathgryffe British Tour where he lost to Pedro Sanchez (ESP).

Following a gap year, alongside tennis, Abdul made the decision to study BA Accounting and Business at the University of Westminster.

Upon graduating in 2018, Ahmed made the move to the ITF Pro circuit.

Abdul took a positive decision by completing his education. While he wants to achieve a lot more in the game, he has a good backup plan to fall on. 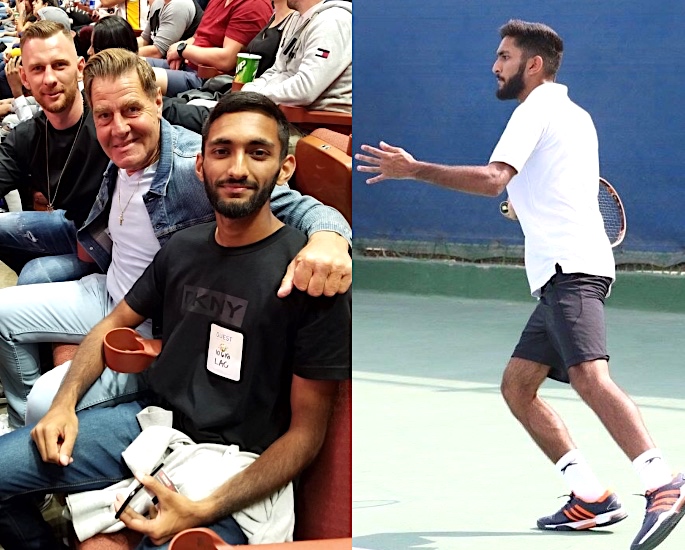 Abdul was first spotted in 2005 playing tennis by Anshu Tanuja from London who then went onto coach him. Anshu who is an accredited qualified level 3 coach grounded Ahmed’s game really well.

After parting ways with Anshu, Abdul moved base to a bigger centre and was coached by Steven Russell from the capital.

Post-leaving Steven, while playing in several competitions, Abdul was travelling with a few coaches that he met during tournaments. One of them was former world number 12 Younes El Aynaoui from Morrocco.

Aynaoui has beaten the likes of Roger Federer (SUI), Novak Djokovic (SRB) and Rafael Nadal (ESP). Ahmed spent a few weeks with Aynanoui during a tournament held in Bahrain.

Speaking about his experience of working with Ayanoui, Abdul mentions:

“Ayanoui caught me when I was playing one of my matches in Bahrain and he said ‘look are you interested for 3 weeks working with me.’”

Ahmed did not compete in the March 2017 Bahrain F1 Futures tournament. But instead was invited as a hitter for the players.

Abdul got a lot of confidence from Ayanoui, especially on the tactical approach to the men’s game.

Justin who was formerly in the top 200 rankings is amongst a handful of coaches, who are accredited at level 4. He is a renowned coach around the world.

Lane gave Abdul assistance with his mental side, along with loosening and sharpening up everything he had learnt with previous coaches.

In 2018, Ahmed improved his game further under the guidance of British level 4 coach and former player Matthew Porter. Matthew was once in the top 50 UK rankings.

Boxing Trainer Joe Goosen has also been helping and mentoring Abdul on a frequent basis.

Prince Sports sponsor Ahmed by providing him with tennis racquets, equipment, grips and so on.

While this sponsorship deal helps Abdul’s quest to reach the top, he is looking for sponsors to climb the ladder a little more quickly. 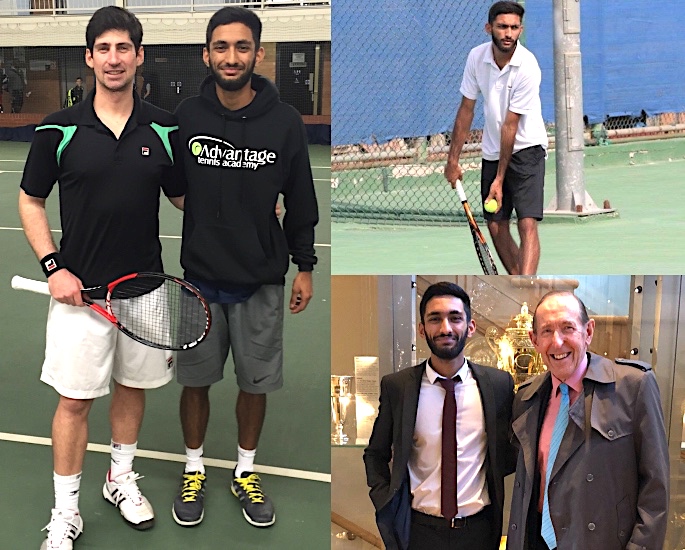 Training and fitness are keys facets to Abdul’s game.

Most British and international coaches appreciate his fitness level. His fitness and movement is of a top 100 player.

Ahmed regularly attends a training camp in America. Prior to any big set of tournaments, Abdul flies to the USA as he has a team set up there. He is part of the Advantage Tennis Academy in California.

The person who is helping him the most there is a coach named Vasilis Psyrras.

Vasilis who was previously coach to former world number 1 women’s singles player Jelena Jankovic from Serbia helps Ahmed with the mental and tactical side of his game.

Psyrras manages the operational side of things when Abdul is in the USA.

Ben Cooper from Red Level fitness advises and takes care of the nutritional side for Ahmed.

With so much dedication and motivation, Abdul has a comprehensive training regime.

“A lot of focus during my training sessions is around my serve. When I am with my coach, we do a lot of technical work, studying the elements and put them into practice.

“In terms of actual drilling; we begin with warming up in the service boxes. Then consistency drills follow whereby we have to rally a 100 balls.

“Then we go into specific drills, such as my serve.  So we set targets of where to serve. And I can only move to the next target aim, once I have hit a certain number of serves in a particular area.

“Finally, we put what we did in the drills into points, putting together the whole game.”

As part of his development, Ahmed went to the All England Club (Wimbledon), following an invitation from John Beddington. John arranges various tour events. 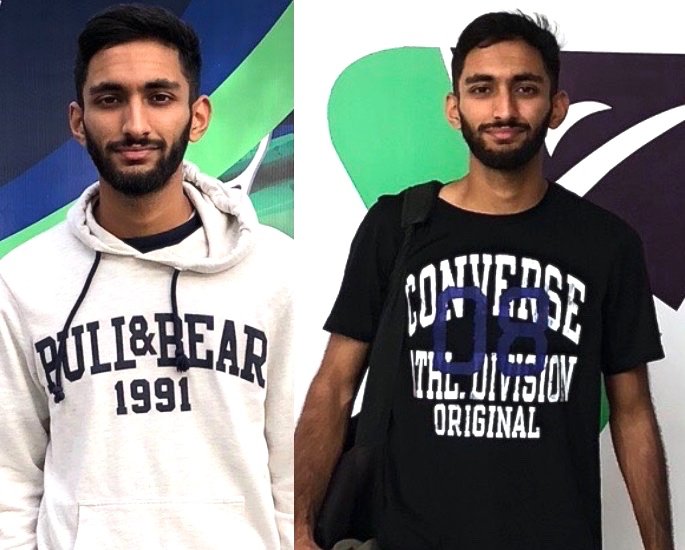 Abdul travelled to his parents country of origin during December 2017, playing in the Pakistan F3 Futures tennis tournament.

Ahmed got to the last round of the qualifying stages of the clay-court tournament held in Islamabad. Many Russian players participated in this event.

Talking about his experience of playing in Pakistan, Abdul told DESIblitz:

“As I had gone back to Pakistan after 16 years for the tennis, I was really surprised that how much talent there was in Pakistan, especially with everyone involved in cricket and hockey.

“The standards are very high there.”

On the trip to Pakistan, Ahmed had the opportunity to meet Pakistan Davis Cup players Shehzad Khan and Aqeel Khan.

In their discussion, Shehzad and Aqeel also felt the country had immense talent, with the tennis future looking bright in Pakistan.

Abdul has also been in contact with 2010 US Open doubles finalist Aisam-ul-Haq Qureshi from Pakistan.

Abdul did plan to arrange a meeting with him when he was in the UK for Wimbledon 2017. But due to unforeseen circumstances, this did not materialise:

“We were arranging to practice together, but I think there was some emergency and he had to go.”

At the moment Ahmed is playing for Great Britain. In reply to a question about whether he did contemplate representing Pakistan, Abdul said:

“It was a very lengthy discussion I had with my team.

“We did think about me representing Pakistan because of more sponsorship opportunities. But then that would have meant having to shift and train in Pakistan.

“The facilities there are good and improving. But I feel I will get more if I am here or in the states.”

Ahmed said he is open to the idea of competing under the Pakistan flag when asked about the Olympic Games:

“If it was something like the Olympic Games, I would definitely consider playing for Pakistan.”

His Father: A Pillar of Strength 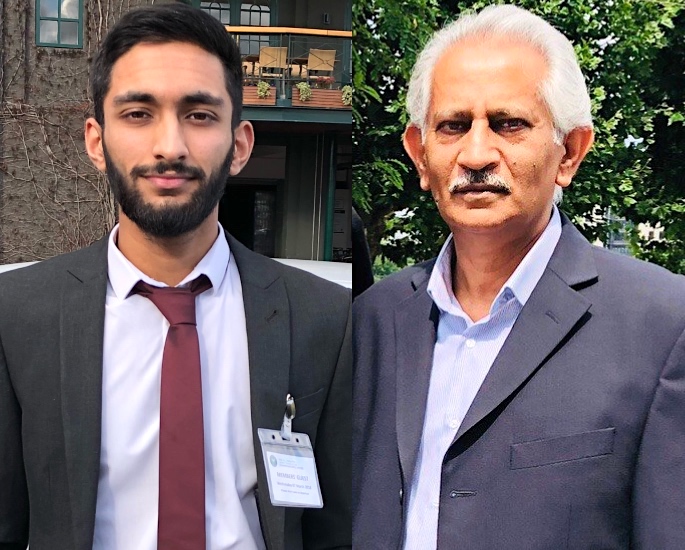 Off the court, Abdul’s father, Mohamud has been very instrumental. The journey would have been impossible and incomplete without his support.

His father puts a lot of time behind the scenes, giving Ahmed key advice and easing the pressure off him when needed. This enables Abdul to keep his focus and direction on tennis.

Crediting his father on being a huge help in his development, Ahmed states:

“Without my father, I would definitely not be in the position that I am in.

“I know I sacrificed a lot to be here. But he’s sacrificed even more. He always had belief in me. He’s helped me all through the low points. He’s been there every step of the way.”

His father is with him at every tournament. He does not miss any event, including those taking place overseas.

He also oversees Abdul’s training sessions too. Hence he plays a big part in his tennis.

With a big influx of British Asian tennis players coming through in East London, many of them call Ahmed and his dad for direction.

The father-son duo have never been shy of helping any individual.

“My father has almost carved a pathway for Brtish Asians, guiding and giving them advice.”

With sustainable financial backing from prospective sponsors and support of his father and coaches, Ahmed hopes to continue his development.

He will continually play on the Futures tour across the globe, including Pakistan. This will hopefully pave the way for further success at the highest level of tennis.

Abdul Ahmed is a positive and humble British Asian role model who firmly has his feet on the ground.

While still young, he has every chance to compete against the very best of world tennis.