Abdul Rafiq is a prominent and vocal member of the English Defence League (EDL). A British Pakistani, Rafiq marched with the extremist organisation during a protest on October 11, 2014 in Birmingham.

Rafiq only identifies himself as British and can be spotted on the street carrying a Union Jack flag.

Seen in the midst of the English protestors and marching alongside them was the British Pakistani, Abdul Rafiq (43).

A token brown face in the white crowd, Rafiq, who is an astute supporter of the EDL, regularly travels across the UK with them for protests.

Rafiq has made a name for himself over the years in being a well-known figure in Glasgow and is seen as a somewhat of a local celebrity in Scotland.

His notoriety initially began from his love of football and in particular, the Glasgow based Rangers Football Club. 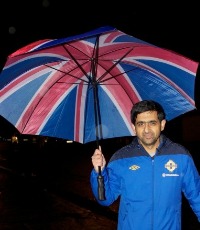 Rafiq regularly attended the games between his beloved Rangers and fiercest rivals Celtic, a local derby nicknamed the ‘Old Firm’.

The derby is always a hot bed for controversy after being linked to the Queen, Catholics, the Pope and more.

Rafiq is a proud supporter of Rangers and has regularly been recorded on camera shouting racist and offensive chants towards Celtic fans.

The violence and offensive behaviour exhibited by Rafiq has subsequently led him to have a ban from attending any Rangers games at their Ibrox stadium.

His verbal and physical outbursts have not been limited to only the football terraces.

A prominent member of the EDL, Rafiq also attended the protest in Birmingham, which happens to be one of the most multicultural cities in the UK, and houses a big Asian population.

Birmingham police were more than prepared to deal with the protesters, by having a heavy police force present on Broad Street and its surrounding areas.

In total there were 10 arrests made on the day, including the police arresting members from the EDL and the opposing Unite Against Fascism group who had stood nearby.

Superintendent Rich Baker, of West Midlands Police said: “We have been planning for weeks to minimise disruption to those who live, work or were visiting the city on the day.” 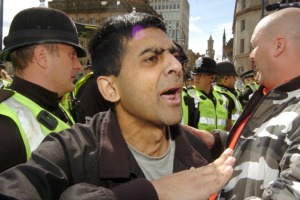 While there were no reports of Rafiq getting into trouble at this protest, he has caught the attention of police at other marches on more than one occasion.

One example of his previous encounters with the police while on EDL duty was his run-in with Asian men in Bradford, back on October 12, 2013.

He told Leeds Magistrates Court how he had been threatened by 10 Asian men for being involved within the EDL before retaliating back with a tirade of swearing.

He was subsequently fined £110 for admitting to a public offence order.

Despite being born to Pakistani parents, who came to the UK in the 1960s, Rafiq only identifies himself as British and can be spotted on the street carrying a Union Jack flag and often wearing a Rangers Football Club jacket. He says:

“I am an active pro-unionist. Ever since I was a kid I loved the Union Jack. I love living in the UK.”

His work with the EDL has caused a rift between him and his family, he has been shunned by his parents and siblings and even the British Asian community as a whole. He says: “I get death threats online.” 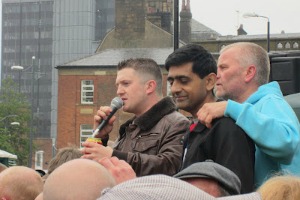 Since joining the EDL, he has become somewhat of a poster boy for the organisation. Former leader of the group, Tommy Robinson has often taken pictures with Rafiq to show the group are not racist, including one at the Rochdale protest back in 2012.

Although he has received a lot of abuse from the Asian community there are no signs of his support for the EDL waning. In fact, he wishes to persuade more Asians to sign up.

The EDL is a minority within the UK and being the only Pakistani in the EDL, Abdul Rafiq is an even smaller minority.

But despite being the odd one out, Rafiq continues to be a well-known figure in the Defence League, by both supporters of the group and the oppositions, and will continue to spark debate and controversy across the UK.

However, one wonders how much Rafiq, as an Asian man first and foremost, truly feels part of the incredibly bigoted English Defence League.

Amarjit is a 1st class English Language graduate who enjoys gaming, football, travelling and flexing his creative muscles writing comedy sketches and scripts. His motto is “It’s never too late to be who you might have been” by George Eliot.
Soho Road BID celebrate First Community Diwali
Ravinder and Ajay Soni to serve 12 years for GBH