The British Curry Awards celebrated its eighth year with a magnificent line up of A list stars from the British Culinary Industry. The event took place at the dynamic Battersea Evolution in Central London on 26th November 2012. DESIblitz were there at the event to get all the reactions.

On 26th November 2012, Battersea Evolution in Chelsea witnessed the largest gathering of Restaurateurs, Celebrity Chefs, Food Gurus and Entrepreneurs from across the country to assemble for the British Curry Awards.

This year the British Curry Awards yet again proved to be a huge success, recognising the special achievements of individuals and businesses connected with the Food Industry.

The award ceremony brought together the unsung heroes from the UK Curry Industry, using this space to promote a range of food cuisines and to encourage the younger generation to follow in their footsteps.

Naturally some of the big names attached to the industry were also present as VIP guests or as judges at the event. 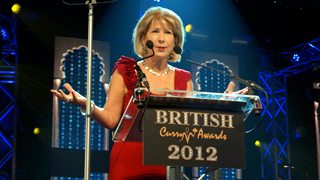 The British Curry Awards is one of the biggest events associated with the food sector, and Prime Minister David Cameron once referred to them as the ‘Curry Oscars.’ In 2009 David Cameron was chosen to be the Key Note speaker at the event.

MP and star of ‘I’m a Celebrity Get Me Out Of Here’ Jenny Bond opening the event, referred the ceremony as the ‘Oscars of the Curry Industry.’

At this years event there was a special mention on the positive impact that the Olympic games had on local businesses. Food businesses were involved in some capacity at the games and enjoyed a fruitful period during this time.

For many the night was a double celebration, not only winning an award but to reflect on a successful year, which has been very rare for some in times of economic turmoil. 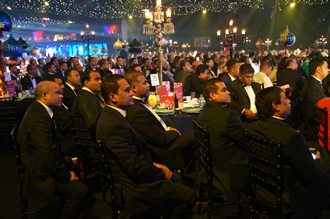 The British Curry Industry is a key source of revenue for the UK Economy with over 10,000 restaurants in the UK, employing 80,000 people and generating a turnover of £3.5 billion. Winners at the event represented people and businesses from all key UK regions.

Bangladeshi Business Tycoon Enam Ali, who is also the proud owner of the famous Le Raj Restaurant in Surrey, has founded this prestigious event.

We spoke with Mr. Ali on the eve of the event, asking him of how he came up with the idea of starting the British Curry Awards and his take on food. He exclusively told DESIblitz:

“We have to encourage the deserving people who have done such a wonderful job. I think it’s important that people doing a fantastic job and getting outstanding results should be recognised and deserve a thank you.” He added:

“I love good food, I can read food. I can go to your home and you give me a cup of tea and I can tell what is in it not in terms of ingredients, in terms of the agenda behind it, whether you gave it with a smile or did you give it to me with just formality, it is a god given gift.”

Mr. Ali is also a patron for several charities, so when speaking about his important role in this field he told DESIblitz:

His charitable work has helped him to repeatedly organise this annual event in a big way. His attachment of helping others, has further boosted the image of this already reputable event.

Commenting on the event MP Jenny Bond said: “I have driven 220 miles through the floods of Devon to be here tonight at the most prestigious awards in the curry industry.”

Dragons’ Den entrepreneur Theo Paphitis told us what he expected from the evening. He said:

“We are looking forward to a very good meal, which Mrs P is very anxious to be served. When I told her it’s a Curry Awards, she got her glad rags on and she was out of the door.”

We caught up with UK Independent party leader Nigel Farage who told us: 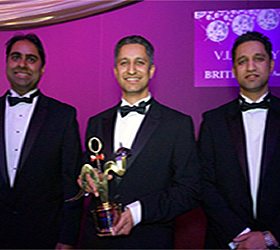 “What a night like tonight says to me is this country has a remarkable range of relationships around the rest of the world. It’s remarkable what was an empire has become a friendly club. I don’t think we put enough emphasis In Britain on the commonwealth countries, on our relationships around the world, and we focus a little bit too much on what is happening on the other side of the channel.”

Daniel Steck shared his wonderful experience as a judge at this special event. He exclusively told DESIblitz:

“I am French, so for me it is a great privilege to be part of this and Indian and Bangladeshi Restaurants do marvellous food.”

Singer and songwriter Arjun was also there and he spoke of his favourite Curry saying: “I am really boring, it has to be a Chicken Korma.”

We managed to catch up with many celebrities and award winners to get first hand reactions from the event.

Here are the winners for the 2012 British Curry Awards:

A big congratulation goes out to all the winners at this year’s British Curry Awards. DESIblitz looks forward to 2013, when restaurants and those affiliated with food will once again be honoured for their exceptional contribution to the Industry.

Faisal has creative experience in the fusion of media and communication and research which increase awareness of global issues in post-conflict, emerging and democratic societies. His life motto is: "persevere, for success is near..."
There’s Nothing like a Paratha
Desi Influences for Festive Food