The Paratha is one of the most simple and popular forms of cuisine from India and Pakistan. Nothing beats a freshly made Paratha with a knob of butter!

Parathas are a very popular meal in Punjabi households

The paratha or parantha or even prantha is one authentic flat-bread meal originating from North India that has survived its test of time.

Observed as a traditional breakfast, parathas are eaten mostly in the mornings. In the UK, weekends are the chosen time to enjoy parathas.

Historically, the dish goes back to Ancient Vedic times. The word Paratha comes from the Vedic Sanskrit word “Pu-ro-dhaa-sham”(purodhasha). Ingredients like powdered Lentils and chopped vegetables are usually used in Vedic purodhashas.

This dish has travelled to many parts of the world, including USA, Europe, Canada, Singapore and Malaysia. In Trinidad and Tobago, the meal differs from the South Asian version which is generally larger in size and thinner in density.

Chandni Chowk in Old Delhi, India, has a historical significance with the paratha. The “Gali Paranthe Wali” which literally means “the by-lane of parathas” was established in 1870″s in Chandni Chowk. 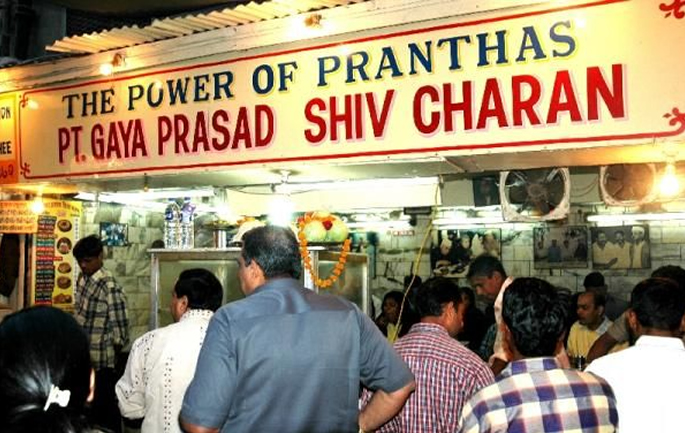 Pandit Gaya Prasad Shiv Charan Paranthewala, an eatery set-up in 1872 in the gali, has it”s cramped seating, soot-covered ceiling and the smoke and smell of ghee, offering a very nostalgic look.

Manish Sharma, the sixth-generation owner of the eatery says:

“We have not changed the look because our customers like it this way. It gives them the feel they have travelled here for.”

Paranthas are still served as they were in the past with the same three varieties of vegetables, pickle and kele ki saunth along with a glass of Lassi.

Parathas are a very popular meal in Punjabi households especially from India and Pakistan and is also a well-known dish within the Bangladeshi community.

The key ingredient of butter, ghee or oil is used when cooking parathas to give them the wonderful taste they have. Butter being the most common choice.

So, eating too many parathas can sure pile on the calories!

Paratha shapes can be round, heptagonal, square or triangular. The round and square parathas are the most loved. 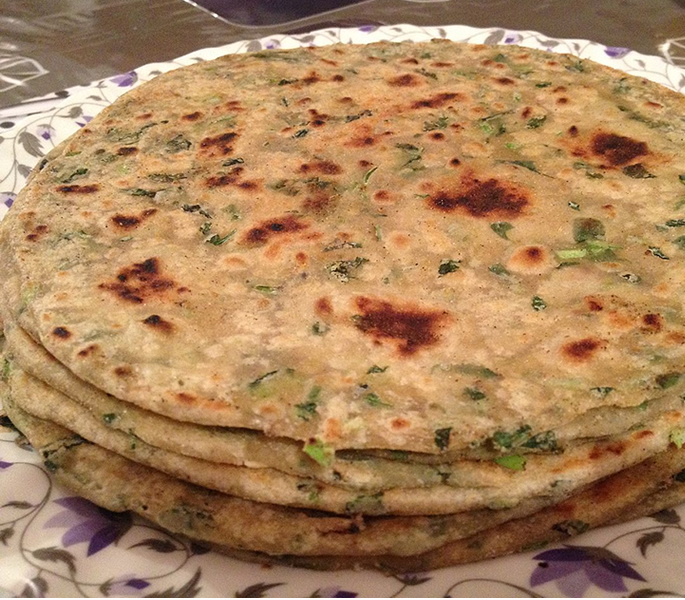 The word itself is a combination of two words – “parat” and “atta” (flour) which refer to layers dough that is cooked.

The dough is commonly made from chappati flour. The dough is then split into dough balls to make parathas. There two common ways the dough balls are then made into a paratha.

One method is where a dough ball is split into two parts which is partially roller-pinned, adding pinches of butter across one layer, seasoning of salt and garam masala, sealing the two layers together and roller pinning again into shape.

The other method is partially roller pinning the dough ball, adding pinches of butter across it, seasoning of salt and garam masala, folding over the sides like a flower into the middle, sealing it all and roller pinning it into shape.

The paratha is then cooked by pan frying it on a traditional “tava” or a frying pan, adding butter or oil on the paratha and turning it over both sides. Often producing lots of scented smoke in the kitchen and beyond!

Here”s an example video on how to make  parathas: 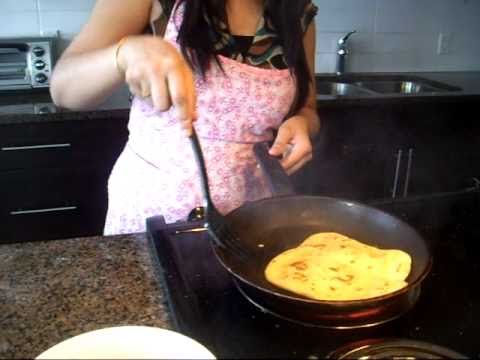 This kind of paratha is traditionally known as the “plain” paratha, however, parathas come in many types.

The sumptuous parathas are especially “stuffed” parathas which contain a filling in addition to the butter inside. Popular fillings include cooked aloo (potatoes), gobi (cauliflower), mooli (white radish) or paneer (cheese). 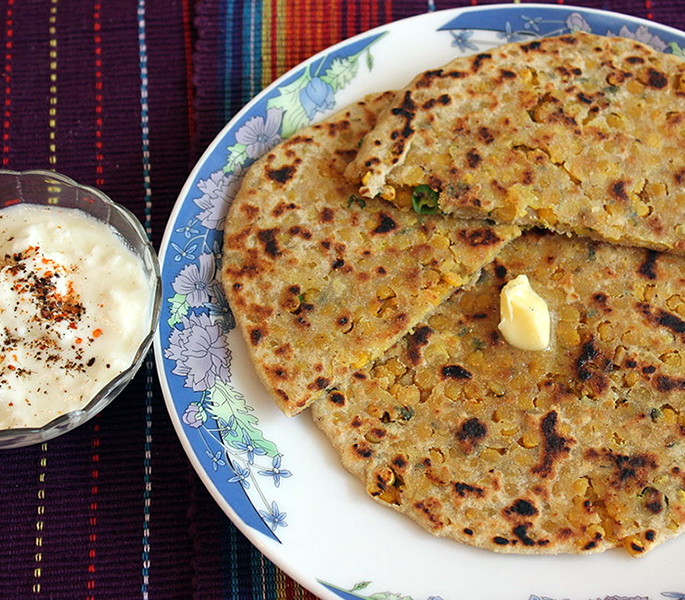 Fillings are often prepared prior to cooking. For example, potatoes a boiled, lightly mashed and seasoned with salt, masala and chilli; mooli (white radish) is shredded as added to the dough and gobi (cauliflower) is boiled and seasoned too like potatoes or even combined with them – for “aloo gobi” wallay parathas.

Stuffed parathas are made cooked in the same way as plain parathas but the filling has to be carefully roller-pinned so it does not fall out of the edges.

Once cooked, parathas are frequently enjoyed with fresh yoghurt, pickle (usually mango) or simply a knob of butter on the top of a fresh hot paratha.

Some households do have them with meat or vegetable curries too, such as keema and cholay. Another recipe is the addition of sugar to the butter when making the paratha layers, a common style of paratha for young children. 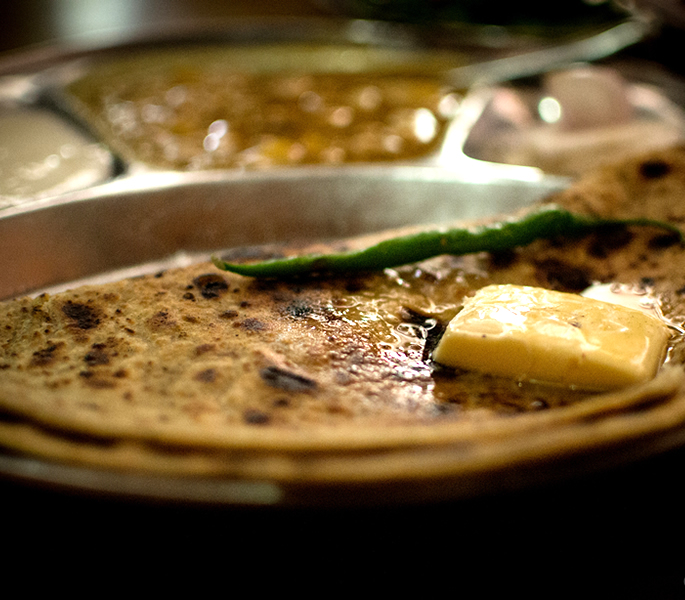 Spiced tea with cardamom and cloves is a well-known accompaniment for parathas and some people even dip their paratha in the tea.

Modern living has introduced another convenience food which constitutes of “frozen” parathas that can be bought from major supermarkets. Known brands include Shana Parathas and Humza Parathas. These parathas are prepared ready to fry from frozen and have increased in popularity especially for those who can”t cook fresh and in particular students!

Nicely cooked parathas and their delightful aroma is so so inviting and can lead to eating more than keeping count!

So, do not leave it too long before you try a paratha. If you never have before, make sure you try different recipes for paratha because now you can even try chocolate paratha!

Madhu is a foodie at heart. Being a vegetarian she loves to discover new and old dishes that are healthy and above all tasty! Her motto is George Bernard Shaw's quote 'There is no love sincerer than the love of food.'