For British Asians, the festive season means gift-giving, decorations and of course festive food! We explore the most popular foods with a Desi influence.

Turkey with no spices can taste bland to many Desi palettes

Nowadays the vast majority of British Asian households do cook traditional spread to celebrate the festive season. However,  many include Desi influences on the festive food.

Many South Asians see Christmas as being something of a ‘Second Diwali.’ Many of the customs that South Asians engage in, closely follow the traditions that are common-place during times of spiritual significance.

There are many Christians in India and Pakistan and they celebrate it religiously as well as indulging in cuisine which is not perhaps as traditional as in the West.

In India, tradition demands that neighbours exchange platters of sweets and snacks with each other on Christmas day, These include Gujia or Nuereos with Coconut Filling, Kulkuls, Nankaties or Naan Khatais, Coconut Barfi, Guava Cheese, Bebinca (layered Goan pudding), Chakli (savoury spirals) and Cheeslings.

In the UK, the Christmas holiday period is a very food-heavy festival with supermarkets competing on price; marketing their food as special and different. Many are using Indian food themes are part of their campaigns.

Many advertisements of festive food on the television and on the back of buses show a mouth-watering feast of starter platters, presenting Desi influences like Indian Samosas, Pakoras, Chicken Tikka and Lamb Kebabs, Onion Bhajis, Saag Aloo Tikkis and Spring Rolls as part of the festive delights. 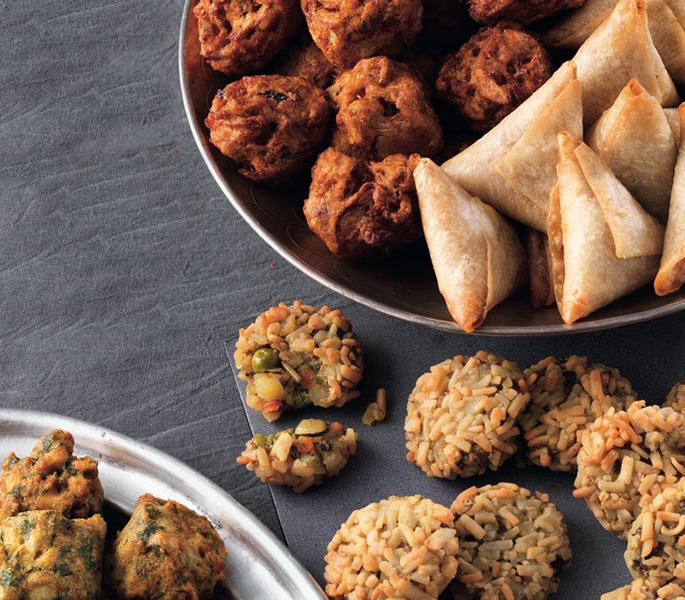 The main items of the traditional Christmas spread are just as varied as the party food that many graze on throughout the winter holidays. The wide range of savouries and desserts tickle just about anyone’s taste buds.

The amount of effort that individuals put into Christmas celebrations is nothing short of astounding, especially amongst the Desi community, where competition tends to have a part to play in the proceedings.

Festive celebrations within British Asian families have evolved as generations celebrate the holiday period more and more as part of a tradition of their life in Britain. Festive food and socialising naturally play an important role.

In the past it was usually about going to each other’s houses, giving basic gifts such as clothes and chocolate selection boxes and eating Desi traditional foods. Today, things have changed which seem to reflect the wealth and prosperity created by British Asians.

“In my family, we all have huge get togethers and we take it in turns each year to have the Christmas meal at each other’s houses,” says Rupal. “Every year, there is more food, more dishes, more, more, more and everyone always tries to out-do each other.”

Gunna, from Bradford, starts her food shopping quite early so that she is well prepared for the Christmas meal and says:

“I like to make sure that there is something for everyone. People who want meat, people who want plenty of veg, people who still want a traditional ‘Aloo Gobi’ …I started planning the dishes I’ll be making as soon as the calender reached December!”

If there is one dish, which always takes centre stage at nearly every Christmas table, it is roast turkey.

Historically, King Henry VIII was the first English monarch to enjoy turkey, whilst during the times of King Edward VII. In the classic novel, ‘A Christmas Carol’ [1843], author Charles Dickens highlights the essence of turkey, as a backdrop to this period. 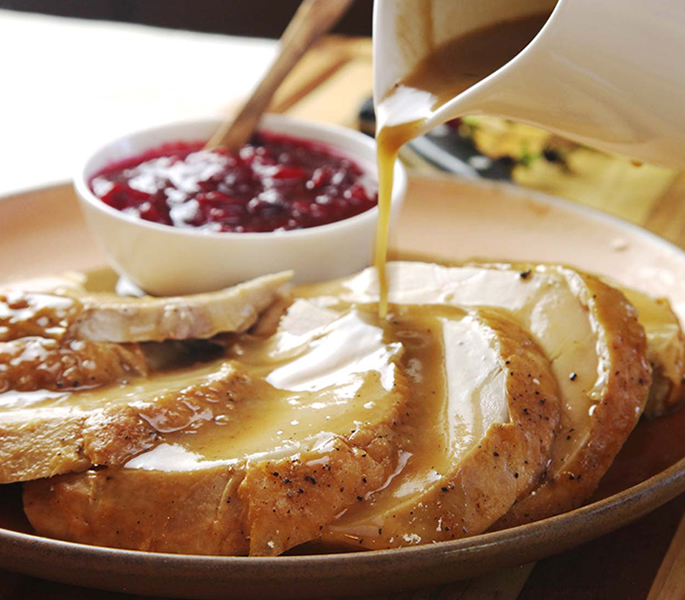 It was not until the 1950’s, before most British people started eating turkey at Christmas. Prior to this it was seen as a luxurious commodity, exclusive to the rich in Britain.

However, many British Asians, do not rate the traditionally cooked Christmas turkey roast with major excitement.

“I really don’t like the food everyone serves up at Christmas. Give me tandoori chicken anyday!” said Sandeep, from Reading. “What’s wrong with chicken? It’s flavoursome, and it’s not dry or bland like turkey.”

Turkey with no spices can taste bland to many Desi palettes which are used to eating more spicy food. Therefore, more and more families and individuals experiment with adding some spice to the turkey or other meats they cook for the festive period.

These include adding spicy marinade to turkey before roasting, using leftover traditionally turkey to create a spicy dish which should go down well in an Asian household. In addition, there are recipes for making spicy turkey tikka from turkey breast and spicy meat koftas and kebabs made from turkey mince. 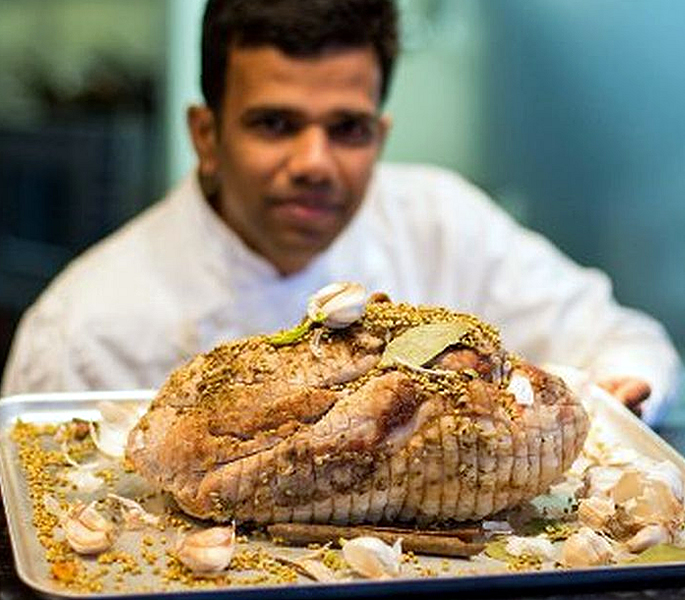 Ramesh Kanakraja, who works at Rix’s Bombay Cafe and Bar in Coventry, came up with the idea for an Indian-style Christmas turkey using a recipe borrowed from his mum back in Madras.

Ramesh said: “I wanted to put together a Christmas dish that combined the street food of my home country with the old traditions of a British Christmas dinner. The turkey is served with brandy-infused cranberry chutney, and comes as part of a meal which diners share when they come to enjoy Christmas at Rix’s,” he told the Coventry Telegraph.

Experienced celebrity chef Atul Kocchar uses a variety of spices to present turkey in more than one way. In the video below, the renowned chef takes us through two Asian inspired recipes using turkey left over’s to prepare the perfect festive food feast, ideal for Boxing Day and the rest of the holidays. 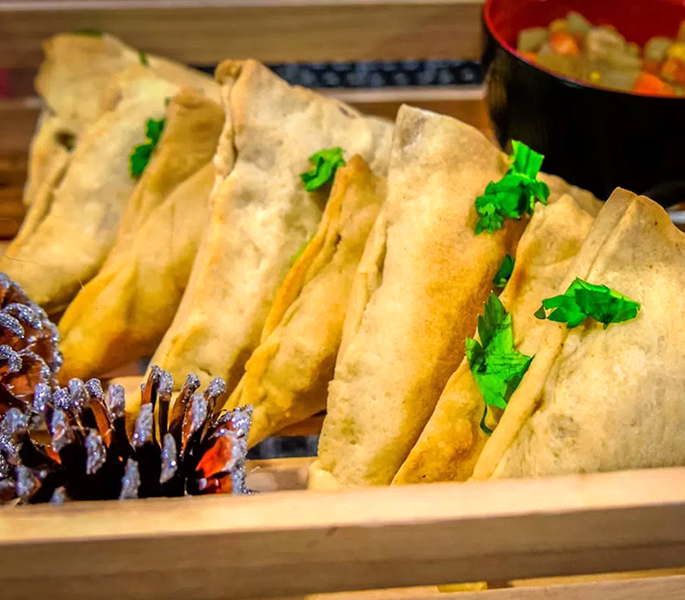 Samosas are usually made with vegetable, chicken and lamb fillings.

However, Turkey is also incredibly easy to lend to Desi style samosas which are very tasty and festive!

Here is a recipe for turkey samosas to give the festive season a taste of the both East and Western traditions.

Simply enjoy these with your favourite dips and chutneys. This is a great recipe to make during the holidays for guests you may want to surprise.

It’s always a great idea to experiment too and come up with your own festive recipe and share it with those stuck for ideas for festive food during the holiday season. Go on be daring and get into the spirit!

Simi has a thirst for anything to do with classical music, arts and literature. She can't function without playing the piano at least once a day. Her favourite quote is "Enthusiasm is excitement, with inspiration, motivation and a pinch of creativity."
2012 British Curry Awards
Healthier Online Indian Takeaways