A new type of all-electric vehicle has been designed with kids in mind, courtesy of the UK-based driving instruction agency, Young Driver.

"This is not a toy. It is very definitely a small car!"

Your child could be driving at the age of five thanks to UK based driving instruction agency, Young Driver.

The driving school for under-17’s is set to launch the new car at their selected UK venues, allowing children under 10 a chance to drive at a much younger age in a safe, controlled environment.

The new vehicle isn’t just some remote controlled pastime either, as Kim Stanton, Young Driver’s director, is keen to stress:

“This is not a toy. It is very definitely a small car! We’ve had children involved throughout its development, working with the designers and engineers to ensure that it provides a realistic driving experience.”

The vehicle, which was showcased at this year’s Gadget Show, has been designed by industry veteran Chris Johnson.

Johnson has worked on interior and exterior designs in the industry for the past 30 years, and his work can be seen in vehicles by Volvo, Chevrolet. He also helped design a special hyperbaric diving chamber for naval manufacturers Divex.

The two-seater car is powered by twin electric motors, and uses a special technology that detects obstacles and shuts the car down to avoid collisions.

Reaching a maximum speed of 10mph, the car is designed to slowly introduce young children to driving without exposing them to the risks of driving a real car.

Having been in development for the last nine months, the new vehicle by Young Driver will launch in May 2016, and the company hopes that being able to cater to younger drivers will get children engaged with responsible, safe motoring.

By engaging with an all-electric vehicle, Young Driver also hope to encourage an interest in eco-friendly motoring. 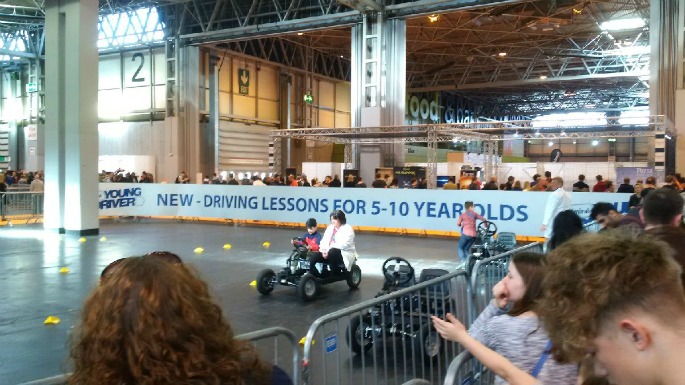 Young Driver’s modus operandi is simple: by introducing people to driving at a younger age, instructors give them a chance to get a real feel for driving before they reach licence age, and they will be safer drivers as a result.

Offering one to one ADI certified instruction at over 40 venues, the course is currently available to anyone over the age of 10 and over 1.41 meters tall. To find more information, check out the Young Driver website.