A drug driver from Bolton posed with luxury cars just days after running over and killing a father-of-four as he tried to cross the road.

Ali claimed that "everyone does it".

Rizwan Ali, aged 26, of Heaton, Bolton, was jailed for 41 months after he ran over and killed a father-of-four. Just days later, the drug driver posed with high-performance cars.

Bolton Crown Court heard that Ali had been driving at almost 60mph when he hit 65-year-old care home worker Colin Olawumi on a pedestrian crossing on Topp Way, Bolton, on August 18, 2018.

Ali used his brother’s driving licence to fraudulently hire a Range Rover Sport which he drove to a wedding where he took both cocaine and cannabis.

Despite his guilty pleas, Judge Graeme Smith criticised Ali for his initial efforts to fight the case and his attempts to shift the blame onto Mr Olawumi, traumatising the victim’s family for 18 months.

Ali denied that he had been speeding. The court heard how he waited until the day the jury was to be sworn in for a trial on March 2, 2020, before entering guilty pleas.

When asked to answer for his speeding, Ali claimed that “everyone does it”.

In their victim impact statements, Mr Olawumi’s family described how they discovered various pictures of the drug driver posing with high-performance cars.

They said that he continued to post pictures as proceedings continued, with one picture of Ali sitting on the bonnet of a blue Volkswagen Golf R34, posting just eight days after Mr Olawumi’s death.

Another image showed him with a Lamborghini Aventador and was captioned “flyinggggg!” followed by a racing car emoji. 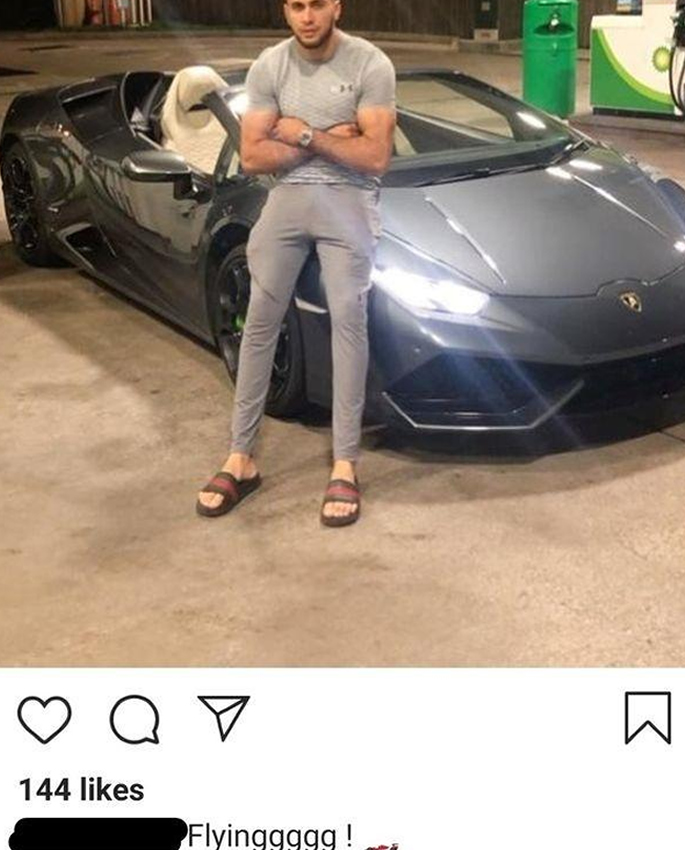 During his sentencing, Judge Smith criticised Ali for the pictures. He said:

“I have seen the photographs and videos posted to your Facebook and Instagram accounts since the accident, which show you in or next to various high-performance cars.

“I can understand why Mr Olawumi’s family have been caused additional distress by this.”

“And why they feel that the remorse you are now expressing is not sincere.

“You clearly continue to have an interest in high-performance cars, and it was undoubtedly unwise in the circumstances to post these photographs and videos to public accounts.”

The pictures have now been released by the Crown Prosecution Service.

Ali was sentenced to 41 months in prison. He also received a driving ban of four years and eight months.

Dhiren is a journalism graduate with a passion for gaming, watching films and sports. He also enjoys cooking from time to time. His motto is to “Live life one day at a time.”
Man jailed for Arson Attack on Leicester Shopping Centre
Indian Wife accused of Killing Husband while Out on Bail