Why do British Asians celebrate Christmas?

Christmas is a time of celebration. British Asians tell us how they celebrate their Christmas and why it is important to them.

Christmas, as the singer Andy Williams once said, is “the most wonderful time of the year”.

So much, that it is the perfect time for many British Asians to spend time with their loved ones.

On the other hand, it is also a good a reason as any to indulge in the tempting and mouth-watering food and drink on offer.

The mad frenzy that Christmas unknowingly brings affects everyone. Whatever you feel about it, there is no escape.

In the UK, British Asians all over the country feast on traditional turkey dinners and bring magic into their homes with Christmas trees and decorations.

But what is about Christmas that gets everyone so excited? Here, British Asians tell DESIblitz why and how they celebrate it. 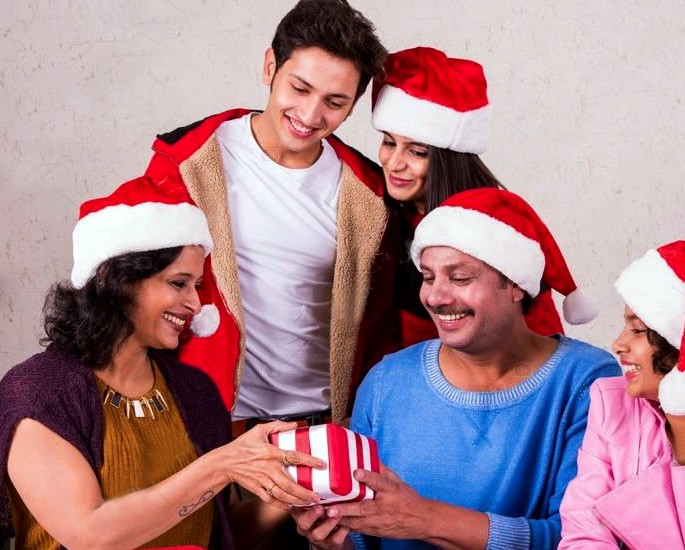 Love them or hate them, Christmas, for a lot of British Asians, is that special time of year for embracing all family members.

“It definitely brings friends and families together and it’s something to look forward to at the end of the year.”

“Yes, it’s a special time of the year, a time to celebrate during the dark winter months.

“Of course, the presents and food make it all the more enjoyable”.

Aron Vilkhou from Tamworth gives his reason as to why British Asians celebrate Christmas:

“Christmas is celebrated universally. It is not just a Western holiday. There are a lot of different traditions around the world for that particular time of year.”

“It just brings people together. And of course, there’s the dinner and presents too”.

Farhana Rokad, from London, admits that her family does not have a traditional Christmas with a tree, decorations or presents.

For her family, Christmas is more about giving thanks and showing appreciation for what they have.

“It’s a time for family and remembering others less fortunate.”

“As a family, we enjoy the visit to Central London or Winter Wonderland to appreciate the lights and fun activities.”

Sukhi Kaur from Birmingham admitted that Christmas for her family was a cultural thing rather than a religious thing.

“We embrace parts of it but we do tell the kids the nativity story as it helps their understanding of other faiths.”

She explained that they were happy to acknowledge it and let family buy gifts for the children. However, they made sure the focus was on the right things.

“For example, this year my eldest is seeing a lot of homeless people so sharing, giving and helping others is going to be this year’s focus.”

Mostly for the Children 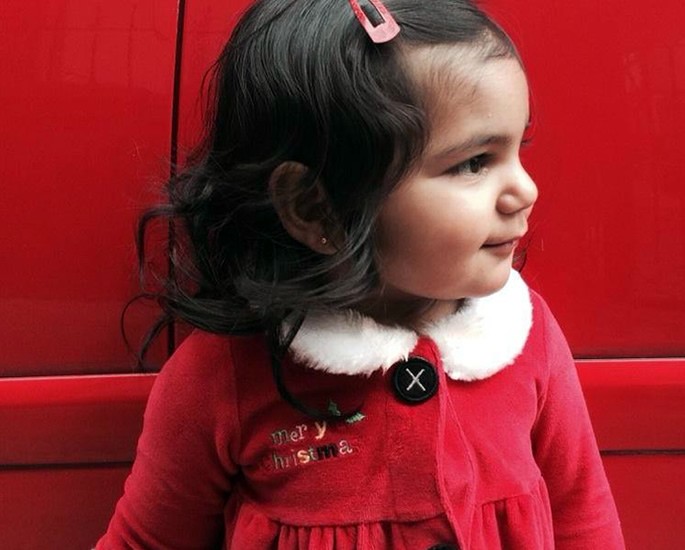 Christmas is very popular with children. They don’t know any different, and being born and bred in the UK it’s become a part of their yearly celebration.

Celebrations for British Asian children have through the decades also become more extravagant.

Compared to the past, where a ‘selection box’, a simple present like a doll or a ball, and buying the Radio Times or TV Times was acknowledged as a big treat.

Some young British Asian parents go all out at Christmas to make it a memorable time for their little ones.

Jess Sunshine from Ilford Essex says: “I now have a baby and I want to do all the things we had when we were children”.

Jess is adamant that her little girl will not miss out. She has been busy adding all the special little touches to their home.

“I’ve made her a Christmas stocking, an advent calendar, a Christmas box and even a treat plate for Santa and his reindeer.”

So what better reason could anyone have to deck the halls and bring the magic of Christmas into their homes?

Kiran sees that being part of British society is as important for children now, saying:

“Our kids and grandkids are born here so we don’t want them to feel left out. We do it mostly for them.”

Pindra admits that Christmas didn’t have the same importance for her family when she was growing up, saying:

“My childhood memories are of no Christmas. All the other kids at school talked about what they got as presents”.

“I clearly remember making up a list of imaginary presents. It made me very sad.”

Kiran reminisces the lies she told at school after Christmas, saying:

“Going back to school after the holidays was hard. I would lie about getting presents just to fit in with the other kids”.

This vein of thought appeared to be common throughout. All parents wanted their children to fit in and not feel isolated.

Bally Wadalia from Leamington, on the other hand, explained how they tried to phase Christmas out as the children got older.

“I was so surprised at how quickly my children could recite the Christmas nativity story.”

She added: “I felt that, as a Punjabi parent, I hadn’t done enough and started researching about our culture and festivals”.

Bally is happy that doing this has helped her children, saying:

“It’s made them stronger in character, knowing who they are and that human kindness is key”.

Listening to her it was clear that her children did not miss out on Christmas. Instead, their lives were richer because of their understanding of both cultures.

The Culture of ‘Fitting In’ 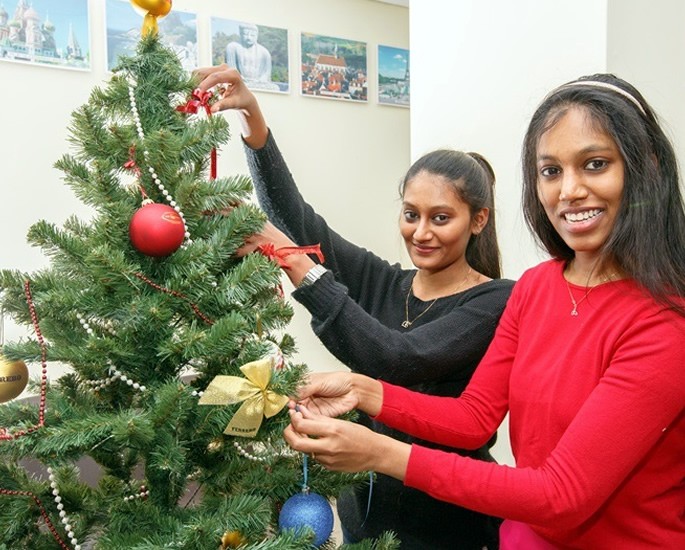 There was a lot of emphasis on ‘fitting in’. As Kiran said: “If you can’t beat them, join them!”

Christmas is, of course, a holy festival but the way that this is interpreted is individual to everyone.

For some, it is about the holidays, food and drink and social gatherings. For others, it may be a time just to reflect back on the year and use it as a time to just relax and enjoy time off.

Many of the families we spoke to want their children to understand it is a time for being thankful.

They stressed the importance of teaching them to help others less fortunate than themselves.

The significance attached to ‘fitting in’ was a common thread. Children need to have a sense of belonging.

The comments by Pindra and Kiran about making up a list of presents so that they didn’t feel different are tinged with sadness.

With all the other pressures that children have to deal with in today’s society, feeling different does not need to be one of them.

Christmas can be whatever you want it to be. Most British Asians will say that they don’t celebrate it for the religious aspects.

“It’s just because the whole country is celebrating and we all want to be a part of it. And why not?”

Davinder explains how her parents were happy to let them believe in Santa. They also reinforced the importance of Christmas for Westerners.

“This was so good because we were inclusive and enjoyed the excitement of Santa at school with our friends so we didn’t feel left out.

“What I’m trying to say is, embrace it all as it’s so important for your child to connect with the outside world”.

However, on the other hand, Sukhi Kaur and her husband Darminder Singh acknowledge their indifference to the whole Christmas thing.

Sukhi tells us that their children were oblivious to Christmas until they started school. Now, she admits, they do the bits they want rather than all of it.

Again, this links back to how the whole country is immersed in everything that is Christmas and children being a part of it.

It becomes an almost impossible task to completely abstain from taking part. 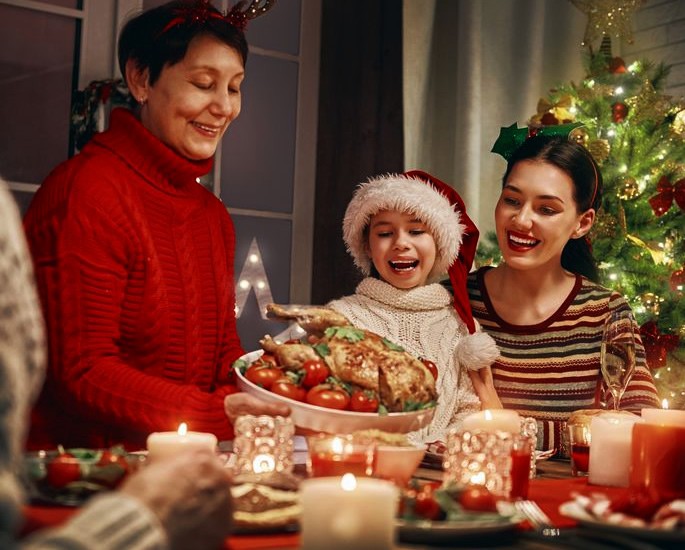 The fusion of East and West is a joy to behold. Tables are laid out with the traditional Christmas feast of turkey and its sumptuous accompaniments, which often are of a Desi nature.

Talking of the food on the day, Davinder says:

“We were able to embrace all the bits we wanted – spending time with families and friends and time off work.

“It also gave my mum the opportunity to make her endless supply of samosas!”

Food is high on the Christmas agenda for almost everyone we spoke to.

“I have to admit, we do add spices to our turkey and vegetables. It just gives them that extra kick”, says Aliyah from London.

“Oh my goodness, the food is amazing,” declares Inderjit Kaur from Huddersfield.

“Nothing beats getting together at Mum and Dads and tucking into a proper Christmas dinner with all the trimmings”, she adds.

The Christmas dinner, she then tells us, is followed by a delicious array of Indian food.

“Just to finish off the evening! We have samosas, spring rolls, kebabs, hot and spicy curries and plenty of drink.”

“Mum just can’t help it. And to be honest, it wouldn’t be the same without it.”

British Asians, it appears, do a pretty good job of embracing this magical time of year. Each family has their own take on what it means to them.

Young British Asian parents, who themselves are born in the UK, are more comfortable with the whole concept of Christmas.

For them, it is ingrained into their upbringing. So it is a natural process to pass it onto their own children.

Christmas, as recognised by all,  is an integral part of the culture we live in. Children need to belong.

Learning about the religious aspect of Christmas does not take them away from their own culture. It adds to it.

So however you celebrate your Christmas, make it a joyful one.

Indira is a secondary school teacher who loves reading and writing. Her passion is travelling to exotic and exciting destinations to explore the diverse cultures and experience amazing sights. Her motto is ‘Live and let live’.
Omar Sharif jailed for Raping Vulnerable Women after Drugging Them
Ruksana Ashraf Jailed for Fraudulent Grenfell Insurance Claims