Dream cricketer, Wasim Akram is to marry his Australian girlfriend, Shaniera Thompson. It is four years after his beloved wife Huma tragically died in 2009.

“I feel lucky that I have got a second chance in life.”

Cricket star Wasim Akram who played for Pakistan has finally popped the question to his Australian girlfriend, Shaniera Thompson. The couple first met each other whilst Akram was in Melbourne, Australia, back in 2011.

There, the two hit it off and their growing friendship quickly turned into something much more for both of them.

Back when they were first friends, their friendship helped Akram deal with the loss of his first wife, Huma. A loving mother and companion, Huma sadly passed away in October 2009 due to multiple organ failure.

After her passing however, it wasn’t long until Akram found happiness once again in the form of Shaniera. 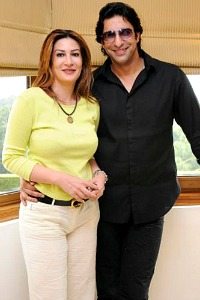 He confirmed the marriage reports saying: “Yes, I will marry next year and I’ve known Shaniera for the last one-and-a-half years and she has converted to Islam.”

“I never thought I would get married again, but I am lucky and very happy to find love again,” Akram also admitted.

Something everyone wants to know is how the Sultan of Swing asked the life-changing question. So how did he propose to the 30 year old Aussie beauty?

Bride-to-be, Shaniera explains: “He was really sweet about it. He asked me what my dream proposal would be and I said I’m not the type of woman that likes a big scene. I would want it to be at home or somewhere private. Then I came into the lounge room and he was on his knee and asked me if I’d marry him.”

“It was the [most] romantic moment of my life because it was so genuine,” Shaniera added. We can definitely tell these two love birds are completely devoted to each other especially as now Thompson will call Pakistan her home.

The story doesn’t end there though. In true traditional style, Shaniera got the 47-year old to speak to her father to seek his blessings. The former cricketer now sports commentator happily obliged. Wasim was blessed almost immediately and we can now look forward to the wedding of this cute couple.

Despite his long and steady relationship with Shaniera, the media has regularly pushed Wasim back into the limelight. Rumours had previously surfaced about the former fast bowler being in a relationship with the beautiful Bollywood star Sushmita Sen. 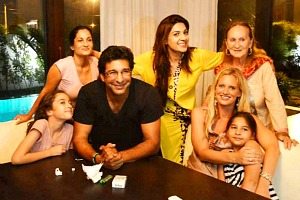 Both of them have acknowledged each other as being good friends and only friends. He was rumoured to be getting married to her, but Sushmita took to twitter to clear up the matter, tweeting:

“Wasim Akram is a friend and will always be one!! He has a wonderful lady in his life.. rumors like these are uncalled for n disrespectful!”

Akram had also been linked to Pakistani model and actress Humaima Malick in the past, after it was alleged that the two had a very close relationship. Akram again refuted these claims.

Upon hearing the news that Wasim Akram is all set to marry his Aussie girlfriend, Malick said:

“I’m so happy for Wasim. He has finally got someone in his life and is planning to settle down. I haven’t met the girl, but have heard from common friends that she is pretty. I have no idea about the wedding dates till now. I wish both of them good luck and happiness.”

Akram is, without a doubt, delighted to start a new chapter in his life: “I feel lucky that I have got a second chance in life.”

He also went onto say:

“It will be a new life, a new beginning and I hope that we will settle down well with the best wishes of family and fans.” 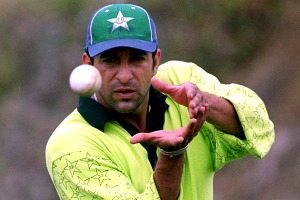 We’re sure both his family and his fans are glad to see he has found someone that loves him and his two sons: “She is close to my kids who are also excited,” Wasim insisted.

Not only does he have approval from his kids but also from his in-laws (Huma’s parents): “My in-laws also endorsed the decision after meeting her,” Wasim said.

Wasim is one of Pakistan’s most-loved former cricketers and the greatest left-arm fast bowler ever witnessed in the history of the game. The 47 year old has had an impressive career having played 104 Test matches and 356 One Day Internationals before retiring in 2003. He recently spoke out about the fate of the current Pakistan cricket team who has struggled to win matches since the beginning of 2013:

“The bowling is phenomenal. Mohammad Irfan, the 7-foot paceman, is a real star. But they are really struggling with their batting. They do need to play more Test cricket though and in Pakistan,” Akram insisted.

With wedding bells on the horizon however, it seems that Wasim has everything to look forward to in his new marriage to Shaniera. We at DESIblitz would like to wish the couple a lifetime of happiness.

Farjana is a young aspiring journalist. She enjoys writing, reading and listening to all types of music. Her motto in life is: “Go confidently in the direction of your dreams – live the life you have imagined!”
India beat Sri Lanka in Tri-Series Final
Billionaire Shahid Khan buys Fulham Football Club