The original word ‘Bhangra’ describes the dance from from the Punjab in Northern India. Today, whilst it is also used to identify music with roots from the same region, the dance from is still performed on stages and festivals world wide. We look at Toronto’s first official Bhangra competition which celebrates this dance form with competing teams.

The dancers were filled with vibrant energy

On Saturday August 6th 2011, Toronto’s annual Bhangra competiton took place at the Sandra Faire and Ivan Fecan Theatre, located at York University. The event, created by NTP Entertainment organised Toronto’s first official Bhangra competition. From all over North America, seven teams had gathered on August 6th to compete on stage for a grand prize of $2000.

The curtains opened promptly at 6.30pm, and the audience was introduced to a lovely dhol. After their performance, the host of the night was introduced. The host happened to be Toronto’s very own popular you tuber Superwoman. 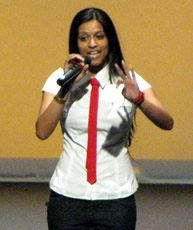 For those of you who haven’t heard of who Superwoman is, then don’t fret. Superwoman is one of many things, she is a popular you tuber, comedian, dancer and also, an event organiser! When she isn’t entertaining her viewers on you tube, she’s out and about doing various things. For instance, did you know that Superwoman and her Bhangra group (NTP) were the organisers of T Dot Bhangra? With that being said, with all her talents Superwoman is definitely on the rise to becoming a well known individual.

The first performance of the night, was made by Toronto’s own Anakhilay Gabru. Their dance moves were flawless, and to top it off they had one member of the team play dhol on the side of the stage. The music incorporated was definitely chosen from a variety of options. The performance had everything, from classical Punjabi folk music, to a bit more modern Punjabi music, to even Bollywood music and during the last few seconds of their performance, the crew decided to dance along to one of Hollywood’s popular songs “Jump on It.” 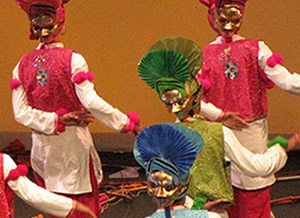 Next on the block was another crew from Toronto, named Nachadi Jawani. Nachadi Jawani kicked off their performance by doing various dance moves that were incorporated with the Saap and Khunda. The dancers were filled with vibrant energy, they switched up their music and added a bit of hip hop, and not to mention they had various co-ordinations throughout their performance. One key thing that stood out the most was how towards the end of their performance the team put on masks at the back of their heads, which symbolised the identity of two characters.

Furteelay Shokeen, the only male Bhangra team from Detroit, was next. The team came on stage full of energy with an amazing performance that was filled with classical old Punjabi songs. They hit the wow factor when they showcased their unique moves to their performance. For instance, using the song we all grew up hearing called “Apna Punjab” by Gurdas Mann, they painted a picture of having two groups of three boys on each side of the stage get on their knees and bend over to form a little bench, on top of them laid down one individual from the team. 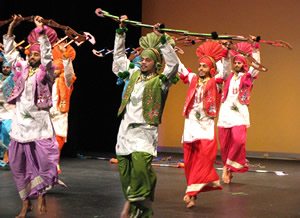 Next on the list, was New Yorks very own Virsa Folkstars. One blurb to describe their performance would be “A Symphony of Punjab.” Their form of dancing was phenomenal. It was rather different compared to the other teams, by that I mean they were more mellow and relaxed but at the same time they were pumped with energy and a whole lot of smiles. By the end of their performance, it was as if the songs they used were telling a story to the audience and guiding them through it.

All the way from Washington D.C, we welcomed on stage DC Metro Punjabi Arts Academy. This team was the only team who used pure live Bhangra. In other words, they used no pre-recorded instrument or music. Their performance was magnificent. With one live singer, and one member of the team playing dhol on the side the team danced along to the live music provided to them and put on a stupendous show. They were beyond energetic, they showed emotions throughout the entire performance. 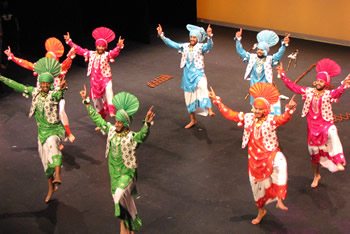 Next on board was Pittsburgh’s very own First Class Bhangra. The performance had everything, from upbeat music, to energetic dancers who incorporated various coordinations into their performance. One surprise of the night was finding out that one member of the team couldn’t get passed the border, so the team decided to call up a friend and ask him if he could dance along with them. The friend agreed and learned the entire routine in one day! When watching the performance, no one could even tell that there was a new dancer on the team because the entire group was flawless.

Nachade Yar Punjab De was the largest group of sixteen people. We can’t say much about their dancing, because it was immaculate. Throughout the performance, the group synchronised to a remixed western song. One thing that was recognized about their dance moves was that they were always in pairs or groups, and in the centre of the stage stood a group of four. The best part would be how in the middle of their performance, they pulled out armor and canes which made them look like warriors, which symbolised courage.

Before we got to introducing the judges and handing out the awards, the organisers provided us with one more performance, but this time it was a vocalist who was performing. Preet Mani, a Punjabi vocalist and song writer from Brampton took to the stage singing a few of his hit singles. The young singer was accompanied by four female back up dancers in his performance. 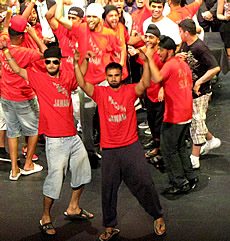 There were three judges of the night, Pashi Singh Malik, Sandy Grewal and Pushpinder Sidhu. With that being said, let’s move onto who won the awards of the night. The best dressed award went to no other then Toronto’s Nachde Yaar Punjab De. The third place trophy and a reward of $800 went to Washington’s DC Metro Punjabi Arts Academy. The second place trophy along with $1200 went to yet again, Toronto’s own Nachde Yaar Punjab De. And the team who took the grand prize of $2000 home as well as a huge first place trophy was Nachadi Jawani!

Overall, the atmosphere of the night was phenomenal. With superwoman’s excellent hosting skills, to the magnificent dholi’s and dancers performances, T Dot Bhangra was one event you definitely do not want to miss. We look forward to attending this event next year, and seeing what talented teams will step up to the stage and perform.

Re-live some of the moments of this fantastic evening of Bhangra dances by checking out our exclusive photos from the event: