Two-year-old Fatehveer Singh became trapped in a borewell in Sangrur, Punjab, India, after falling down it. A rescue operation is underway.

"we should be able to retrieve the child"

A large-scale rescue operation has continued to in order to free toddler Fatehveer Singh after he fell into a borewell in Punjab’s Sangrur district.

The two-year-old boy was playing near his house on June 6, 2019, when he fell down the unused borewell.

The 150-foot deep borewell was covered with a cloth and the boy accidentally stepped on it. His mother attempted to rescue him but was unsuccessful.

Fatehveer got stuck at around 125-feet deep in the seven-inch wide hole.

A team from the National Disaster Response Force (NDRF), the army, civil authorities, villagers and volunteers helped to carry out the rescue operation.

Officials said a parallel borewell was being dug by installing reinforced cement concrete pipes which were 36 inches in diameter in order to get the child out.

So far, they had managed to dig a parallel borewell which was approximately 105-feet deep. Rescuers manually dug up the soil.

The young boy was unconscious after he fell and his family, as well as locals, hoped for his safety. Fatehveer showed signs of movement 40 hours after being trapped in the borewell.

He has been stuck in the borewell for more than 55 hours. 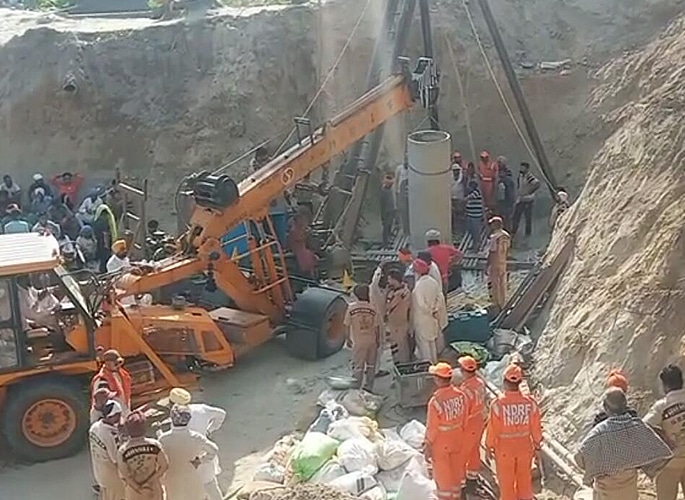 “We have reached around 105-feet deep as of now and another about 20 feet still remains to be dug up. We are expecting if all goes as per schedule, we should be able to retrieve the child by 5 am.”

Thori explained that a team of doctors were on standby at the site to provide medical assistance as soon as Fatehveer Singh is rescued.

An ambulance equipped with a ventilator has also been stationed at the site.

Earlier, the NDRF made an attempt to rescue the child by using a rope but they were not successful.

Oxygen has been regularly supplied to Fatehveer and the authorities are using a camera to monitor his condition.

Twenty-six people from the NDRF have been trying to rescue the boy throughout the day and night operation.

While the authorities are expecting to get Fatehveer out of the borewell by the morning of June 9, 2019, so far, that has not happened yet.

This incident has brought to light the dangers of uncovered borewells, which had become death hazards for young children.

In March 2019, an 18-month-old boy was rescued from a borewell in Hisar, Haryana. He was rescued two days after he had fallen into it.

Dhiren is a journalism graduate with a passion for gaming, watching films and sports. He also enjoys cooking from time to time. His motto is to “Live life one day at a time.”
British Asians recognised on Queen’s Birthday Honours List 2019
Two Men jailed for Fraud after posing as Police Officers