The Rise of Asian Women in British Politics

With 40 Prospective Parliamentary Candidates in the 2015 General Election, Asian women have secured a clear foothold in British politics. We track their increasing political ambitions over the decades.

"I am very lucky, my family has no problem in supporting my political activities."

The history of Asians in UK politics is limited: Dadabhai Naoroji was the first Indian to be elected into Parliament in Britain in 1892.

Nearly 100 years later, Keith Vaz became the second elected Asian MP. Since then Asian men have grasped a relatively strong foothold in parliament. But what about Asian women?

For 2015, there are 131 South Asian’s standing for election, representing the five largest parties in the UK (the Conservatives, Labour, Liberal Democrats, UKIP and the Green Party).

Of these, 40 candidates are South Asian women. In 2010, a record of 22 Asian women stood in the previous election for all three main parties.

Sayeeda Warsi was the first Pakistani woman to sit on the front bench for the Conservatives in 2007, but as a baroness rather than as an MP. Until now, no Asian woman had ever been elected as an MP.

The question remains: Why has it taken so long for Asian females to enter into British politics? 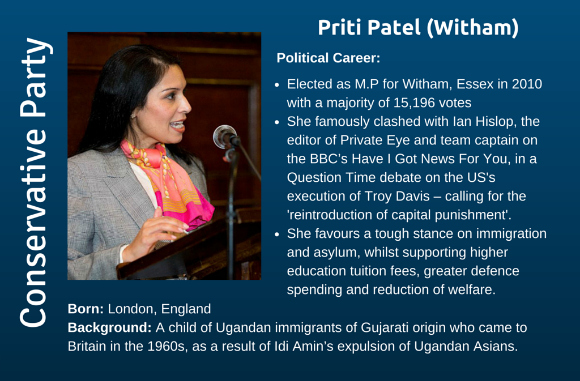 It has taken time for home-grown British-educated women to participate in politics. As Victoria Honeyman, lecturer in British Politics at Leeds University, explains:

Whether Indian, Pakistani or Bangladeshi, these identities are stereotypically one of passivity and such women are perceived as inactive citizens, consequential of an oppressive culture. As Shabana Mahmood (Labour MP for Birmingham Ladywood) states:

“The image of the voiceless woman who cannot leave the house is just not true: they are interested in politics. Parliament is for the people – all of the people – and the ethnic minority population should claim it.” 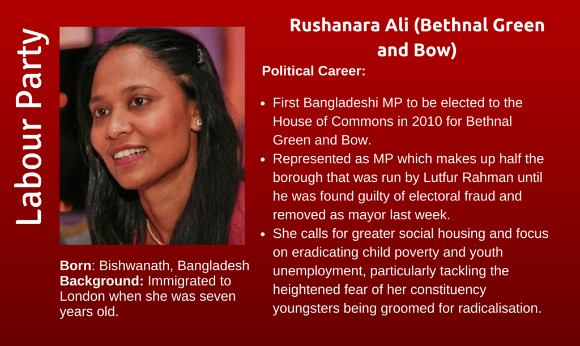 But these broadly believed impressions are inconsistent with reality and South Asian women in politics are continually challenging them.

Women are no longer victims of patriarchy but rather fully invested and integrated within ‘British’ culture and even more importantly, they are critical of this culture they have adopted.

Yasmin Qureshi (Labour MP for Bolton South East) believes women have to take part in politics in order to play a useful part in society:

“I am not an exception. Yes, it takes a lot of hard work. I have been active in the Labour Party since I was 16. I am very lucky, my family has no problem in supporting my political activities.”

Yasmin adds that British Asian women should come out of their homes to take part in social and political activities. Once they set targets, they can achieve a lot.

And support for women is out there. Shabana Mahmood says: “When I was first selected a lot of people said to me that Asian men or Muslim men won’t talk to you or engage with you but I found for a lot of people it’s a breath of fresh air.”

Rushanara Ali, who sought selection in 2007, adds that the community got right behind her, with elderly Muslim men being particularly supportive:

“They are used to having women leaders in the subcontinent – there have been female prime ministers in Bangladesh, Pakistan and India.” 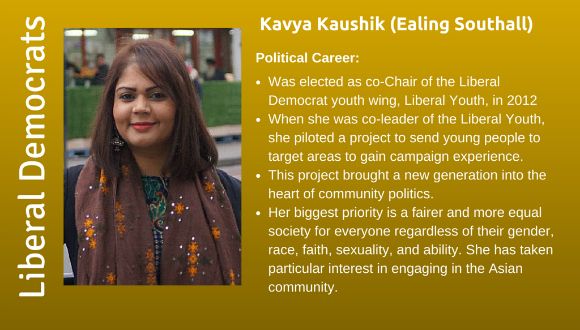 Priti Patel also cites that David Cameron has also played a key role in opening up the Conservative Party to Asians and other ethnic minorities:

“To his credit, the Prime Minister has expressed a lot of enthusiasm over increased inclusiveness and diversity within the party, and has emphasised that he is not interested in mere window-dressing,” she notes.

Indeed, the prospective parliamentary candidates listed below are a group of vibrant women who clearly have political agency.

Here is the full list of Prospective Parliamentary Candidates in the 2015 UK General Election:

In an industry historically dominated by white, upper-class men; it is a tribute to these women who are fighting with conviction to improve their lives and the lives of others – certainly not an easy task.

As the general election draws near, the pressure is on for all parties to re-engage the apathetic British voter.

With such great support of these influential women, one can only hope to see a greater commitment to the liberalisation and freedom of not only oppressed British South Asian women, but women as a whole.

And another aspiration that derives from this phenomenon? Perhaps we can expect to see a female ethnic minority as Prime Minister of Britain in our lifetime.

Natasha is an English Literature and History graduate. Her hobbies are singing and dancing. Her interests lie in the cultural experiences of British Asian women. Her motto is: "A good head and a good heart are always a formidable combination," Nelson Mandela.
Britain welcomes Royal Baby Girl!
IM2 National Community Inspiration Awards 2015