The inaugural Include Me TOO National Community Inspiration Awards brought together children, young people and families to recognise the achievements of the disabled within the community. DESIblitz has all the highlights and winners.

"I understand very well how rewarding and challenging bringing up a disabled child can be."

The first ever Include Me TOO (IM2) National Community Inspiration Awards took place on March 29, 2015 at the Hilton Birmingham Metropole.

A national charity, IM2 recognises the importance of supporting equal rights and opportunities for disabled children and young people from all backgrounds.

The organisation which was founded by Parmi Dheensa (see our interview with Parmi, and her disabled son Callum here) works primarily with children and young people from an ethnic minority background, who sometimes struggle to find appropriate and relevant support for their needs.

In light of the success of the charity, and its continued support for families of disabled children, IM2 celebrated their inaugural ‘National Community Inspiration Awards for Disabled Children, Young People and Families’. 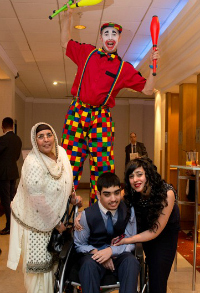 Marking both achievements and aspirations, the awards recognised families and carers as ‘Champions’, as well as encouraging children and young people to become Ambassadors and Role Models within their community.

Prime Minister David Cameron, who was unable to attend, sent a special message to Parmi and the finalists of the IM2 Awards:

“I understand very well how rewarding and challenging bringing up a disabled child can be. I passionately believe that every disabled child should be able to achieve their ambitions, including having a job they enjoy, and living independently.”

“I pass on my warmest congratulations to all the winners of the National Community Inspiration Awards. [They] clearly show what can be achieved, in every area, at every age, and in every community.”

The ceremony welcomed a plethora of families and young people as well as celebrity guests who were keen to show their support for the cause.

Hosts included popular British Asian actress, Nina Wadia, best known for her roles in Goodness Gracious Me and EastEnders; and British Hollywood actor ,Winston Ellis, whose roles include The Dark Knight and Pirates of the Caribbean. 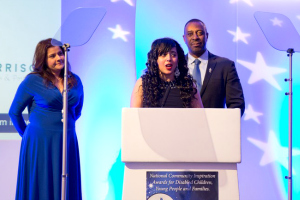 Welcoming the guests and families to the awards ceremony, Nadia commented on how important the IM2 awards were for the community:

“When I told my daughter I was going to be hosting this event, she asked me why. When I told what Include Me TOO was all about, she said, ‘That’s nice mum. Nobody likes to feel left out or like they don’t fit in’. I think that sums up why I’m supporting it quite nicely.”

Musical entertainment for the evening came from popular deaf popstar Sing Fletch who translates popular pop songs and performs them in sign language. Towards the end of the evening ambassador for IM2, Apache Indian also performed a selection of his hits for the crowd.

But of course the limelight rested on the many winners who picked up a prestigious IM2 award. Winners included 8-year old Thomas Barratt, who was awarded ‘Child & Young Person of Courage’. Thomas has a rare brain disorder and severe uncontrolled epilepsy.

Despite this, and the many medicines he takes on a daily basis to calm the seizures, he is well-known for his happy and bubbly personality, and his determination to overcome any challenges he faces. 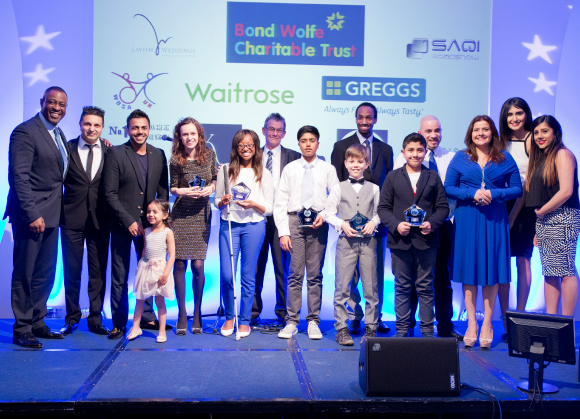 ‘Child & Young Person of Sport’ went to 11-year old Aamir Mitha, who was diagnosed with Bilecteral hearing loss at the age of 3. Aamir however became the first deaf student in kickboxing, and even achieved a black belt at Morrisons Kickboxing Academy.

‘Inspirational Young Persons Award (19-25)’ went to Memunah Hussain. Although deaf, she has completed a BA in Graphic Design at Huddersfield University, and is now doing an MA. She also runs a small photography business, and is a clear role model of what young deaf people can achieve with the right support. 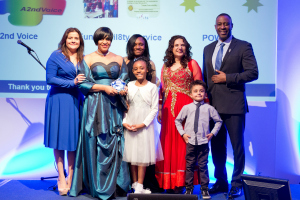 As well as recognising children and young people with disability, the IM2 Awards were also keen to highlight families of disabled children who show continued support against all the odds.

Winners included the likes of Sunny Bains, who won ‘Inspirational Father of the Year’. His son, Gaurav was diagnosed with a rare blood cancer at the age of 2.

Sunny and his wife launched an extensive campaign in order to overcome the shortage of Asian donors in the UK. His inspiring story encouraged many to set up Asian donor camps in numerous cities.

Here is the full list of winners for the Include Me TOO National Community Inspiration Awards for Disabled Children, Young People and Families:

Recognition of Professional Support
Yvette May

It is clear that the each of the IM2 awards signify the huge support that children, young people and families with disabilities receive on a daily basis, as well as the incredible roles that they also play in inspiring others in the community.

A great inaugural ceremony, we hope to see many more awards like this in the future. Congratulations to all of the winners.

You can take a look at all of the images from the IM2 National Community Inspiration Awards in the gallery below:

Priya adores anything to do with cultural change and social psychology. She loves to read and listen to chilled music to relax. A romantic at heart she lives by the motto 'If you want to be loved, be lovable.'
The Rise of Asian Women in British Politics
UK Visas require IELTS Language Test