Politics, sex and scandal are what you can expect from Dirty Politics, starring Mallika Sherawat, Om Puri and Jackie Shroff. DESIblitz has more.

"I want to be an independent woman who can take care of herself."

Queen of controversy Mallika Sherawat returns after a long hiatus from the silver screen with Dirty Politics.

Written and directed by K.C. Bokadia, the film has an ensemble of some of the best actors in the industry. They include Jackie Shroff, Anupam Kher, Om Puri, Atul Kulkarni, Ashutosh Rana, Rajpal Yadav and Naseeruddin Shah.

After gaining much attention for its bold scenes and classic item numbers from Mallika, the film has been gaining momentum across India and was almost faced with a ban for ‘objectionable scenes’ but this was later lifted.

Dirty Politics follows the story of Anokhi Devi (played by Mallika Sherawat). She is an ambitious woman who will use all her means to become the next chief minister of the country. 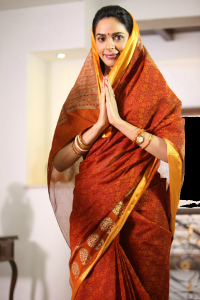 But it’s not that easy. India is very much a man’s world. How will Anokhi Devi achieve her dream? How will she fight this patriarchal system? Dirty Politics tells the story of the struggles and obstacles a woman has to overcome in the world of politics.

After the release of the first look, there has been a lot of controversy surrounding the film.

One of the major controversies included the poster of the film, where Mallika Sherawat was draped in nothing but the Indian flag sitting on top of a red-beacon Ambassador car outside the State Legislative Assembly of Rajasthan.

This didn’t go down too well with a lot people – with some calling it an insult to the flag and others calling it obscene. It reached to a point where one leader of a political party even filed a petition in Indore district court against the poster.

However none of the controversy has bothered director Bokadia, with him saying: “People are targeting our film because they don’t want us to release the film. There should be a valid reason to change the poster… I am not going to change the poster of my film under any pressure.”

Mallika also added: “The director just told me that this is the photoshoot and I was there … Ashutosh Rana [co-star in the film] was there, so we were just doing our job.

“I didn’t think it would become such a big ­deal. The tricolour is nobody’s monopoly, we live in a free country and it is a democracy.” 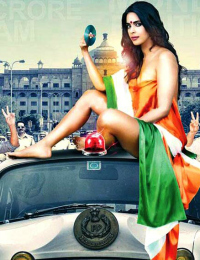 Another striking point about the film are the bold scenes with veteran actor Om Puri, with Mallika Sherawat quoting that ‘it was uncomfortable’ doing those scenes with him, although he was very professional, which made it easier.

However, Mallika caused a mini upset with her co-star when she said on Comedy Nights with Kapil: “Om Puri dyed his hair just before the bold scenes in the movie.”

The joke didn’t go down too well with the veteran actor, and Mallika had to later apologise.

Mallika who regularly makes it into the news for her bold style and views has been a constant source of intrigue for Indian audiences. During Dirty Politics promotions, numerous questions were raised about the actress spending a lot of time in LA instead of India:

“This is a myth. I have not left India. Bollywood is my home. I am here because of everyone’s support,” the actress insisted.

She also mentioned her relationship with the other Bollywood celebrities in Mumbai: 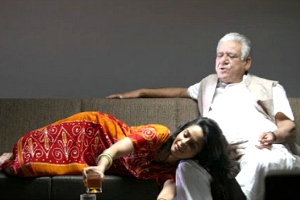 “These camps and groups are not important for me. I want to be an independent woman who can take care of herself. I have never been part of any group and I’m happy being who I am.”

Set in the backdrop of urban Rajasthan, Dirty Politics’ regional album has some songs that might catch your attention.

Music has been given by Sanjeev Darshan and Aadesh Shrivastava, while lyricist Sameer pens down the two songs on the album.

After leaving a mark with her dance track ‘Jalebi Bai’ from Double Dhamaal, the sensual actress has another regional folk dance number to her name now. ‘Ghaghara’, the catchy hook and tune definitely gets the audiences feet tapping.

The final song on the soundtrack is ‘Chal Dum’, which is a sensual song that really depicts and reflects the bold theme and characters of the movie.

With so much controversy and intrigue surrounding the film, it is certain that Dirty Politics will open to good figures at the Box Office.

But Bokadia has also been hit with claims that the film is about prominent Indian nurse, Bhanwari Devi, which almost halted the release of the film:

“My distributors are panicking. It’s just 48 hours before release and we’re faced with these huge legal problems. On top of all my woes there are the Holi holidays from Thursday. If I don’t meet my Friday release I am in a serious financial mess,” Bokadia said.

“I’ve repeatedly said Dirty Politics is not about Bhanwari Devi. If people still want to make their presumptions and harass me then what can I do?”

Despite all the legal battles, Dirty Politics will release from March 6, 2015.

British born Ria, is a Bollywood enthusiast who loves to read books. Studying film and television, she hopes to one-day produce good enough content for Hindi cinema. Her motto is: “If you can dream it, you can do it,” Walt Disney.
Aishwarya Rai Bachchan covers Vogue India
Indian Summers thrills with lies and manipulation