"Yes, there was a maternity leave, just like any other working woman."

Beauty, glamour and chic are what you can expect from the gorgeous Aishwarya Rai Bachchan.

With a sexy fringe that makes her coloured kohl-lined eyes pop, the actress oozes sophistication in a Tommy Hilfiger fur jacket and a sheer Saint Laurent blouse. 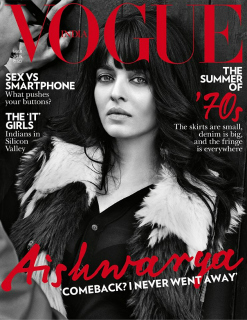 It is clear the 41-year-old hasn’t aged a day as she gets candid about her new film, working in the South and being crowned the most successful Miss World ever.

Having taken a small break from the big screen following motherhood, fans can expect the blue-eyed beauty to return to acting in Sanjay Gupta’s action drama Jazbaa in October 2015.

Co-starring with the immensely talented Irrfan Khan and Shabana Azmi, audiences are impatiently waiting to see the stunning actress back in action.

But in her Vogue Interview, Aishwarya is adamant to clarify what she thinks about the buzz surrounding her so-called ‘comeback’:

“Yes, there was a maternity leave, just like any other working woman. In fact, I was working right up to my sixth month, with my various product endorsements and other stuff. There were no movies, obviously,” Ash tells Vogue.

“Yes, and the UNAIDS work carried on as well. They had approached me way back in 2001, and I had declined it then; there was too much going on at the time for me to do justice to it. 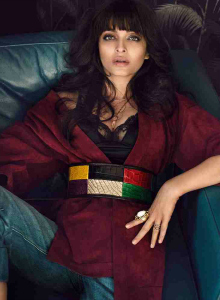 “I wanted to be more than just a pretty face issuing PSAs; I wanted to be hands-on. And now, 12 years later, this seemed like the perfect time.”

The international superstar who has also been crowned ‘the most successful Miss World ever’, was recently seen making an appearance on the 2015 Miss World stage.

Speaking to Vogue about her experiences during the pageant, the gorgeous actress took a trip down memory lane to describe the post-winning stage, saying:

“When you’re crowned the Miss World, there are two options available to the winner: either you move around with them for that whole year doing the global ‘spreading of goodwill’ or you opt to go back home and fly out only when you’re needed.

“For almost eight months in that year, I was at home [with family] working non-stop to meet all my Miss World commitments. The impression of being busy was formed in that very year itself. And they do keep in touch.” 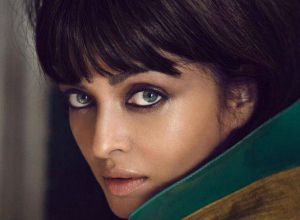 Being named as one of the most beautiful women in the world, the actress also talked motherhood in her interview, mentioning how she wishes she had more time with daughter Aaradhya, but in general everything was ‘cool and lovely’.

Although giving very little away about her personal life, the Mangalorean beauty also touched upon the South Indian film industry and her deep connection with it.

Starring in a number of South films herself, the actress has played pivotal roles in Mani Ratnam films, such as Raavan and Guru. Speaking about her experience, she says:

“There has been always a notion that you do South Indian movies because you’ve failed in Bollywood. That has never been the case with me.

“Working with Mani Ratnam is, and should be, every serious actor’s dream,” Aishwarya insists.

To read the full interview and to see the beautiful Aishwarya Rai Bachchan looking her absolute best, check out the March 2015 edition of Vogue India.