Jacqueline Fernandez is the newest IT girl to grace the cover of Vogue India. DESIblitz has the latest on the July 2015 issue and all of her gorgeous looks!

“She’s a charmer, never needs rest and keeps herself satiated.”

It is the first time Jacqueline poses for the iconic cover. Not that you can tell, because she has absolutely nailed it!

Wearing a daring cut-out designer gown, made by Lebanese fashionista Zuhaid Murad, the sexy bombshell heats up the July cover.

The Kick actress turns into the ultimate seductress with her red, bold lips and sleek, Hollywood-esque hairstyle.

The risqué gown featured in the cover shoot drapes gorgeously around her enviously curvy figure, whilst the plunging neckline dramatically accentuates her ever present sex appeal.

July is a busy month for the former beauty queen. She is expected to help promote Bangistan (2015), in which she has a cameo appearance. With Riteish Deshmukh in the lead, the comedy film will open on July 31.

We will see even more of Jacqueline as her second summer movie will be released in mid-August. She stars alongside Akshay Kumar in the action-drama film, Brothers (2015). 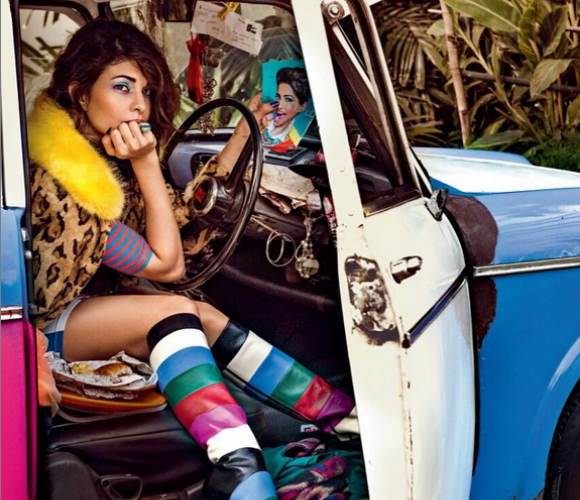 This model-turned-actress is working up an impressive list of cinematic achievements. It seems her latest ambition is to become Bollywood’s IT girl.

But she remains as level-headed as ever. Posting on her Instagram page, she humbly basked in her recent achievement with this caption: “And it all began with a dream.”

Working the camera like a true diva and looking drop dead gorgeous, Jacqueline will be one to watch in 2015!