Aishwarya Rai Bachchan graces the cover of Vogue India’s April 2018 issue. But this time she is joined by American rapper Pharrell Williams. The hot duo looks effortlessly cool as they pose together.

the duo makes an unlikely but interesting pair on the cover

Aishwarya Rai Bachchan once again graces the cover of Vogue India, but this time with a partner and it’s not her husband Abhishek!

The Bollywood diva is seen posing with American rapper and singer Pharrell Williams for the April 2018 issue of the popular fashion magazine.

Sportswear meets high fashion chic in this Vogue shoot. The quirky cover features Aishwarya in a blue bodycon dress with frills. She looks stunning with her beautiful red tresses flowing over one side of her face.

Tugging Pharrell’s sweatshirt strings while he holds her waist, the duo makes an unlikely but interesting pair on the cover. 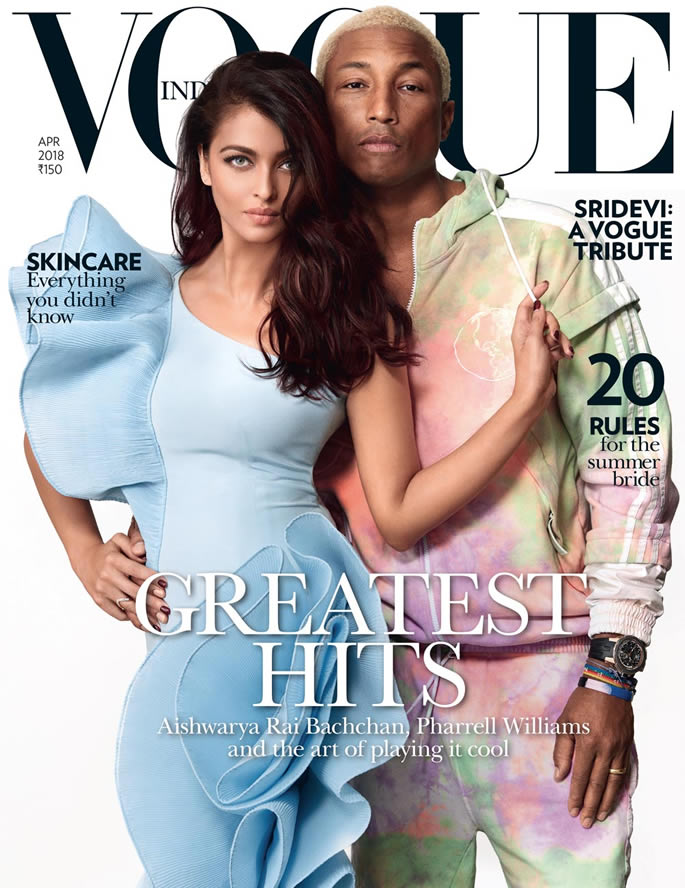 Pharrell’s colourful pastel sweats are a good choice opposite Ash’s fringed dress. The singer’s recent visit to India was a colourful one since he celebrated the festival of Holi with a host of Bollywood celebs in Mumbai.

The festival is the inspiration behind Pharrell’s latest collection with sports brand, Adidas. The music producer has produced a Holi range featuring sweats and sneakers covered in multi-coloured pastels.

The singer’s Indian adventures went viral over social media and his confused expressions while celebrating Holi with Ranveer Singh rocked the meme world. 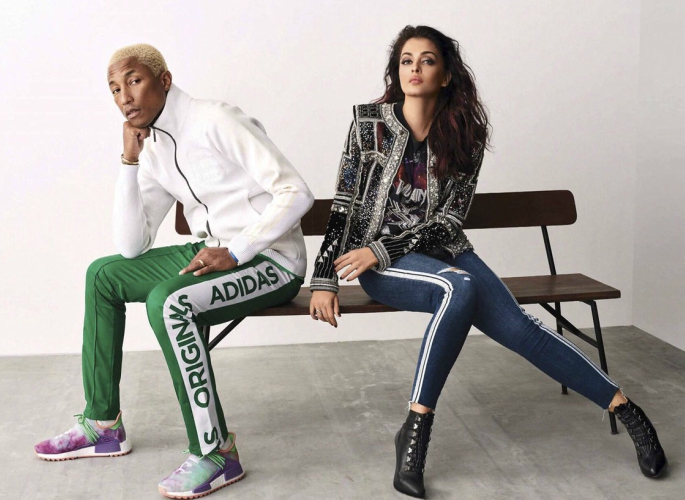 If the cover drew your attention, more pictures of Aishwarya and Pharrell from the photo spread show the hot duo looking even better.

In one image, Aishwarya has her arm around Pharrell’s shoulder. They are both are seen sporting vibrant red outfits. 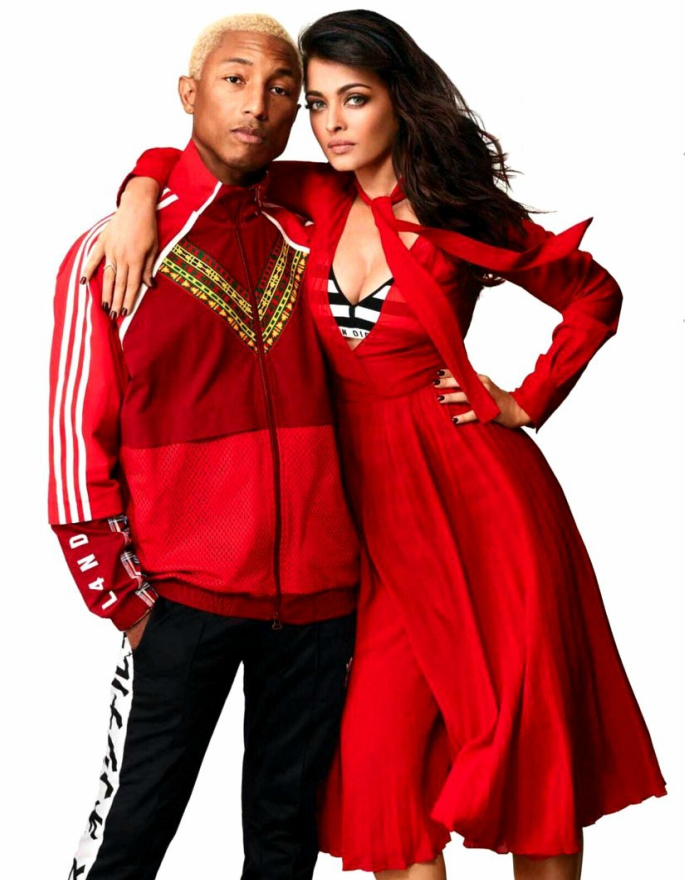 The issue also includes solo pictures of Pharrell and Aishwarya where both are introducing some stylish jackets.

In another photo, Aishwarya and Pharrell are clicked in black and white where she is holding him by his arm. Bachchan’s bejewelled jacket certainly stands out! 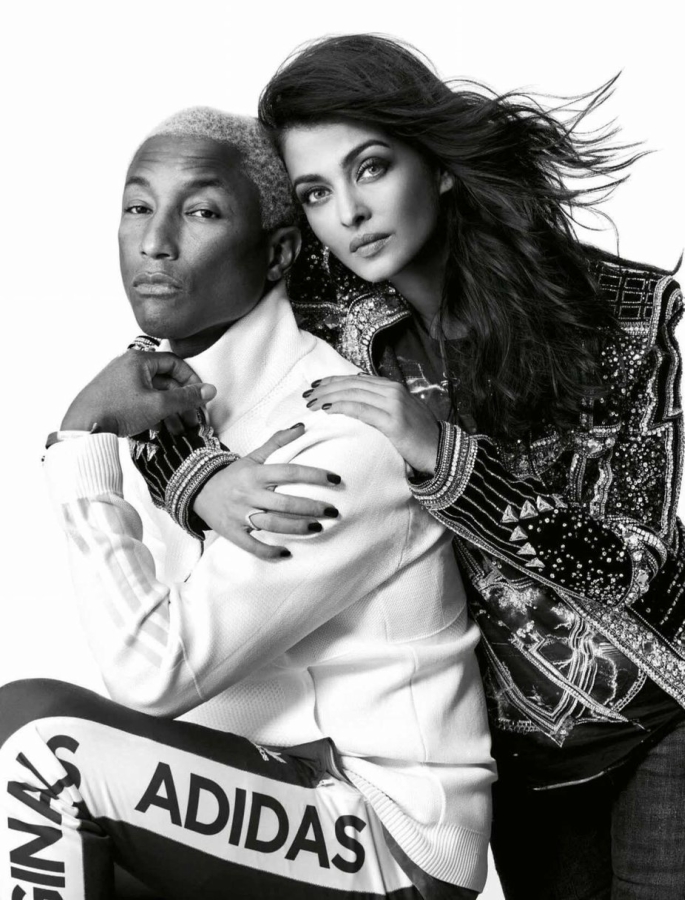 There are also a few solo pictures of the Jazbaa actress in the issue. Aishwarya is seen wearing an elegant white hat and turquoise and blue waterproofs. 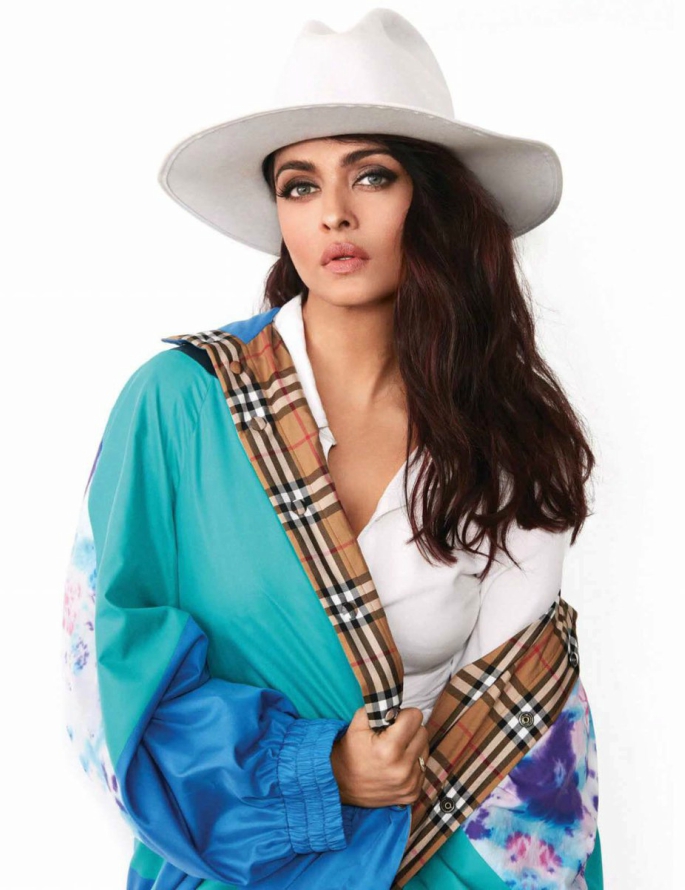 In another photo, Ash shows off her salsa pose as she sways in a high-slit striped skirt and a blue blouse.

In the April issue, Aishwarya has opened up about the perceptions people have regarding her relationship with her young daughter Aaradhya.

She said: “I spend all my time with Aaradhya, and I have one nanny, by choice. I read comments saying, ‘Ah, she must have an army of help’ and I understand the perception, but I choose this way, which means life is always busy.

“I respect homemakers for the endless work they do.” 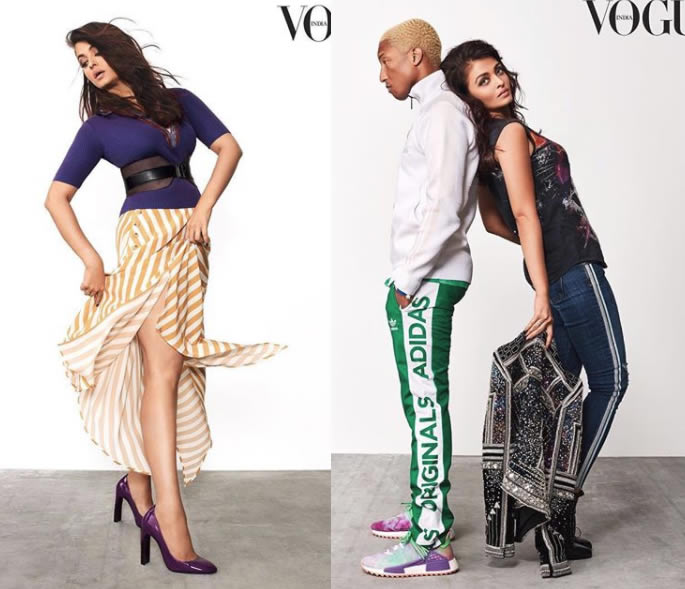 Ash will be essaying the role of a singer and she is for the first time seen sporting burgundy curls for the role.

Aishwarya also confirmed that she has been approached for the remake of Bollywood classics such as Raat Aur Din to reprise the role of veteran actress Nargis and also the acclaimed thriller Woh Kaun Thi. More details on these upcoming projects are to be announced soon.