With the help of 10 children across the UK, cricket competition The Hundred has built an immersive stadium in Minecraft.

“It’s been fantastic to see the levels of creativity"

Cricket competition The Hundred has partnered with 10 imaginative children to build an immersive stadium in Minecraft.

The Hundred is a revolutionary competition that combines entertainment with world-class cricket.

With over six million children in the UK playing Minecraft weekly, this virtual stadium will engage a wide audience of young fans and take cricket into their world to excite them about the upcoming competition.

Minecraft-loving children across the country were invited to take part in The Hundred’s Every Block Counts and create their ultimate cricket stadium experience with no limits.

The entries were imaginative and the top 10 designs included everything required for the virtual stadium.

Named The Space Bowl, the world has an array of showstopping features including a rooftop garden filled with wildlife, a rainbow arch, a boundary moat, disco lights, a rollercoaster, cricket ball-shaped VIP boxes and even a see-through wicket with changing room views.

Taking 150 hours to build and with 1.3 million blocks, this is the first-ever sports stadium built in the world-famous gaming platform through a children’s competition.

“It’s been fantastic to see the levels of creativity from this competition.

“We’ve seen submissions beyond our wildest expectations and the final build truly is a blockbuster cricket stadium.

“It’s been incredible to be part of this initiative; another first for The Hundred as it continues to push the limits in sport and entertainment.”

Not only were the winners’ ideas brought to life but they also won tickets to a game of their choice with their family, the opportunity to meet and greet players playing in this year’s competition, a personalised junior shirt for the team of their choice and giant personalised Topps card and additional Topps cards products.

Ten-year-old winner Polly said: “My design idea is unique, with features like the boundary moat to know if the ball has hit the edge.

“I was so excited to hear that my idea was being built in the Minecraft world, I think other children who love cricket and Minecraft as much as I do will really enjoy exploring it.”

Talking about her cricket ball-shaped build with a rainbow canopy, 12-year-old Thea said:

“As soon as I read the brief, I knew that I had to do something colourful. The arch over the stadium is a rainbow to celebrate diversity.” 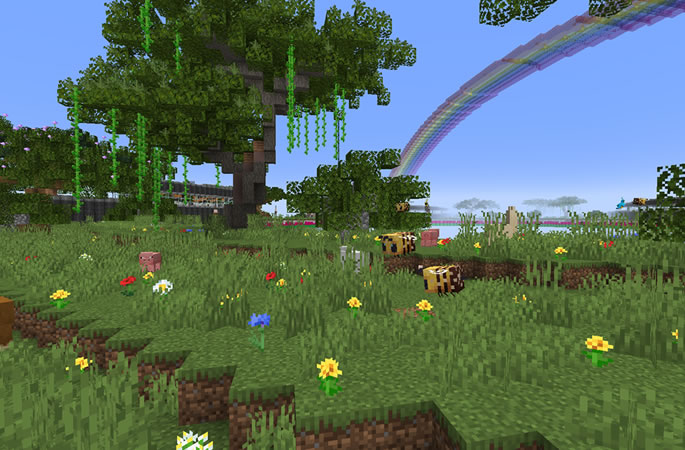 Rosie, aged eight, explained: “In Minecraft your imagination can run wild and free, and I wanted this stadium to have everything!

“I’ve gone for sea creatures swimming around the pitch as you watch the games.”

“Our boys both love playing Minecraft and, living close to Headingley Stadium, The Hundred massively caught their imaginations last year.

“Both children loved the challenge of designing Minecraft-inspired cricket stadiums, and we’re thrilled that Samuel’s design was chosen as one of the winners.” 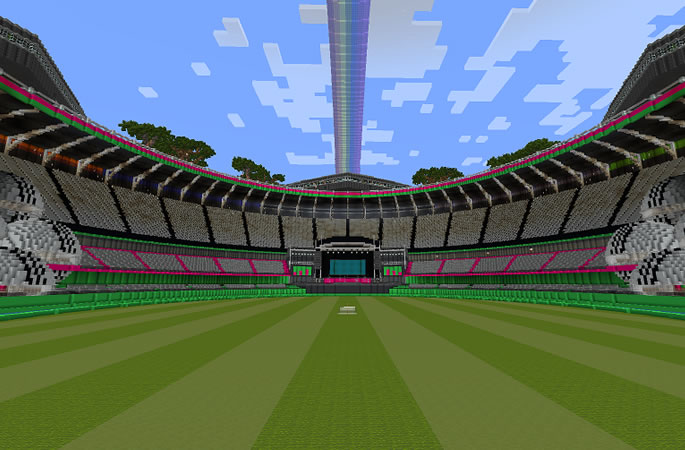 James Delaney was the architect responsible for constructing the stadium and he spoke to DESIblitz about the creation process.

How did you find the experience of creating the Minecraft stadium and is it different from anything you have done before?

This isn’t like any other project I’ve done before!

As the first-ever sporting stadium brought to life in Minecraft through a nationwide kids competition, I’m really excited to be a part of it.

It was great to look at the 10 different stadium ideas of the kids and combine this into The Space Bowl – from rainbow arches to interactive fireworks displays and even a rollercoaster.

Completion took 150 hours and it’s composed of 1.3 million blocks – it’s been so great to see the final build which has incorporated some wonderfully unique features.

What was it like working with the children on the project?

I’m always surprised by the creativity and imagination of young people.

I was really impressed by all of their amazing ideas, they had clearly put a lot of time into them and it was great to see important themes such as sustainability and inclusivity represented.

Some had already built their ideas in Minecraft and I was blown away by their skills.

Talk through the creation process. What methods did you use?

Fortunately, when working on projects like this we have some tools to help speed things along.

We use special creator tools such as WorldEdit which turns Minecraft into more of a computer-aided design platform, allowing us to copy/paste and much more.

This also allowed us to iterate quite quickly, we can test out different designs and see what works – this was particularly important when trying to incorporate so many existing ideas from the kids’ design entries.

Were there any challenges/obstacles when creating the stadium?

One of the hardest parts of the project was incorporating all of the great ideas from the kids’ design entries into one cohesive building.

We had to be truthful to their concepts, whilst also interpreting them in a way that made sense in the bigger picture.

Do you think these collaborations between sport and technology (Minecraft) will become more common in the future?

Technology and gaming can provide a unique experience for fans to interact with sport in a way that they have never done before – this project is a great example of that.

Your imagination is the only limit in Minecraft, which opens lots of opportunities for fans and sports as a whole.

The virtual stadium was unveiled before The Hundred kicks off on August 3, 2022, and is open for everyone to explore and interact with.

The Hundred returns for its second year after smashing records in 2021.

With family-friendly blockbuster entertainment and fast-paced cricket action in equal measure, fans are set for another memorable summer.

Ticket holders can expect sensational live music performances, nail-biting games and even more to explore off the pitch.

Men’s and women’s games kick off on August 3 and 11 respectively, with the final taking place on September 3, 2022. 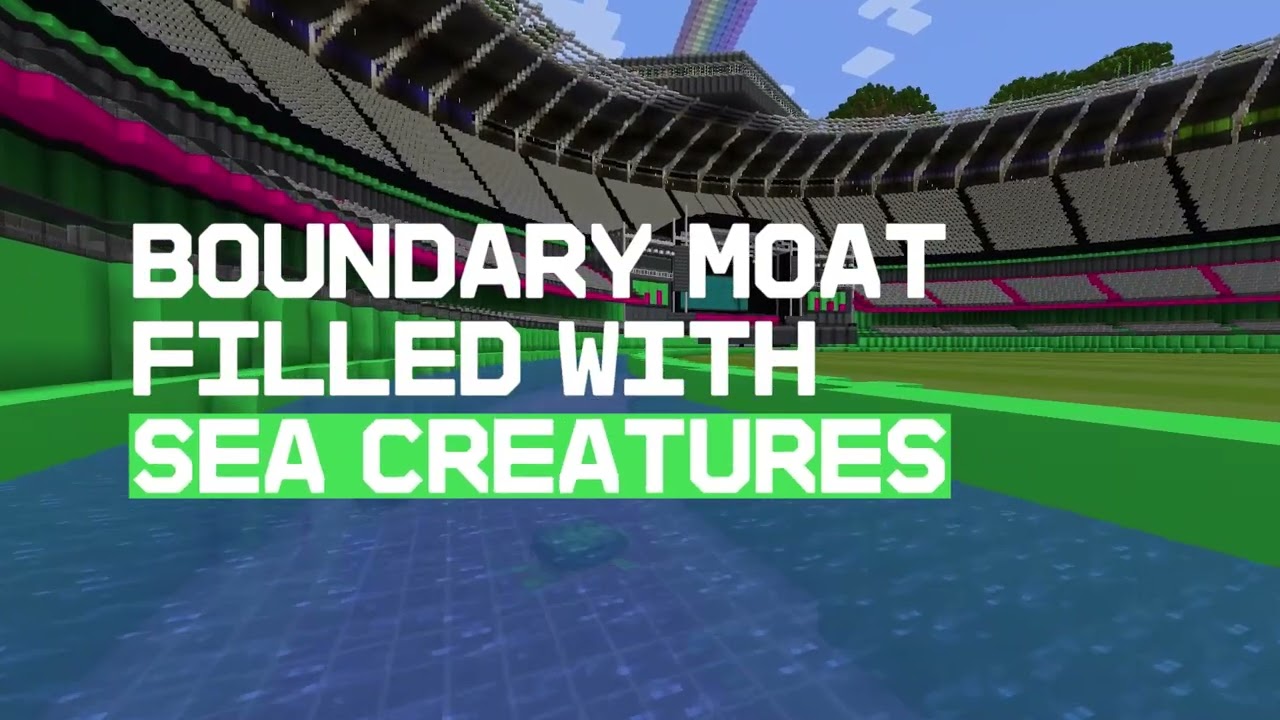 Dhiren is a journalism graduate with a passion for gaming, watching films and sports. He also enjoys cooking from time to time. His motto is to “Live life one day at a time.”
Priyanka Chopra’s homeware brand trolled for ‘Ludicrous’ Pricing
Teenager attends Prom in £3 million Bugatti