SRK and Kajol are Dilwale on British TV

With the release of Dilwale fast approaching, Bollywood’s most iconic pair, Shahrukh Khan and Kajol, took British TV by storm, with appearances on The One Show, This Morning, and Sky News.

"You are such a busy man, we are lucky to have you!"

One of the biggest Indian films of 2015, Rohit Shetty’s Dilwale marks the return of the most iconic jodi in Bollywood history, King Khan and Kajol.

But before the release of their movie, the pair have gracefully given their UK fans something to look forward to with appearances on The One Show, This Morning and Sky News.

This is the first time that Bollywood stars of their calibre have visited so many British TV shows to promote their film.

The last time we saw Shahrukh on British television was the Friday Night with Jonathan Ross Show, when he spoke about My Name is Khan in 2010.

This time around, Shahrukh and his Dilwale co-stars, Kajol, Varun Dhawan and Kriti Sanon, arrived to promote the Rohit Shetty masala film, which releases on December 18, 2015.

SRK was snapped only the night before at the Absolut Elyx Filmfare Glamour & Style Awards on November 30, where he picked up two awards, including ‘Most Glamorous Star (Male)’ and ‘Global Icon of the Year (Male)’.

The following morning, on December 1, viewers saw him chatting to Eamonn Holmes and Holly Willoughby on ITV’s This Morning. 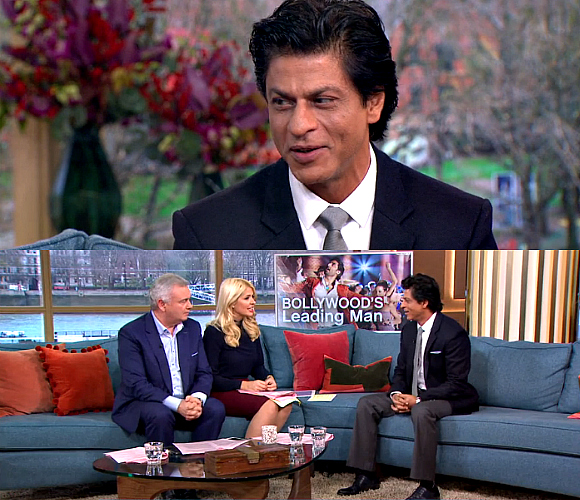 The actor dropped by the show directly after flying into London in the early hours. He spoke about his success in Bollywood to date, how many movies he has acted in, how many awards he has one, and how many followers he has on social media.

Holly said: “You are such a busy man, we are lucky to have you,” whilst Eamonn was corrected by Shahrukh when failing to realise the difference between Dilwale the movie and Diwali the festival.

Shahrukh even tweeted about his appearance on This Morning on his Twitter page.

Alongside a special press conference for Asian press at Cineworld Feltham, SRK also made a few more TV appearances throughout the day.

Varun Dhawan, Shahrukh’s co-star in the film, joined him on Sky News where Khan was given a grand introduction.

The presenter called Khan the ‘biggest star in the world’, adding: “His record speaks for itself, 80 movies over 20 years.” 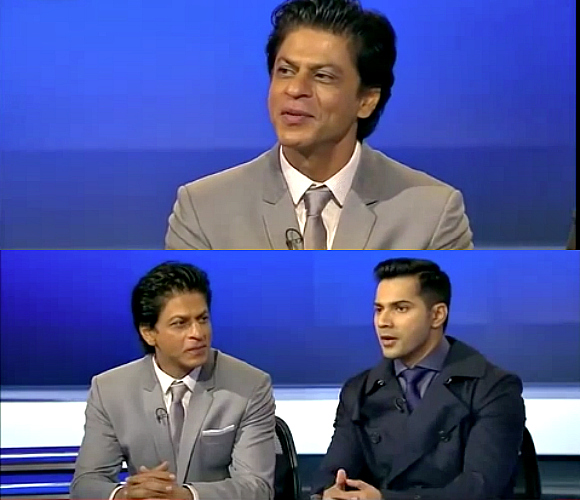 While the presenter added that it was ‘vulgar’ to talk about money, she mentioned that SRK earned more than Tom Cruise and Johnny Depp.

With an estimated fortune of £265 to £400 million, the actor is also dubbed as ‘India’s equivalent to George Clooney’.

Shahrukh responded saying: “I think I became a star because of the audience in the UK and the US. So I owe my stardom to them.”

Finally, SRK took his favourite Bollywood heroine, Kajol, to The One Show, where he inevitably arrived late, causing presenters Alex Jones and Matt Baker to look for fillers to keep viewers engaged.

But in classic Shahrukh humour, the actor joked about his late appearance, blaming his undeniable superstar status:

“We apologise for being late … But it was my doing … I’m a superstar!” 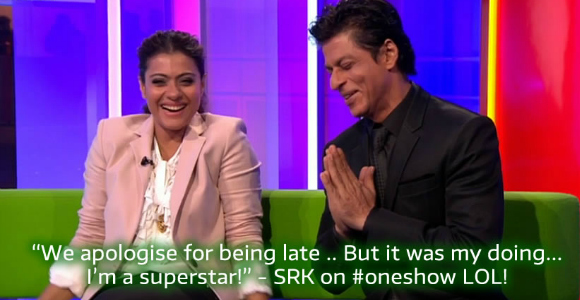 The jodi discussed the continuity of their romance from Dilwale Dulhania Le Jayenge (1995) to Dilwale, while the studio audience laughed and cheered them along.

Shahrukh commented on their latest flick as being full of action and drama – in true Rohit Shetty style – but also having a romantic angle to it.

Overall, Khan charmed the British nation, reminding us once again why he is the undisputable King of Bollywood.

Dilwale will hit cinema screens around the world on December 18, 2015. Fans will be reunited with their favourite on-screen couple, Kajol and SRK, as well as a brand new love story with Varun Dhawan and Kriti Sanon.

Rest assured Shahrukh has definitely conquered London yet again and has certainly made the release of Dilwale one to look out for!

Images courtesy of Sky News, The One Show, This Morning and Shahrukh Khan Twitter

Aziz Ansari is the Master of None
Hrithik and Kareena reunite after 12 years?