Why is Slavery Still Prevalent?

Recent media reports have highlighted the phenomenon of modern day slavery in India and some instances even in the West. DESIblitz investigates the issue and reveals why trafficking and exploitation continues unabated in many areas of the Indian subcontinent.

"[She was] a victim of human trafficking... she has been treated as a slave."

If you thought slavery was a thing of the past, you would be horrified to know that it still exists and millions are still affected by it in developing nations like India and Pakistan.

According to the Global Slavery Index 2013, there are 29.8 million slaves across the world. The report, released by an Australian rights group named Walk Free, sees India top the list with an incredible 14 million slaves. Pakistan follows in a close third.

“It would be comforting to think that slavery is a relic of history, but it remains a scar on humanity on every continent. This is the first slavery index but it can already shape national and global efforts to root out modern slavery across the world.” 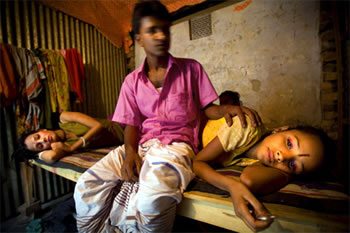 Many of the enslaved in India are unable to move out of their villages.

An earlier report titled, Trafficking in Persons (TIP), compiled by the US State Department revealed that an estimated 20 to 65 million women, men and children in India are bonded labourers to local landlords, who force them to work in industries like embroidery factories, agriculture, rice mills and brick kilns.

Many girls and women from Odisha and the northeastern states are coerced or sold into forced marriages in states like Punjab and Haryana which have low gender ratios of women to men. They are then forced into the commercial sex trade.

Last year, the National Human Rights Commission had highlighted the exploitation of bonded manual labourers in Meghalaya who had been employed to work in private coal mines in the state’s Jaintia Hills area. 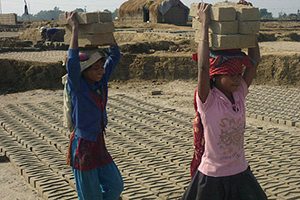 Slavery in India is made possible by the fact that millions of rural poor people still have difficulty in accessing government entitlements and protections like food ration cards, health care, pensions and other safety nets.

Many of the enslaved do not have identification documents, so they do not exist officially in government records. These hapless labourers are easily exploited by high caste groups who continue to dominate assets and indulge in land grabbing.

The British abolished slavery in India in 1843, but it seems that the effects of colonial rule are still prevalent today, with slavery being a predominant issue.

Today modern slavery is not only restricted to rural India. In the cities, domestic workers are enslaved and trafficked by shady employment agencies that are mostly unregulated:

“The placement agencies get all the money, and the poor girl gets nothing,” says Rishi Kant, a social activist.

“The girls are abused mentally, sexually, physically. Officials don’t care, and sometimes even want maids for their own houses, [which is] partly why they’re silent on this.”

It is pertinent to note that India still has not ratified the Worst Forms of Child Labour Convention.

The root causes of modern day slavery in India seem to be caste issues, corruption, poverty and weak law enforcement. The government’s failure to empower police, enforce laws and provide social services to the poorest only exacerbates the situation.

If you thought modern day slavery exists only in developing nations like India, you would be totally mistaken. Many instances of trafficking and exploitation in the West have also been highlighted by the media. 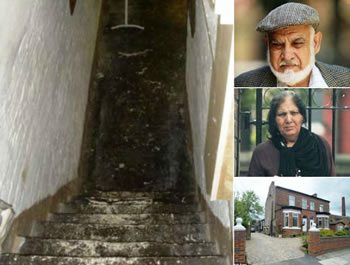 In the UK, an 84-year-old man named Ilyas Ashar was recently sentenced to 13 years in jail for repeatedly raping a deaf and mute girl who had been kept locked up in the cellar of his home in Eccles, Salford. His wife Tallat Ashar was also sentenced to five years imprisonment.

The girl had been trafficked from Pakistan and the couple had forced her to work as an enslaved domestic servant. Ilyas Ashar was also convicted for using the girl’s details to fraudulently obtain benefits totalling more than £30,000.

In another recent case in the UK, a senior government official named Shibhani Rahulan was taken to court by her maid Pratima Das in an instance of modern day slavery.

Das’ counsel, Ian Wheaton, said: “[She was] a victim of human trafficking… she has been treated as a slave.” Das has applied for asylum in Britain which is under consideration by British authorities. 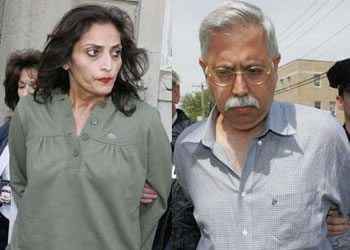 In yet another instance of forced labour exploitation in the West, a wealthy US couple Murlidhar and Varsha Sabhnani have been convicted of treating two Indonesian women as virtual slaves in their New York home.

The Indonesians, Nona and Samirah, had been severely abused by the Sabhnanis who had confiscated their passports. The couple were convicted on 12 charges including forced labour, harbouring aliens and involuntary servitude.

Black slavery is a thing of the past in the US. But African-Americans continue to suffer as today there are more black men in the prison system than slaves back in 1850.

The Caribbean nations of Haiti, Suriname and Guyana also feature on the global slavery index. In Haiti, the phenomenon is blamed on the ‘restavec’ system of child exploitation which encourages poor families to send their children to richer families. These children end up being abused or exploited ruthlessly.

In summary, it is disheartening to see that some people of South Asian origin continue to practise regressive ways and exploit their fellow humans even after migrating to the West. Such instances tarnish the image of people of Indian origin and South Asians in general who are regarded as a model community in many western nations.

Is there a solution in sight? Or will man’s inhumanity towards his fellow man continue despite advances in science, technology, and tangible improvements in living standard across many parts of the developing world, including India?

Arjun loves writing and has a Master’s degree in Journalism and Communication from The Ohio State University in the U.S. His simple motto is “Do your best and enjoy the rest.”
The Rise and Fall of India’s Courtesans
Sex before Marriage still a Taboo?