Pakistani girls are getting married to Chinese men, however, it is just a pretext as they are later forced into sexual slavery.

"I had been bought by one of the Chinese men."

Vulnerable Pakistani girls dreaming of a life away from poverty have been caught up in a racket ran by Chinese nationals in Pakistan luring the women into sex slavery in China under the pretext of marriage.

Many have been promised a life of luxury if they get married to a Chinese national, but once they agree, after they are married, they are being forced to participate in prostitution in China.

Many lower and middle-class Pakistanis want to move out of the country for the sake of a better life, and China is being seen as an attraction for many of them. Especially, young Pakistani women.

April 2019 saw the first expose of the Chinese rackets of trafficking young Pakistani women under the pretext of marriage.

The Federal Investigation Agency (FIA) of Pakistan has since commenced a major crackdown, arresting those involved in the sex slavery rackets.

Pakistani Cities such as Lahore, Islamabad and Faisalabad have all been affected by the Chinese gangs operating to recruit women via marriage. 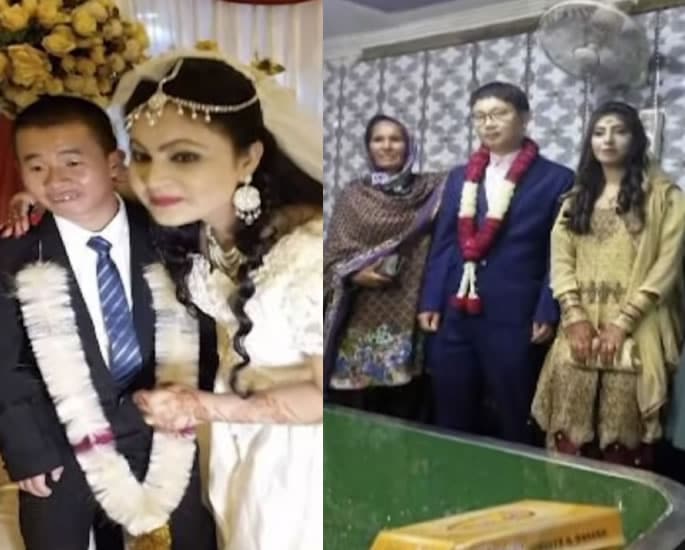 Some of the women in Lahore who survived the ordeals have opened up about their experience.

One girl, who has been called N* to protect her identity spoke about her ordeal after she was found at a bungalow in an upscale neighbourhood in Lahore. She was there along with other young girls.

N and the other girls shared the property with 10 Chinese men. They treated the girls as nothing more than sexual objects.

All of the girls were lured to the bungalow by the same woman using the same offer.

N said: “She offered us a chance, a dream of a better life far away from hardship.

“All we had to do, she told us, was marry a Chinese national and soon we would be living a life of luxury in China.”

Although the prospect of moving to another country seemed daunting, it could be the one chance that the Pakistani girls could get at escaping poverty.

The girls consented to move into the bungalow as they were driven by the dream of life without hardship.

“We were told our stay here would be temporary.

“We were told we would only have to wait a few months. Once our nikahs with our Chinese husbands were solemnised, we would be in China in no time.”

N believed the woman as she was kind to beggars, however, she soon realised her motive.

“I learnt from the woman who brought me here that I had been bought by one of the Chinese men. She did not say for how much.

“All this time and even now, this house is a prison for us girls. We are only allowed to move from one room to another. We cannot move freely. I cannot live like this.”

N was able to escape the house but the other girls were still there and had to answer to one person referred to as ‘The Boss’.

The Boss orders the girls to wear makeup and dress in western clothes at all times. The Boss also acts as a translator between the girls and their Chinese “husbands”.

Another girl, M* said: “When we want to convey something to our husbands, we leave a message in a cellphone The Boss uses.

“The Boss translates our messages to Chinese using an app and conveys them to our husbands.”

“Similarly, if our husbands want to tell us anything, they type their messages in Chinese on the cellphone and The Boss translates them in Urdu for us.”

M explained that she and other girls were forced by their “husbands” to sit with other men so that they could give them sexual favours.

She added that a Pakistani man who provides administrative work for the Chinese men raped some of the girls at the house.

Despite this, M and the other girls remained confident that they will go to China for a better life.

Some girls do end up going to China following their marriage but they are forced into prostitution.

The promise of marriage in order to lure girls into sexual slavery is an elaborate scheme by Chinese gangs.

Many gangs involve women who run brothels and ‘supply’ the girls. Lawyers also prepare legal documents in order to legitimise the girls’ marriage.

Some Chinese men even claim they have been converted in order to trick Pakistani girls into marriage.

A*, a girl experienced this. Once she was married, she was kept in a house in Islamabad and her husband began teaching her Chinese.

She filed a complaint when she found out that he was planning to lure her into prostitution.

As more cases have come to light, law enforcement agencies have started to take action against Chinese gangs.

“All divisional superintendents have been directed to immediately act upon her complaint and arrest the accused and those who facilitated them.”

Dr Waqas Abbasi, Director of the Federal Investigation Agency (FIA), spoke to The Express Tribune and said that there have been both Chinese and Pakistanis have been arrested.

More than 36 people have been arrested according to reports. 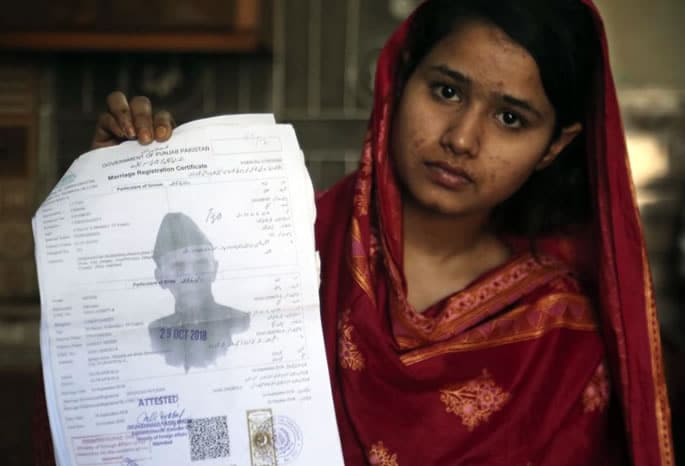 A young woman living in Islamabad,  Yamna Bibi, aged 24, was married off to a Chinese man after her father, Basheer Ahmed, a poor 60-year-old partially handicapped man, was approached by matchmaking agents.

“They said that they had a proposal from Chan Yen Ming, a Chinese national who had recently been converted to Islam, for my 24-year-old daughter Yamna Bibi.

They said that Chan was ready to bear all expenses for the wedding and that he would even allow Bibi to work in China.”

In January 2019, the marriage took place between Bibi and Ming. The father felt a burden had been lifted for one of his daughters. He said:

“It was a huge relief for me. After the marriage, Bibi stayed in Islamabad for a month and a half, awaiting her travel documents.

“We remained in contact with her during that time. After she received her documents, she flew out to China.”

Ahmed was under the impression his daughter would get a job and be able to send some money back because they were struggling financially.

However, once Bibi arrived in China the story changed. She called her father one day crying on the phone. Recalling the call he said:

“My daughter told me that we had been cheated.”

“Chan was not a businessman as the agents told us, and he tried to force Bibi into prostitution. When she refused, Chan beat her up.”

Then when Ahmed approached the matchmakers their response shocked him:

“I informed the matchmaking agents in Islamabad.

“Their chief was called David but his real name was Wei Lin Ping. I contacted Wei to inform him about the situation.

Eventually, in this case, Ahmed managed to get his daughter back in May 2019 by getting help from the Pakistan embassy in China. 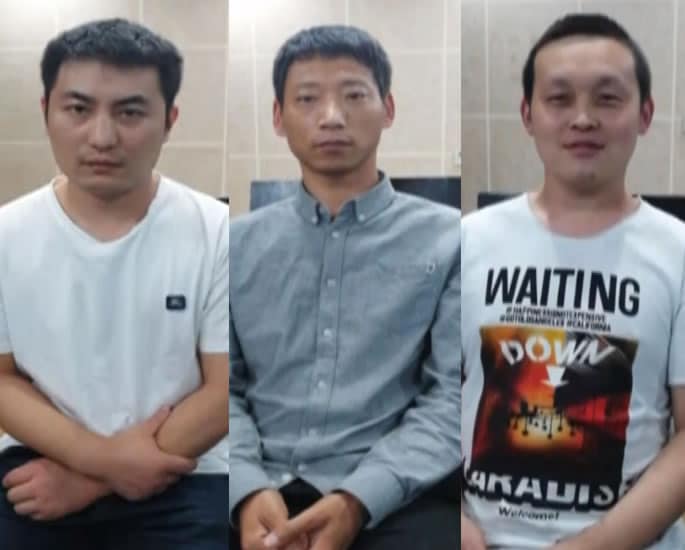 Xin Xianhai allegedly established a gang in which they smuggled Pakistani girls into China.

This comes after the FIA conducted raids in Faisalabad, Lahore and Rawalpindi and arrested some gang members.

An intelligence report stated that some Chinese nationals had rented a house in Eden Garden, Faisalabad. They claimed that they were working on a development project.

However, even after it was finished, they stayed there. The report also mentioned that the police had provided them with security.

Xianhai invited his brother-in-law, Wang Peng to Pakistan in August 2018.

The alleged gang leader, his wife and father-in-law operate a marriage bureau in China where they send pictures of Chinese men to their local agents.

They then share the pictures with Pakistani families in order to persuade them into the marriage.

Xianhai and Peng tracked down the girls through their local agents. The agents were paid if a marriage was arranged.

The wedding was paid for according to the intelligence report and financial assistance was also provided to their “in-laws”.

The Chinese grooms would stay in the Eden Garden house and would pay daily rent to Xianhai until they returned to China with their “wives”.

A number of “weddings” were fixed by an agent named Tariq Masih in 2018.

Another girl named Natasha Robin got married to Lee Changli on September 23, 2018.

She was in China for a few days before returning to Pakistan. She claimed she was forced into sexual activities and was tortured if she refused.

Another agent, Nadeem was paid hundreds of thousands of rupees to identify Pakistani girls for Chinese men.

He arranged the wedding of Saira with Dong Hya Hain, however, she divorced him and returned to Pakistan.

The Human Rights Watch (HRW) issued a statement on April 26, 2019. They called on China and Pakistan to take action against bride trafficking.

This followed evidence that Pakistani girls are at risk of sexual slavery in China.

The FIA explained that some Chinese nationals were arrested during a marriage ceremony at a hotel in D Ground, Faisalabad.

During the interrogation, the gang members revealed that the gang had connections with some of the locals.

They explained that their connections had played an important role in convincing poor Pakistani parents to get their daughters married to Chinese nationals on the pretext that their life in poverty would end.

More gang members who specialise in Pakistani bride trafficking into China are being arrested daily but the ordeal continues for many young women who are victims of the scam.

Dhiren is a journalism graduate with a passion for gaming, watching films and sports. He also enjoys cooking from time to time. His motto is to “Live life one day at a time.”
Cyber Scam Fraudster Must Pay £2M or Face More Jail
Newly Married Dad jailed for Reversing into Police Car