It has been reported that Chinese matchmaker centres are luring Pakistani girls for marriages which are fake in return for compensation.

"We remind both Chinese and Pakistani citizens to remain vigilant"

According to Pakistani media, Chinese matchmaker centres in Pakistan are luring Pakistani girls to participate in sham marriages.

In addition, reports say, the illegal matchmaking centres are also being used for human trafficking, forced prostitution and even for harvesting organs.

Women from poor backgrounds are targeted and are lured into fake marriages. They are then taken to China.

The number of Chinese people visiting Pakistan has increased since the launch of the China-Pakistan Economic Corridor (CPEC) in 2013.

The human trafficking revelation prompted the Chinese Embassy in Islamabad to respond on Saturday, April 13, 2019.

They said the businesses are prohibited under Chinese law and will work with the Pakistani authorities to crack down on these illegal activities.

Reports about fake marriages between Chinese men and Pakistani women regularly appear. This has prompted lawmakers to debate the issue and demand that officials look into the practice.

On Friday, April 12, 2019, ARY News showed images of a Chinese gang with six local women in different rooms at an illegal matchmaking centre in Lahore.

It was heard that two of the locals were teenage girls said to be as young as 13. 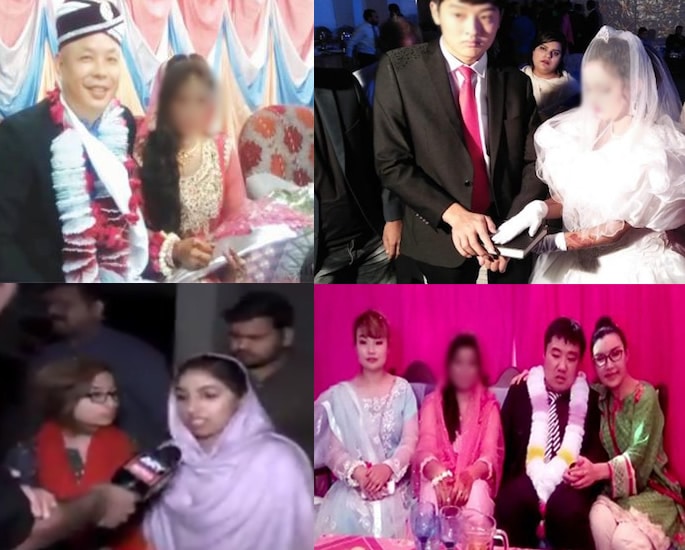 Many images of such weddings show the Chinese grooms posing for the photos to simply document the weddings.

Many of the Pakistani women as well do not look completely comfortable as brides who have happily married out of pure choice.

The channel turned up unannounced at the building along with police officers and spoke to all those present.

It was revealed that they produced fake documents which stated that they had converted religions before marrying the women.

The investigation found that dozens of Chinese nationals visit Pakistan with the intention of having a fake marriage with Pakistani women.

One girl explained that she was rescued at Islamabad Airport just as a Chinese man tried to take her to China.

The victims stated that in return for marrying the men, their families would be paid around £230 per month and male family members would be given a Chinese visa.

Families would get lured into an agreement by claiming their would-be Chinese son-in-law was seeking Pakistani citizenship so he could invest in the country as part of the CPEC.

In a statement, the Chinese Embassy said:

“We remind both Chinese and Pakistani citizens to remain vigilant and not be cheated. We hope that the public does not believe in misleading information and works together to safeguard the China-Pakistan friendship.”

Both countries have said that they oppose human trafficking and the sale of human organs.

They rejected the reports about the sale of human organs in China, calling them “misleading and groundless”.

The embassy added: “China is cooperating with Pakistani law enforcement agencies to crack down on illegal matchmaking centres.”

They explained that both Chinese and Pakistani youth were victims of illegal marriages.

Senior government officials reportedly said Islamabad was in contact with Beijing about the fake marriages and that action was being taken to stop this.

Tariq Sardar, spokesman for the Interior Ministry had said that “some private marriage bureaus were involved in these marriages” and “most of the complaints were being received from Lahore as well as the Pakistani city of Abbottabad.”

China has defended the CPEC as a productive initiative, saying it has created tens of thousands of local jobs and resolved a long power crisis in Pakistan.

While both countries are working together to bring down the fake marriage operation, it has been reported that a Chinese gang is active in various parts of Punjab, Pakistan.

Dhiren is a journalism graduate with a passion for gaming, watching films and sports. He also enjoys cooking from time to time. His motto is to “Live life one day at a time.”
Pakistani Wife Beaten and Stripped by Husband & Relatives
Pistol kills Indian Teen Filming a TikTok Video