Popular TV actress Shweta Tiwari opened up on her fight against domestic violence in a lengthy video on Instagram.

"I wish you all the strength, courage and integrity"

Shweta Tiwari opened up on her fight against domestic violence in a video.

The video was released on March 8, 2021, International Women’s Day, and it was addressed to her daughter Palak.

In the video, she asked her daughter to speak up against any form of violence.

Shweta, who has left two bad marriages, said her decision to speak up against domestic violence has only made Palak “sensible, intelligent and strong”.

The lengthy video was captioned:

“Dear Daughter: On this Women’s Day, I wish you all the strength, courage and integrity for you to fight your life’s battles.

“I hope my experiences and right actions become a guidepost as you navigate through life’s obstacles.

“To all the women out there: Don’t carry on silently when you are undergoing domestic abuse.

“Speak up, at least for your daughter’s sake, so that she doesn’t learn to remain silent when, God forbid, her life’s ship hits the rocks.”

“I know a lot of women around me are victims of domestic violence, who are quiet against it because they are scared that if they break their silence, what will happen to their kids?

“But remember, your kids are learning from you every day.

“If you stay quiet, they will learn to remain silent. They will end up going through the domestic violence.

“If you take a step, your kids will learn the difference between right and the wrong, and grow stronger in life.”

Shweta explained that people still tell her that her decision to leave her husband was wrong and that she should have thought about her children.

“A lot of people said a lot of things to me. Even now they tell me I should have thought about my kids, my daughter.

“But because of what I did, my daughter has grown to be sensible, intelligent and strong.”

“She understood the good and the bad.” 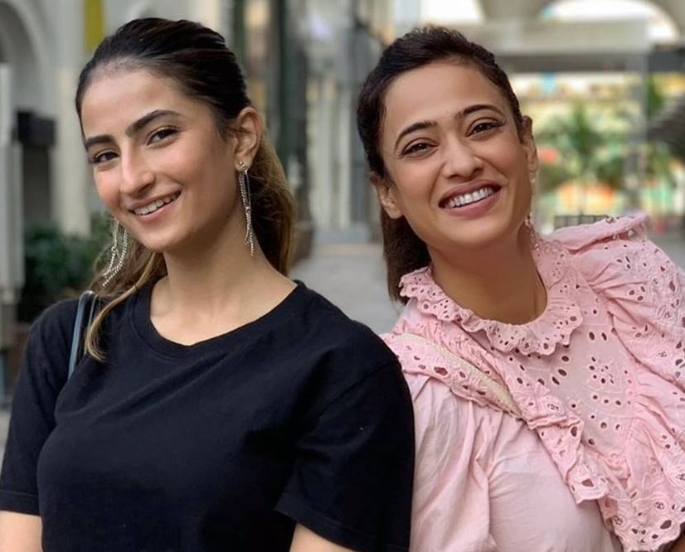 Shweta then issued a message for Palak, telling her to fight her battles on her own otherwise people will not believe her.

“I just want to tell my daughter, I am always with you, but you need to fight your own battles.

“I may not always be around to be your shield, but I hope my experiences and right actions become a guiding light in your life, where you find the strength and integrity to face any situation.

“Unless you fight for yourself, people will not believe you.”

Shweta Tiwari was married to Raja Chaudhary until 2007 due to a domestic violence incident.

She later got married to Abhinav Kohli, however, their marriage reportedly deteriorated. In 2019, a police complaint was allegedly filed after Abinhav allegedly hit Palak in a fit of rage.

Shweta Tiwari had previously called her children the biggest reason for her positivity.

She had said: “I wait for the good day to come and keep moving with a smile on my face.

“Secondly, my kids are the biggest reason for this positivity. When they see me sad, they get affected and become sad and get scared, so I try to be happy in front of them and pretend at times that I am unaffected by all that is happening around me.

“When my kids look at me, they think there is nothing in the world that my mother cannot handle and they are happy when they see me happy.

“That, for me, is my biggest motivation.”

Dhiren is a journalism graduate with a passion for gaming, watching films and sports. He also enjoys cooking from time to time. His motto is to “Live life one day at a time.”
Naga Munchetty ‘played down’ Asian Heritage to Fit In
Ranbir Kapoor tests Positive for Covid-19