Naga Munchetty ‘played down’ Asian Heritage to Fit In

TV presenter Naga Munchetty has revealed that she played down her Asian heritage as a child in an attempt to fit in.

"The sense of shame was overwhelming."

TV presenter Naga Munchetty has opened up about trying to hide her Asian heritage in the past in order to fit in.

The BBC Breakfast host has admitted that, when she was younger, she tried to distance herself from her Asian background.

Talking to the BBC, Munchetty discussed her first encounter with racism as a seven-year-old.

Now 46 years old, she has revealed that the experience has stuck with her ever since.

“I know what it’s like to hide parts of my whole self, to play down my Asian heritage – it’s difficult to acknowledge that I’ve done it, and it’s hard to admit.

“Since I was young, I felt I needed to, so that I fitted-in more easily.”

Munchetty then went into detail about her first encounter with racism as a young girl.

“You never forget the first time you hear that painful and distressing word.

“I was seven, when someone I thought was a friend at school, told me we could no longer hang out.

“They used the p-word, making clear the reason was because of the colour of my skin. The sense of shame was overwhelming.

“I was told I didn’t belong when up until then I assumed I did. From that moment I knew I was seen as different. That first hurt never goes away.”

Naga Munchetty also went on to say that she remembers going to various lengths to hide her home life from her classmates. She said:

“I remember being paranoid about smelling of the curries my mum cooked when I was at school.” 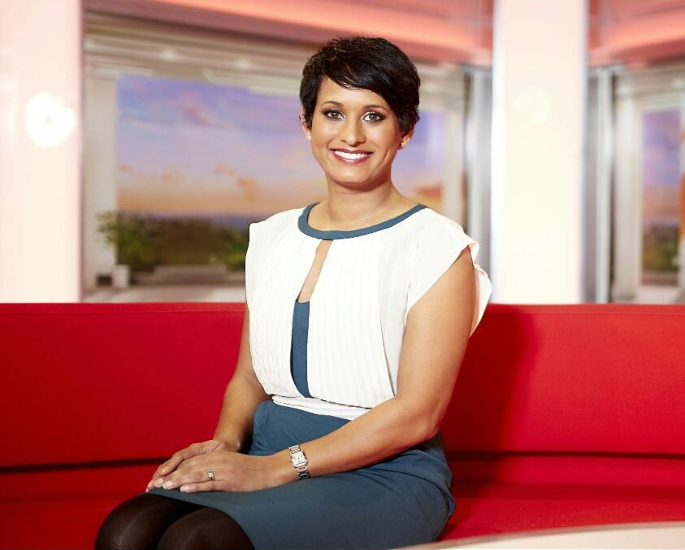 Naga Munchetty revealed that her parents also experienced racism while living in the UK.

“I grew up in South London. My dad was from Mauritius and my mum was from India. Both were nurses.

“They too received racial insults at work, including the p-word.”

Naga Munchetty has also been the target of online racism from viewers since becoming a frequent face on BBC Breakfast.

While speaking of the racial and sexist abuse she has received on Twitter, she said that she accepts criticism as part of her role in the public eye.

However, Munchetty is not afraid to call out those who abuse her.

Previous tweets about the presenter accuse her of only being an employee at the BBC due to her ethnicity.

Online abusers have also criticised her hair and glasses, as well as making sexual remarks.

“I’m on telly, I’m in your home, so if you want to criticise me, fine.

“You don’t abuse someone while they’re doing their job, and you don’t make racist, sexist or bigoted comments.

“If someone says, “She did a bad job of that interview, I’ve come away and not understood anything”, I would go back and re-examine that interview.

“Racist and sexist stuff, I just think, “You’re an idiot”.”

Naga Munchetty joined BBC Breakfast in 2009, and became a main presenter in 2014.

She is currently is the second longest-serving member of the BBC Breakfast team.