Is Sexism a Problem for British Asian Society?

Sexism is prejudice, stereotyping, or discrimination, typically against women. DESIblitz explores if sexism is a problem in British Asian society is or not.

“Even nowadays, having a son over a daughter is seemed a blessing”

It has been said that sexism is ‘more widespread’ in the UK than in any other country, but how sexist are British Asians?

Sexism is more likely to happen to females and it is no different in British Asian society. If anything, it will be greater than most Western counterparts.

The family name, the family honour and the family reputation are often a more serious responsibility for a daughter, than as son.

The double standards in Asian society are prevalently related to gender differences and how a girl is treated versus a boy in a family.

For instance, if a son spends a lot of time out late, smokes, drinks or or even sleeps around, he won’t always be given a hard time over it. But if daughter does any of these things, she may be viewed as being disrespectful and discourteous.

British Asian women can be confined to a space where they are only allowed to be approved adjectives such as passive and compliant.

If a woman over steps these guidelines, then it’s likely she will not get supported in her views or opinions. Unless she is head-strong and willing to go against the grain, but even then it is not easy as it is for a British Asian man.

Conversely, sexism also happens to males too. But in British Asian society, due to its male dominant nature, males are less likely to experience sexism in the same way women do.

In an orthodox household, sexism doesn’t have any meaning; the concept probably doesn’t even exist to them.

Treating someone differently because of their sex is deeply rooted in British Asian society. It is reflective of the way women are treated in homelands.

Gurpreet Singh thinks that: “British Asians still have the medieval mentality, where a woman is deemed to certain limits compared to men.”

For many modern and newer generations of British Asians, sexism is fading away, due to new family structures e.g. no extended family, no criticism as to how they live their life etc.

However, there are still a lot of British Asian households holding onto exhausted gender stereotypes and refuse to let go of patriarchal views. Either they haven’t been educated on the matter or simply not willing to change their views.

To these people, a woman shouldn’t do anything more than cook, clean, look after the family and a man should be the head of the household and provide.

But these subservient roles are often reversed today.

Not just in British Asian households, but also generally. Men aren’t strangers to cooking for the family or cleaning the house and taking care of the children. Many women work alongside their partners and some can even be the sole breadwinners in the house.

And this is positive; people might be able to reach their full potential when they aren’t chained to gender stereotypes. 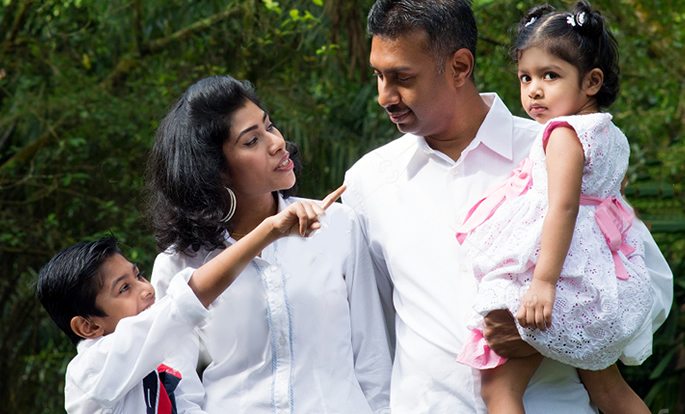 Although sons and daughters shouldn’t be differentiated, it’s an age old belief that a son is more auspicious than a daughter. And unfortunately, that belief is still
valued today in South Asian culture.

“Even nowadays, having a son over a daughter is seemed a blessing,” says Gurpreet.

A son would carry on the family name and he would look after his parents when they are old, while a daughter only stays in her parents’ house temporarily because she is one day expected to marry and leave to go to her marital home.

Does this make a daughter a burden?

Today, there are many cases where British Asian daughters are more caring towards their parents than sons. The ideology that sons are more important than daughters can only be overcome by acknowledging the problem instead of saying “put up with it” or “this is just the way it is”.

It doesn’t have to be this way. The older generation is less likely to change their mindset because they are stuck in the past but it is vital to teach newer generations that equality can happen if we let it.

A Girl Can’t Venture Too Far Away

Some families are still reluctant to let their daughters move away for university or live in a different city for work.

There is usually huge anxiety from these parents which is often translated into making the girl feel guilt for wanting to leave home. Or simply, she is told “You are not going. And that is final.”

So what happens if she wants to go further and say, travel to different countries on her own?

“My male cousin travels to Japan, Spain and Iceland without so much as the bat of an eyelid but when my sister wants to go to Wales for a few days, she is prevented from going.”

Safety might be a concern but is that really the reason that British Asian girls are hindered from going away by themselves? Or is it a lack of trust?

Maybe it all comes back to the idea that the honour of a family is in the daughter’s hands. They might think that by giving a girl so much freedom, she might do something that could taint the family name.

But some parents spend so much time making sure their daughters don’t do anything ‘shameful’ in the eyes of society, that they forget how to raise their sons with the same principles.

Giving a girl more freedom and more independence shouldn’t be seen in a bad light, instead, it should be seen as a way of helping her to find herself and helping her to grow as a person, who will contribute to society.

With the passing of each generation, sexism is ebbing away and it is not as bad as it once was.

Model Neelam Gill, actress and singer Jasmin Walia and British Asian female MPs are amongst the many individuals who have displayed success. Additionally, people such as Malala continue to inspire not only British Asian girls but girls all across the world.

Jez Kaur Dhillon also known as Hipster Veggie on YouTube hails from Punjabi migrants who moved to London in the 70s and 80s and had 3 daughters:

“I’ve always been treated great by my family. I’ve never been made to believe I’m limited because I’m a girl. In fact, my mum and dad have always made it so apparent how powerful we are because we are women.

My dad gave us the tools to go out, work and earn an honest living. My mum showed us how to hold it down as a female in a house, how to run things and how to be the back bone of a family”

Sexism is a learned behaviour and therefore, it can be discouraged in British Asian society. Maybe this discouragement can begin in the home. If families were to sit down and talk about equality, then perhaps the outdated patriarchal views could be eradicated.

It is important to embrace equality in order to improve the lives of those people, especially, women, who may be suffering in silence with daily prejudice. Especially, if from within the family or from the British Asian society at large.

Koumal describes herself as a weirdo with a wild soul. She loves writing, creativity, cereal and adventures. Her motto is "There is a fountain inside you, don't walk around with an empty bucket."

Should Asians talk about Sex with their Parents?
Is Marrying a Virgin still a Desire?