YouTubers Sham Idrees and his wife Froggy were attacked by a mob in Karachi. The incident resulted in Froggy being punched in the face.

"I have never seen anything like this. Child and woman abuse needs to stop."

Pakistani-Canadian YouTubers Sham Idrees and his wife Queen Froggy were at a meet and greet session when they were attacked.

The incident took place on Sunday, May 5, 2019, at the Ocean Mall in Karachi.

The mob had pushed and shoved Sham outside the shopping mall and someone from the crowd even punched Froggy in the face.

Sham posted: “I’m sorry to all the fans, especially the kids who were pushed around and got hurt at the meet and greet.

“An individual attacked my wife and this is heartbreaking. Hurting women and children is what we’ve come down to? We will explain everything in detail shortly.”

Froggy wrote on Instagram: “I’m sorry to all my fans who were not able to take photos, who were pushed, who were hurt and who were abused.

“I have never seen anything like this. Child and woman abuse needs to stop.”

Following the attack on his wife, Sham was enraged by the mob and had to be held back by security. 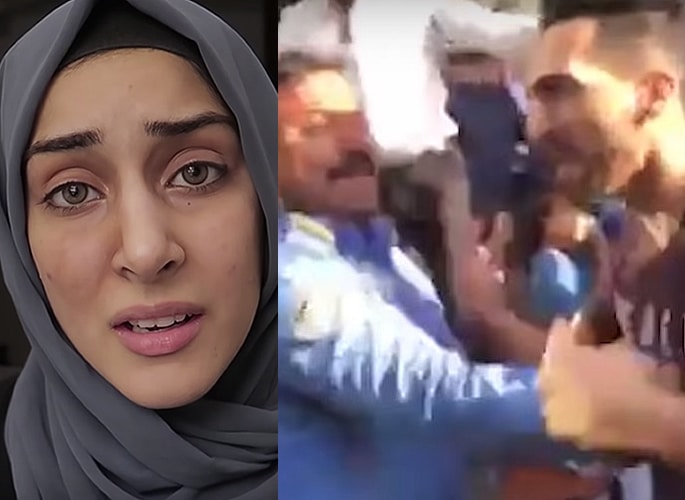 According to the couple, it was an organised attack and that the mob were fans of fellow Pakistani YouTuber Ducky Bhai.

Sham and Ducky are not on friendly terms and it was rumoured the mob was instigated by Ducky.

Froggy explained the attack on her YouTube channel. She also added a few clips of the incident where some people were heard chanting Ducky’s name.

“I have no choice but to come out in public and share what happened.

“I didn’t expect Saad or his fellow YouTubers to spread such hate on social media to a point where people want to go out in public and hurt a woman.

“This time it wasn’t about attacking Sham. This time I was punched in the face by a Ducky fan and I’m asking for your help.

“Screaming someone’s name, being their fan is a norm. But going out of your way to hurt someone’s wife, daughter, sister are only something those who don’t respect their own moms and sisters do.”

See the video by Froggy

Froggy claimed that Ducky was behind the attack but he firmly denied organising the attack and condemned it.

Just heard about the assault on Froggy at Sham's meet & greet today. This type of disgusting behavior should never be tolerated at any cost, especially on a woman. Fans should enjoy the occasion by staying in their limits. This is not what I or any other YouTuber encourage to do.

Many other social media users also came forward to condemn the attack on the YouTube couple.

One person said that even though they do not like their content, they are supporting them because “abuse is not acceptable in any condition”.

YouTuber Zaid Ali, who is friends with Sham and Ducky, spoke about the matter:

“I’m extremely disappointed by the act of assault on Froggy. No one should be dehumanised to the extent where violence against them is acceptable.

“Behaviour like this is not promoted under any circumstance. You can voice your disagreement with words but please don’t resort to violence.”

Dhiren is a journalism graduate with a passion for gaming, watching films and sports. He also enjoys cooking from time to time. His motto is to “Live life one day at a time.”
10 Best Desi Hacks & Tricks for the Home
Best Smartphones to Buy for Mobile Gaming