"Cricket and music have been inseparable"

The album has six songs altogether, mostly from new artists.

On the release of the album, PSL tweeted:

“Of all the languages spoken in Pakistan, one of the most important ones is music itself.

“These are the taranay to set the mood and tone for this season. We hope they are the soundtrack to your season.”

When the PSL anthem, ‘Groove Mera’, released earlier in February 2021, fans had mixed feelings and reminisced about the older versions.

Despite gaining millions of views and trending on YouTube, it received a fair amount of criticism.

Some debates on social media were so intense that celebrities intervened and defended the creators and singers.

‘Groove Mera’ was performed at the PSL opening ceremony alongside the entertainers, Imran Khan and Atif Aslam.

Pakistani cricket lovers now have a range of songs they can listen to and groove over.

The curator of the album, Natasha Noorani, tweeted:

“Cricket and music have been inseparable for me growing up and I’m thrilled to have played a part in curating the sound of cricket in my lifetime.”

From pop music to hip hop, rap to traditional, the album has an element for every ear.

Lyari Underground sung ‘Laibo’, which has lyrics in multiple languages including Balochi, English and Urdu.

Talal Qureshi kicked it off with ‘6ixer’, a number that leaves the listener cheering.

Reactions from fans have started coming in and appreciation has been recorded so far.

‘Laibo’ and ‘Sixer’ are two songs that have stood out by far.

Whether the songs in the album are as good as those from the previous years, we are yet to find out.

Cricket is the most loved sports in Pakistan. Anything and everything that relates to the sport is welcomed by the masses.

With the PSL currently taking place in the country, the album is expected to be the talk alongside the match excitement. 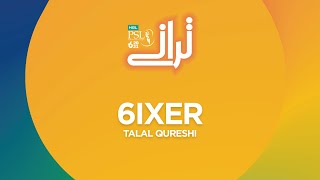 Nadia is a Mass Communication graduate. She loves reading and lives by the motto: "No expectations, no disappointments."
Justice: Sharad Dipesh Diyali & The God of Small Strings
Delhi University training Singapore students in Indian art forms