Priyanka Chopra attended the 2021 Billboard Music Awards with Nick Jonas and she stunned in a semi-sheer gown with a plunging neckline.

She added some bling to her gown

Priyanka Chopra wowed on the red carpet at the 2021 Billboard Music Awards.

The actress attended the awards ceremony with her husband Nick Jonas, who played host for the evening.

While the likes of The Weeknd and BTS won big prizes, Priyanka made sure all eyes were on her with her stunning outfit.

She was dressed in a semi-sheer gold gown from Dolce and Gabbana, complete with intricate embellishments. 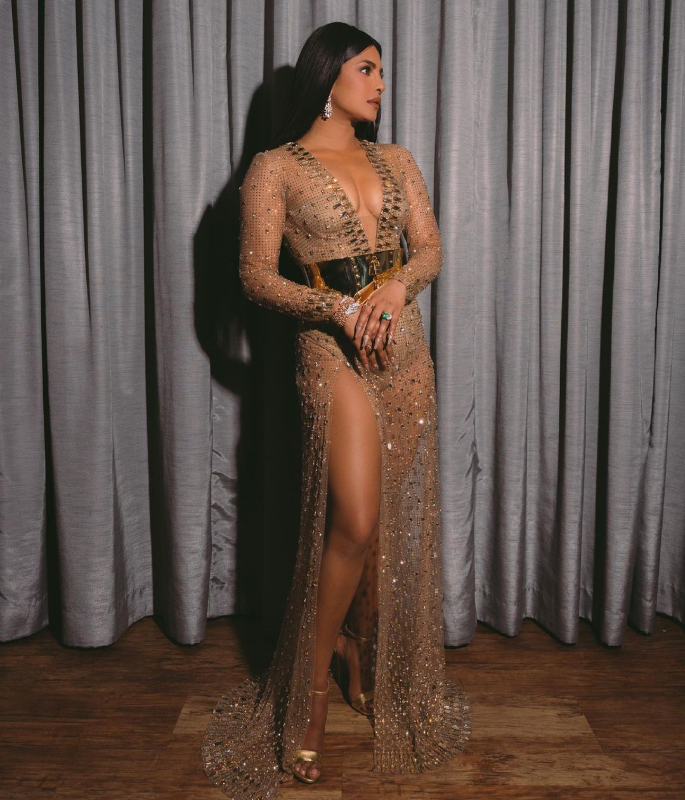 She added some bling to her gown with an iconic gold belt from Dolce and Gabbana couture.

Priyanka paired her outfit with diamond accessories from Bulgari. She wore diamond danglers and a signature serpent necklace.

Her divine look was completed with gold heels, shimmery makeup and a sleek hairdo.

Meanwhile, Nick Jonas could not take his eyes off his wife as the pair posed for the cameras.

Nick looked dapper in an all-green outfit from Fendi.

He sported a green chained shirt and a green shirt with a massive collar. They were paired with green high-waist trousers and black loafers.

Nick opted for light stubble and had his hair in a neat quiff.

Priyanka Chopra clearly loved her husband’s look as she captioned a picture of him with a drooling emoji. 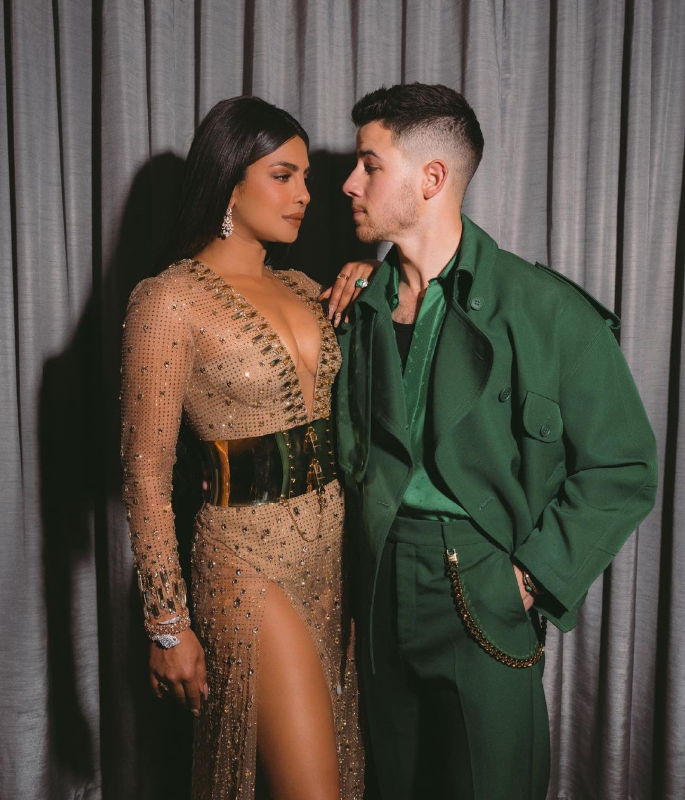 In addition to hosting the awards, Nick Jonas also performed with his brothers and Marshmello for the Jonas Brothers’ single ‘Leave Before You Love Me’.

Nick Jonas did not fail to impress, despite the fact that he has been recovering from a rib injury.

The musician was involved in a bike accident, suffering a “cracked rib” and “a few other bumps and bruises”.

However, it did not stop him from carrying on with work, returning to the singing reality show The Voice.

“Husband Appreciation Post. Not even a cracked rib can stop this force of nature.”

“So proud of you baby. With everything you do! Your work ethic, your pursuit of excellence!

“You inspire me everyday! Crushed it today! I love you!”

Shortly after, Nick Jonas posted a message of appreciation for his wife, writing:

“I started this last week by taking a brutal tumble on a bike fracturing my rib and ended it hosting the Billboard Music Awards with my incredible wife by my side who helped me every step of the way to recover and feel my best.

Dhiren is a journalism graduate with a passion for gaming, watching films and sports. He also enjoys cooking from time to time. His motto is to “Live life one day at a time.”
Malaika Arora stuns in Sparkling Sequined Sari
Indian Fashion Influencers changing the Face of Fashion