Parents beat Indian Daughter for Not Going to Husband

An Indian daughter from Madhya Pradesh was brutally assaulted by her parents after she refused to go back to her husband.

the victim is seen lying on the floor screaming in pain

An Indian daughter was subjected to a horrific ordeal in which she was beaten. The incident happened in Bhil Tilwara of Nalchha, Madhya Pradesh.

The woman was assaulted by her parents who used sticks to carry out the attack.

It was reported that the unnamed victim was beaten after she refused to go to her husband.

While the woman was attacked by her parents, they also enlisted the help of some locals.

The police eventually came to know about the attack and subsequently registered a case.

According to the police, the woman went to her husband’s house in Gujarat to ask for some money.

She stayed there for a few days but returned to her maternal home after he refused to give her money.

At her home, the parents told her to return to her husband, however, she was not willing to go back.

This angered the family members. Her father Pratap, mother Jatanbai and uncle Bhootiya dragged the Indian daughter out of the house and began beating her with sticks.

The incident led to locals gathering round. When the relatives explained their reason for beating the woman, some of them joined in.

Some locals filmed the incident. In the video, the victim is seen lying on the floor screaming in pain while a man and woman beat her with sticks.

Two other men are then seen holding the victim up whilst hitting her with sticks.

They then drag the woman down to the ground and hold her there as another man runs up and swings a stick across her back, leaving her screaming. 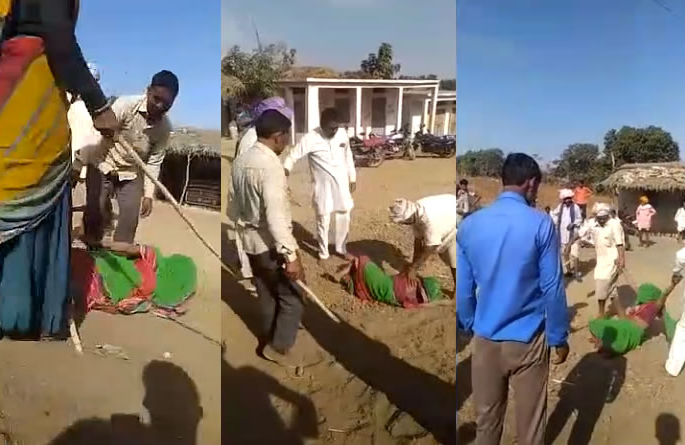 Superintendent Aditya Pratap Singh explained what had happened as well as the events leading up to the attack.

He went on to say that one of the accused is a village leader. So far, three people have been arrested and were taken into custody for questioning, however, the investigation continues to identify the other suspects in the video.

In some villages in India, some carry out their own punishments, some more severe than others.

In one case, a married woman from the village of Siloli, Madhya Pradesh, was beaten after she was caught by her family with another man.

The family caught her having sex with her lover. Both were then dragged outside the house.

The man was tied to a tree and beaten while the woman was punched and kicked. One person even stomped on her as she laid on the ground.

One family member used a belt to whip the lover and also slapped him.

Police were informed about the incident and launched an investigation.

The family was eventually convinced to stop, however, the filed a complaint against the young man and officers arrested him.

Dhiren is a journalism graduate with a passion for gaming, watching films and sports. He also enjoys cooking from time to time. His motto is to “Live life one day at a time.”
Indian Father of Rape Victim Shot by Gunmen
Pakistani Wife Beats Husband at his Third Wedding