A man has been arrested for allegedly murdering 16-year-old Ramsha Wassan. It is a case of honour killing after she wanted to marry a boy of her choice.

"he will convince her to change her mind".

Zulfiqar Wassan, also known as Zulfo, of Khairpur, was arrested on Wednesday, February 6, 2019, for killing a teenage girl.

He, along with other accomplices, had allegedly kidnapped Ramsha Wassan, aged 16, before murdering her on Friday, February 1, 2019.

According to Khairpur police, Zulfo is said to be a relative of Pakistan Peoples Party (PPP) leaders Manzoor Wassan and Nawab Wassan.

The suspect is involved in over 20 cases of kidnappings, robberies and murders.

Ramsha, who came from a poor family in Haji Nawab Wassan Village, was kidnapped by Zulfo. He later killed her as she wanted to marry a boy from another village.

Zulfo allegedly surrendered to police because of pressure on PPP leadership by the civil society, human rights activists.

Sindh political parties protested about the incident and demanded action against the culprits involved. Police registered the case as an incident of honour killing.

Organisations have called it a “cold-blooded murder” as the suspect does not have any relation with the family.

They were reportedly motivated by the desire to establish their “terror” and enforcing the rules of the village that no girl can marry under her free-will.

Zulfo kidnapped the girl on January 19, 2019, after he came to know about the girl’s relationship with the boy. Zulfo said to Ramsha that “he will convince her to change her mind”.

Ramsha’s parents, who were servants of the Wassan family, pleaded Manzoor for the release of their daughter from Zulfo’s custody. 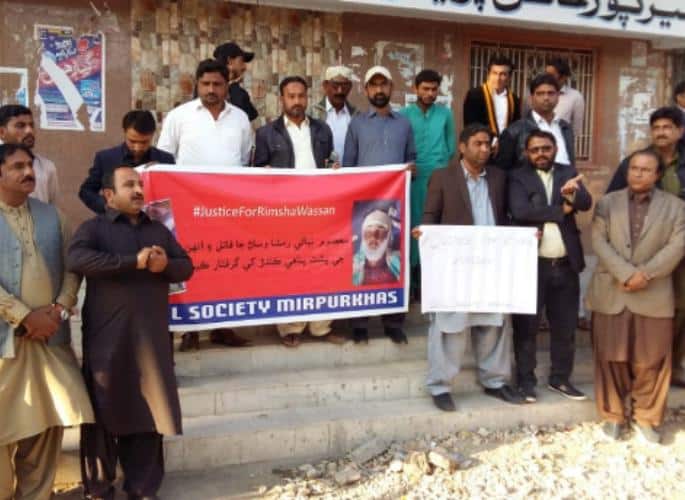 Ramsha was released but insisted on marrying the boy. Reportedly, Zulfo dragged her in front of her mother and shot her dead “to teach her a lesson”.

A police official said: “It is not clear whether he acted on his will, or that someone else had ordered him to. Police are investigating this angle of the case too.”

Manzoor and his family condemned the incident, calling Ramsha “innocent” and a “martyr”. They disowned Zulfo and have distanced themselves from the case.

However, sources have stated that Zulfo was very close to Manzoor. The PPP leader said that media and politicians linked his family with the murder.

Manzoor said: “The girl had left her home a few days ago and wanted to marry Izhar Wassan, a boy from nearby village.”

He explained that the girl left the house and went to marry him.

“We and the girl’s family approached Izhar’s parents and returned Ramsha. But, suddenly this incident occurred.”

Manzoor reiterated that Zulfo killed Ramsha but was not involved in her kidnapping.

The girl’s mother initially protested about the murder, but it soon stopped. They even refused to file a case of their daughter.

However, the police registered an FIR of honour killing.

Khairpur SSP Umer Tufail said: “Our initial probe revealed that the victim was murdered in the name of honour.”

He also stated that Zulfo has committed three honour killings and is a symbol of terror in the area.

Tufail added: “Zulfo is also involved in heinous crime for the last 25 years and is accused in more than 20 cases.”

The FIR was registered on behalf of the state in order to avoid pressure on the victim’s family and threats posed them for withdrawing the case.

A team under the supervision of ASP Dr M Imran Khan are collecting ground information and analysing technical data.

They are also gathering intelligence and conducting raids to get enough evidence to arrest the suspects involved in this honour killing case.

Dhiren is a journalism graduate with a passion for gaming, watching films and sports. He also enjoys cooking from time to time. His motto is to “Live life one day at a time.”
Three Indian Men caught in Leicester Factory face Deportation
Drunk Driver used Fake Police ID to get McDonald’s Discount