Drunk driver Vinod Patel was fined for impersonating a police officer and using the ID to get a discounted McDonald’s meal in Wembley Park.

Vinod Patel, aged 49, of Westfield Gardens, Harrow, escaped a jail sentence for impersonating a police officer. He was fined more than £1,100 at Willesden Magistrates’ Court for the crime.

Police gave a brief chase to Patel before his vehicle stopped. Officers found him to be over the legal alcohol limit whilst driving.

The incident happened during the evening of November 25, 2018, where he was driving a black Mercedes. He drove to a McDonald’s restaurant near Wembley Stadium where he had used the police ID to get a discount on his meal.

As he was about to drive off from the fast-food restaurant, the court heard that Patel was stopped by passing police officers. They approached Patel’s vehicle to advise him to use his mirrors.

He then showed them the same fake police ID card before reversing towards them at speed and driving off from the Stadium Retail Park.

Police gave chase to the blacked-out Mercedes and they managed to stop him on Bridge Street in Wembley.

Patel was breathalysed and was found to be over the legal limit for alcohol whilst driving. 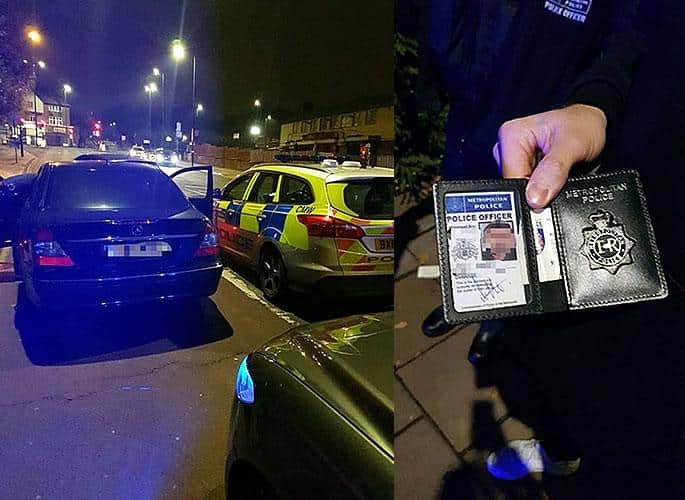 Officers searched Patel’s car and found a receipt from McDonald’s. It showed he had used the police ID to claim a discount on his fast food bill.

Police spotted that the ID card was a fake and they arrested Patel.

In addition, the officers confiscated the ID card that Patel had been using.

The Harrow resident was charged with impersonating a police officer, drink driving and fraud.

At Willesden Magistrates’ Court, Patel admitted to the three charges against him in December 2018.

Patel received a fine of £1,159 and was disqualified from driving for 12 months. The police ID card which had been seized from Patel’s vehicle was destroyed.

In a similar incident, eight men were jailed in 2018 for pretending to be police officers and stealing £242,000.

The London-based men targeted 25 people across the UK and persuaded them to transfer large sums of cash while impersonating police officers.

Many of the victims were elderly and vulnerable. It was reported that the eight men were part of an organised crime group in London and they convinced the victims that their bank accounts had been compromised.

They were sentenced to a total of 31 years and five months in prison.

Dhiren is a journalism graduate with a passion for gaming, watching films and sports. He also enjoys cooking from time to time. His motto is to “Live life one day at a time.”
Pakistan’s 16-year-old Ramsha Wassan murdered in Honour Killing
Indian Man wants to Sue Parents for his Birth