Savjibhai Dholakia of Gujarat, India has spoiled and surprised his employees by giving away cars, jewellery and even apartments as Diwali gifts.

“I know what it is like to have needs. When a worker is happy he can do anything at all for you.”

Diwali is a special occasion where family and friends come together, eat hearty food and exchange Diwali gifts.

However, you will be hard pressed to find someone as generous as Indian boss, Savjibhai Dholakia, who has spent nearly £5 million on Diwali presents for his employees.

Dholakia also known affectionately as ‘Kaka’ (meaning child) is the CEO of Hari Krishna Exports, a well-known diamond company based in Surat, Gujarat.

To celebrate Diwali for 2014, the CEO has given 1,268 long serving employees cars, apartments and jewellery among other loyalty bonuses. 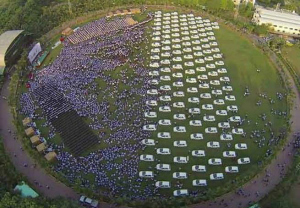 Speaking about the expensive presents bestowed upon his employees, the CEO said: “It’s a refund of sorts to those who have stayed with us, helped improve our products and grown with the Hari Krishna family. I am merely giving back.”

Dholakia reports saving £5 million for these gifts even before sales targets for the financial year were created.

This extraordinary loyalty scheme began in 2012 where three cars were given away to loyal workers, before rising up to 70 cars in 2013.

Dholakia believes that these incentives help keep his employees motivated: “We created the hunger among the employees – they work better, they take home better incentives,” Dholakia said.

One happy employee, Kanak Patel who is an Administrative assistant for the company and has been working at Hari Krishna Exports for over 10 years also mentioned other company perks and the relationship between employees and senior staff:

“We have gyms and family programmes; we have the freedom to meet the management with our suggestions. It’s like a family – I wouldn’t dream of leaving.” 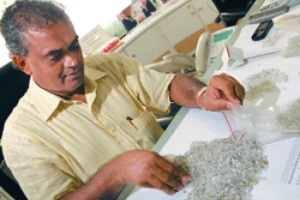 Dholakia is also aware of some of the financial hardships his employees may be going through, having experienced a rough childhood himself.

Dholakia notably dropped out of primary school and began to learn the art of diamond polishing from his uncle, eventually working his way up to founding and opening Hari Krishna Exports in 1991.

He expressed sympathy with his employees and some of the difficult circumstances they are in: “I know what it is like to have needs. When a worker is happy he can do anything at all for you.”

Dholakia has worked hard to ensure his employees are content at work, and has become somewhat of a trendsetter in Surat as a result.

In 2006, his company was the first in the city to have an on-site kitchen for almost 6,000 employees. It was also the first company to hand out helmets to employees who rode to work on motorbikes.

Not only this, Dholakia has also taken out insurance worth £100,000 on 280 employees who have worked with the company for over 10 years, and helps families carry out their religious practices by giving them the chance to go on annual pilgrimages, all paid for by the company.

With Diwali fast approaching and gift giving in full swing, it may be hard to out do Dholakia, but his kind act highlights nonetheless the generosity and care a person can have for others, something we can all learn from.

Amarjit is a 1st class English Language graduate who enjoys gaming, football, travelling and flexing his creative muscles writing comedy sketches and scripts. His motto is “It’s never too late to be who you might have been” by George Eliot.
Asian Achievers Awards 2014 Highlights
Smugglers hunted after £16m Heroin haul seized