"I love how she’s incorporated a modern twist to traditional accessories.”

As glasses are clinking, drinks are flowing, and a delicious assortment of samosas and cupcakes are being served, it is clear to see that a launch party is a celebration – one of hard work, drive and determination.

Already enjoying the success of her initial line of jewel and lace-encrusted sarees and anarkalis (Noreen Khan Couture), Noreen has now ventured into the ever-expanding world of accessories.

The launch party, held on May 17th, 2015, at the Bradford Court Business Centre in Birmingham was the destination for all keen fashionistas and fashion bloggers alike, as well as fans of Noreen Khan. 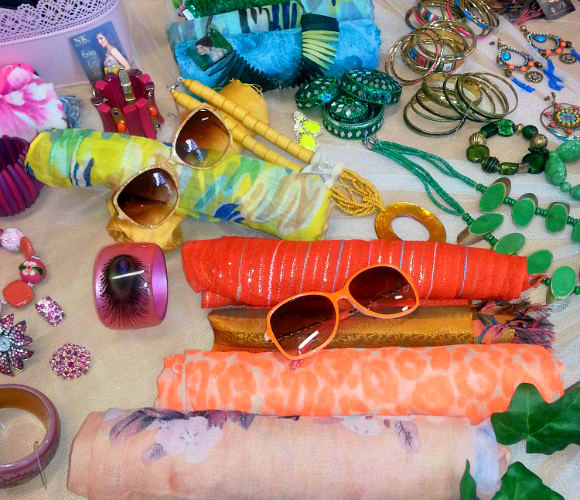 With accessories in every colour, ranging from bangles, earrings, necklaces, scarves and clutches, it is evident a lot of thought has been given to the everyday working woman and the trendy individual. Vibrant and affordable, her pieces range from £3.00 onwards.

Created in partnership with Birmingham-based bespoke designer, Gaby Manchanda, each piece is created impeccably with amazing quality and one would be crazy not to make a purchase.

It is clear to see that together, Noreen and Gaby are business savvy and fashion sassy individuals. With the success of their previous hit couture line safely stored in their back pocket, there is no doubt that this collection will also be a roaring success! 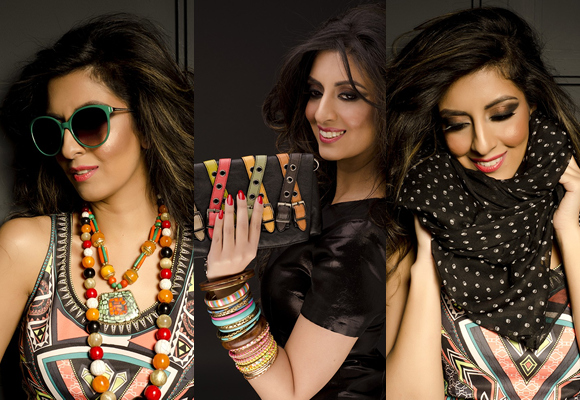 After asking several fans, it was clear that the clutches and wallets were a key favourite. One fashion blogger exclaimed:

“I love her clutches and they’re so affordable too! I love how she’s incorporated a modern twist to traditional accessories.”

Her clutch bags see a variety of belt straps and leather tassels, and her studded clutches definitely have a feel of Valentino, offering a high fashion chic element for the young Desi girl.

Noreen notably uses a traditional and contemporary approach in all her accessories, which offer a style that is suitable for any individual. 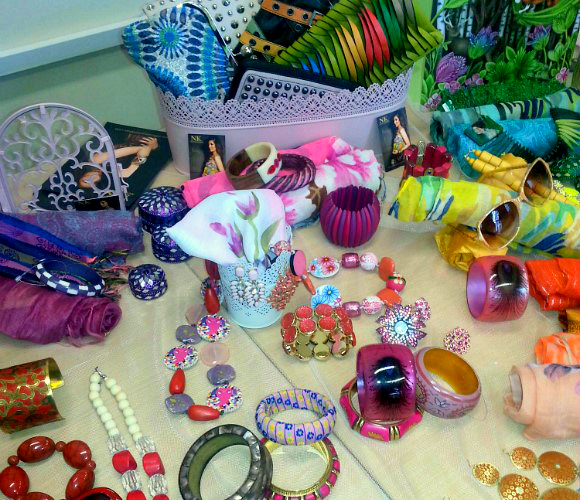 We saw her using the same inspiration in her Noreen Khan Couture line where she styled outfits that were perfect for every modern day woman.

It is also great to see her accessories are not just limited to Desi functions, but are versatile enough for any Western occasion, event or outing. And as Noreen exclusively tells DESIblitz, this is something that both her and Gaby were keen to encorporate.

When asked for the inspiration behind the accessories, Noreen said:

“I think we kind of started off with the clothes and it was a natural progression because we both love jewellery, and being women, we thought we’d start this venture together! Accessories are more accessible and reaches a wider audience.”

Speaking about her favourite items, Noreen continued: “The bags and there’s the bangles because they can be worn with anything!”

She added that the accessories can also be incorporated with the sarees and anarkalis which have also been designed with a western twist.

As Noreen is rapidly becoming a Desi household name, it only makes sense for this defiant and creative individual to delve into the world of fashion and accessories.

Her career as a popular BBC Asian Network radio presenter and host has allowed her to be involved with media, music and sports.

From this, Noreen has created a huge following, not only for her bubbly and inviting demeanour but also due to her innovative ideas and fashionable style.

For the launch party, Noreen sported a colourful jumpsuit showcasing her fun and bold side. While a striking contrast to her traditional sarees from her previous line that were displayed alongside her, it was clear that all eyes were on her.

Noreen’s website is now live for you purchase any of her colourful accessories, so make sure to have a look and see if anything is up your street!

What is more, both Gaby and Noreen have hinted that another line is in the pipeline, and more is yet to come from this designer duo! Go on to Official Noreen Khan to shop the exquisite NK Accessories collection now.

Sakinah is an English and Law graduate who is a self-proclaimed beauty expert. She will provide you with tips to bring out your outer and inner beauty. Her motto: “Live and let live.”
Best Dressed at Cannes Film Festival 2015
Akshay Kumar to launch AK Clothing Line