Games consoles are very popular but there are custom gaming consoles which are very expensive and make for a collector’s item.

Gaming consoles are extremely popular, however, some people go the extra mile for a unique experience and that includes having custom gaming consoles.

They are a growing trend, with modders and designers giving standard consoles a unique touch.

But in many cases, the most sought-after ones tend to be limited edition and expensive, thanks to the special design.

As a result, many wealthy collectors pick up such consoles and keep as a rare possession.

While some custom gaming consoles were made as luxury items, others were to mark a special event.

Here are seven of the most expensive custom gaming consoles as well as their features which justify their high prices. 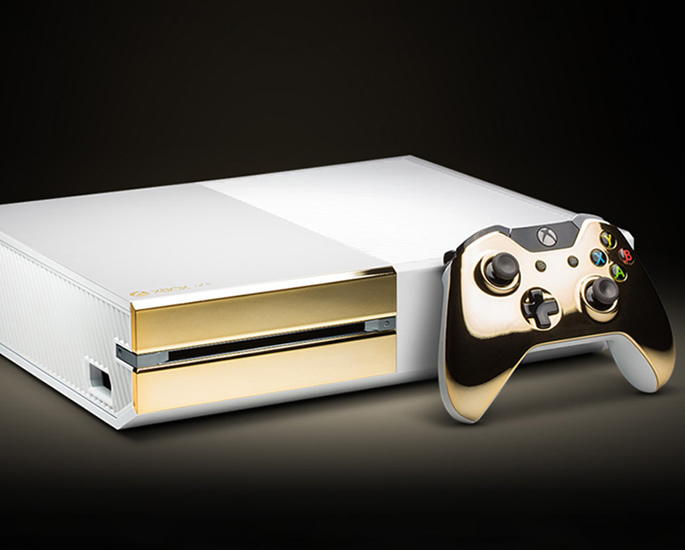 This limited-edition Xbox One received a classy touch from ColorWare. The design company debuted the console after they released a 24K gold Xbox One controller that same year.

ColorWare made 50 of the extravagant console, with 24K gold an added touch among the glossy pearl finish.

The stunning design makes it a console to keep as a collector’s item rather than actually using it to play video games on. It is also very expensive.

At the time of release, it was selling for $1,200 but since ColorWare does not plan on making any more, this is a rare collector’s item.

It is safe to say that if one is for sale, it will be much more expensive than before, especially if it is in perfect condition. 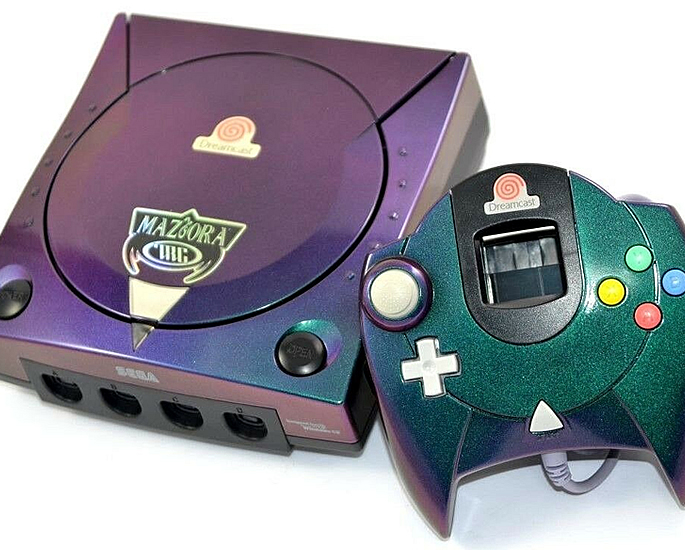 The Maziora Dreamcast was one of the more unique incarnations.

Maziora specialises in colour-changing products, known as ChromaFlair, and they designed the console. It starts off as shiny green but in a different light, the colour changes to purple, pink and blue.

It is not known why a paint product and video games need to be together but this collaboration, as well as others, tend to be valued by collectors.

In addition to the console and controller, this Dreamcast came with other Maziora things, including a “dream passport” CD, a helmet-shaped keyring, a sticker and a pamphlet about motorsports.

The console was originally released in 1999. Not only were just 500 made but they were only available in Japan, meaning they are very hard to come by.

For those wanting the vintage console, prepared to pay up to $4,500 on eBay for one. 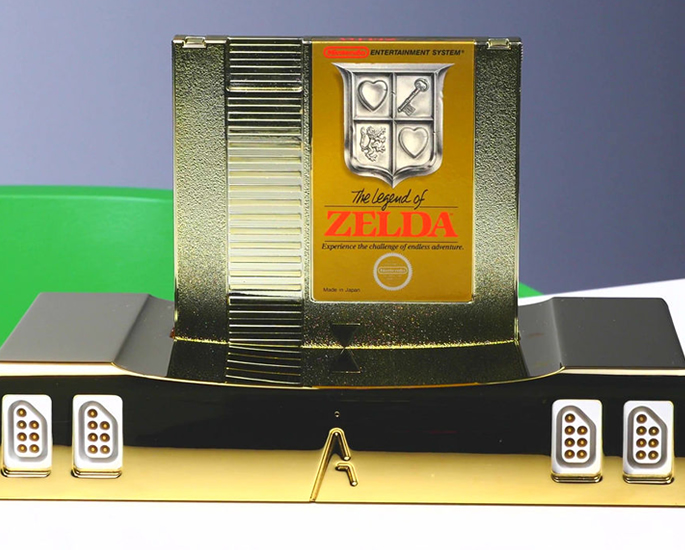 It received the custom treatment in 2016 when a 24K gold and hand-polished NT was created to mark the 30th anniversary of The Legend of Zelda.

In addition, a gold-coloured The Legend of Zelda games cartridge was also created.

However, only 10 were created and were given to gamers who were lucky enough to have made a reservation via email.

This makes the NT a showpiece for collectors who want to show off as there is a choice of 2,000 different games.

But it is far more expensive than the $500 standard version. The gold one was sold for $5,000 and it is likely that they are worth much more now. 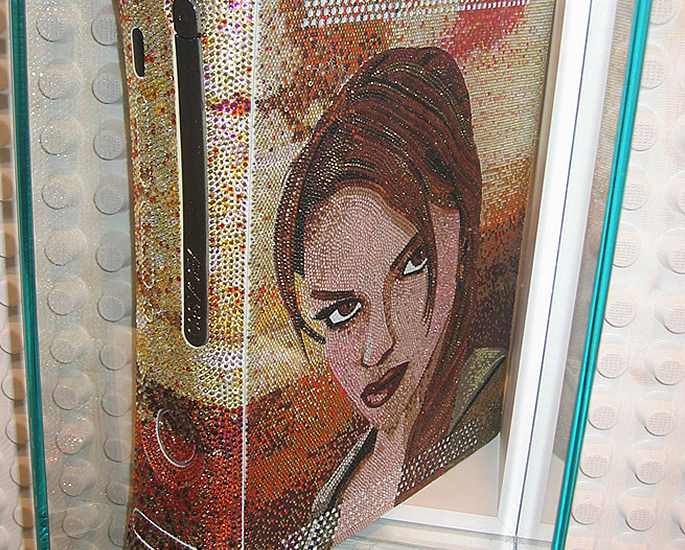 Fans of the Tomb Raider gaming franchise would be excited to have a limited-edition Xbox 360 with the protagonist’s face on it.

However, the face has been made from 43,000 crystals and only a handful were made.

This tribute to Lara Croft came from Germany and thousands of colourful crystals were intricately placed on the console to recreate Lara’s likeness from the popular video game franchise.

From a distance, it looks like it has been hand-painted but up close, every crystal can be seen on all sides of the Xbox 360.

It may be a rare and expensive custom gaming console but Lara Croft fans who have the money may be enticed to buy one, providing that they can find one for sale first. 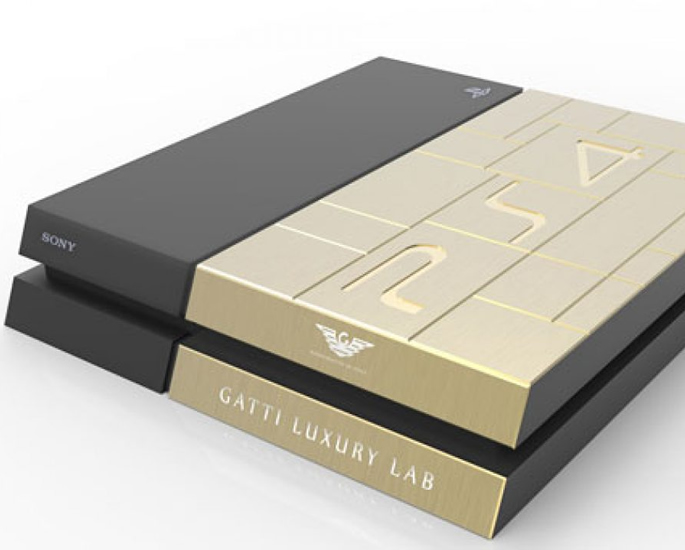 Italian jeweller Gatti Luxury Lab were responsible for this custom PlayStation 4 (PS4) and they also redesigned the Xbox One with their signature touch.

In 2014, Marco Gatti stated that the consoles were solid gold, not just plated and that they were just as functional as a regular console.

Each luxury console featured a geometric pattern etched on top with the console’s logo.

They were debuted at the Games14 convention in the Middle East that same year. Retailer Jumbo Electronics had said:

“Available to both Xbox and PS4 fans, the high-end materials and exquisite detailing of the gold consoles make it a great collectable item for gamers who love luxury.”

It certainly was not cheap though, selling at the convention for $13,700 each. 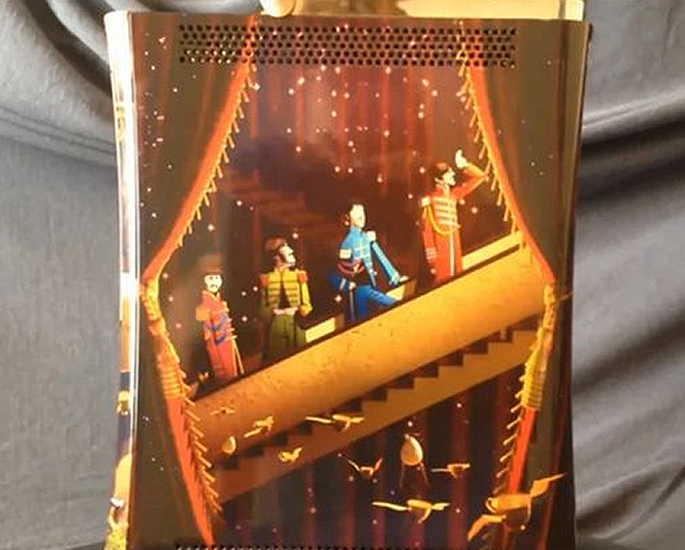 This hand-painted Xbox 360 has the roles of being a fully-functional games console and a piece of art.

It has a brightly-coloured design of the ever-popular Beatles. More specifically, the artwork depicts a scene from the introduction to The Beatles: Rock Band (2009) and it covers the entire console.

It was a one of a kind console, meaning it was extremely rare but it was for a good cause as it was used to raise money for charity.

In addition, players who downloaded the ‘All You Need is Love’ DLC were automatically entered into a contest to win one of the consoles. 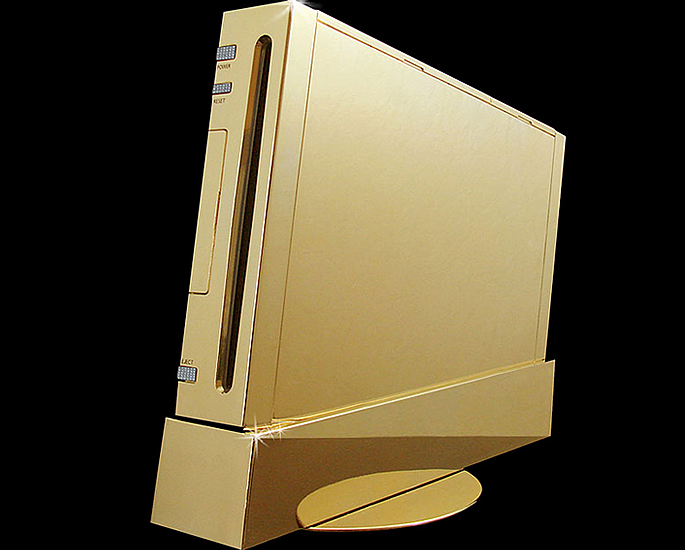 In what is the most expensive custom console, the Nintendo Wii Supreme was created by luxury tech designer Stuart Hughes in 2009.

Stuart Hughes is based in the UK and specialises in designing unique technology items such as iPhones and iPad, typically made with gold.

The Nintendo Wii Supreme is one of their most expensive projects for sale, costing $330,000.

That is because it is made with 2.5 kilograms of solid 22K gold, it is not painted or plated gold.

On top of that, 19K diamonds make up the buttons on the console and the matching remote.

According to the Stuart Hughes website, it took “six months of precise workmanship” to create the “ultimate gaming station”.

Not only is it very expensive but it is also very limited, with just three made.

The Wii may not have aged well in 2020 but this gold version would be something that appeals to most gamers.

These custom gaming consoles are truly one of a kind but their unique design makes them more of a collector’s item rather than something to play video games.

While some use expensive materials, others have been used to raise money for a good cause.

Nevertheless, all are expensive and rare, making them a unique possession for the lucky owner.

Dhiren is a journalism graduate with a passion for gaming, watching films and sports. He also enjoys cooking from time to time. His motto is to “Live life one day at a time.”
WhatsApp’s Disappearing Messages Feature goes Live in India
Instagram’s ‘Live Rooms’ Allows 3 More People to Stream Live