There are PCs which come with a hefty price depending on the hardware and software. Here are five amazing ones which cost over £10,000.

It has also been called an "unparalleled level of craftsmanship"

For many, a fast-processing PC which is budget-friendly is the ideal combination. However, there are some PCs which come with a hefty cost.

These PCs have been made using premium hardware from top manufacturers to ensure exceptional performance.

In many cases, individuals want PCs which have been customised to their specifications and cater to their needs.

As a result of adding more RAM, storage and cooling systems, these PCs can go for well over £10,000.

Here are five amazing PCs which cost over £10,000 and their technical specifications. 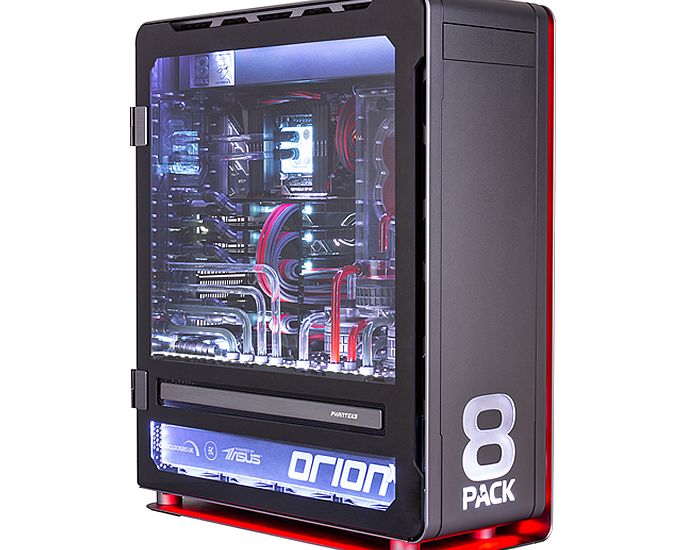 When it comes to gaming PCs, they do not come cheap and the 8Pack OrionX2 is at the top of the heap.

Costing around £30,000, this PC costs a lot but you get a lot with it to ensure seamless gaming.

The OrionX2 is actually two PCs in one, using an E-ATX Primary System and a MINI-ITX Secondary System which has been designed by Ian ‘8Pack’ Parry.

It is for PC hardware enthusiasts as it showcases high-performance components within a sleek design.

It’s predecessor, the OrionX, attracted a lot of attention within the IT industry, the OrionX2 has updated components and more power.

To ensure it is one of the best PCs around, 8Pack has used only the best components from various premium manufacturers.

The OrionX2 is based on the Phanteks Enthoo Elite and comes with stylish LED lighting and a large side door made of tinted hard glass.

It also offers a lot of space for high-end hardware and a multitude of modifications for the triple custom water cooling loop.

The water cooling system has been specially designed to prevent the PC from overheating as it uses a lot of power.

In the PC description, it says: “The process of planning and building a genuine 8Pack PC is a long and arduous one, at the end of which stands a truly tailor-made supercomputer.

“The combination of hand-picked components and years of experience at the summit of the overclocking scene enables 8Pack to build monumental computers that surpass any and all standards.”

It has also been called an “unparalleled level of craftsmanship” and while it costs a lot, it has a lot to offer in terms of performance and design. 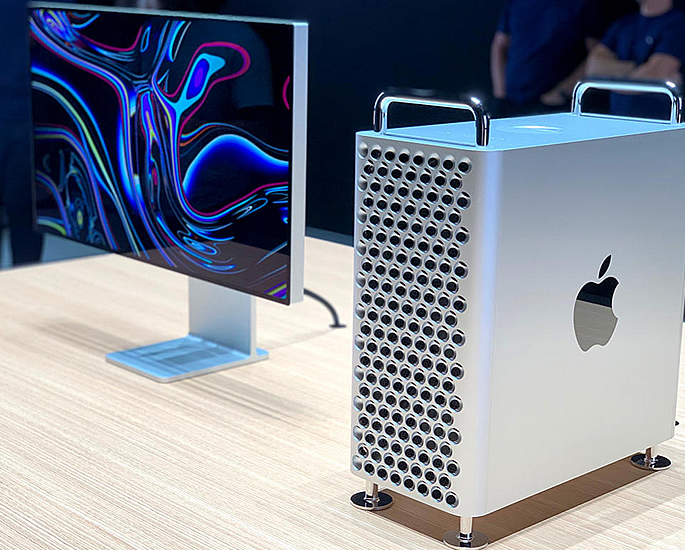 Apple is known for its premium laptops and PCs, however, the Mac Pro has been designed for those who need the upper echelon in computing power.

The Mac Pro was launched at the end of 2019 and while the base version starts off at £4,600, optional extras in order to make it the most powerful Mac will see the price increase up to £40,000.

This hefty price makes it the most expensive Mac ever made but it is also one of the best looking ones.

The basic version comes with an octa-core Intel Xeon CPU, 256GB of storage and 32GB of RAM.

When you start adding more RAM, storage capacity and processing power, the cost starts to add up.

Optionally, one of Apple’s Pro Display XDR monitors can be added for an extra £3,800. A fancier matte ‘nano-texture’ glass option costs £4,600.

By purchasing the monitor, you will have to pay an extra £750 for a stand, which is sold separately.

Although Apple is known for having expensive products, this Mac towers above other high-end machines.

For example, the previous record holder, the iMac Pro, costs £10,900 for the best hardware. 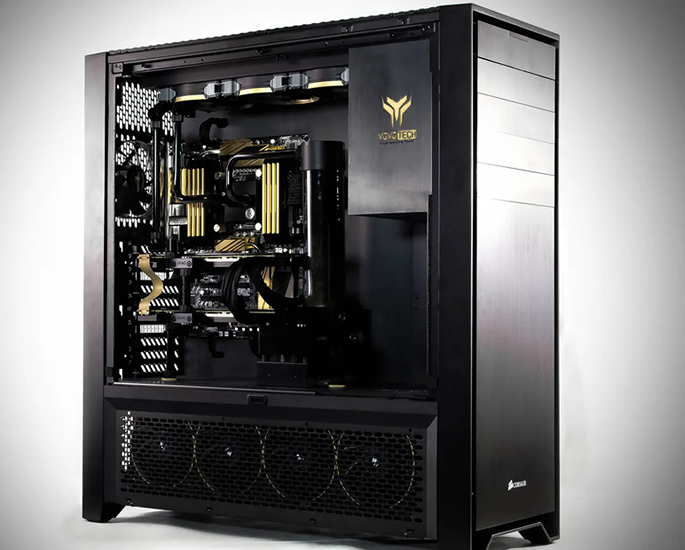 This gaming PC was created by British company Yoyotech in 2013 and it was capable of playing any 3D game in 4K.

For this price, you get a system which boasts amazing graphics and has a sophisticated cooling system to keep everything running smoothly.

The XDNA Aurum 24K has an Intel i7–4960x Extreme Edition processor which has been modified to run faster than it does out of the box, boosting its frequency to 4.6GHz.

The CPU also has six cores and thanks to an Intel feature called Hyper-Threading, the total core count stands at 12, which is 50% more than the Xbox One‘s processor.

As it has a water-cooling system, any noise is gone and instead, users will have a quietly running PC despite its powerful hardware.

It also has a 512GB solid-state disk and 2TB hard disk, all housed in a Corsair Obsidian 900D tower case, which has been modified to hide cables and give the inside a super-clean look.

This PC was meant for serious gamers willing to pay £11,000 rather than casual players.

Despite the hefty price, it offers a lot and presents what PCs might offer in the future. 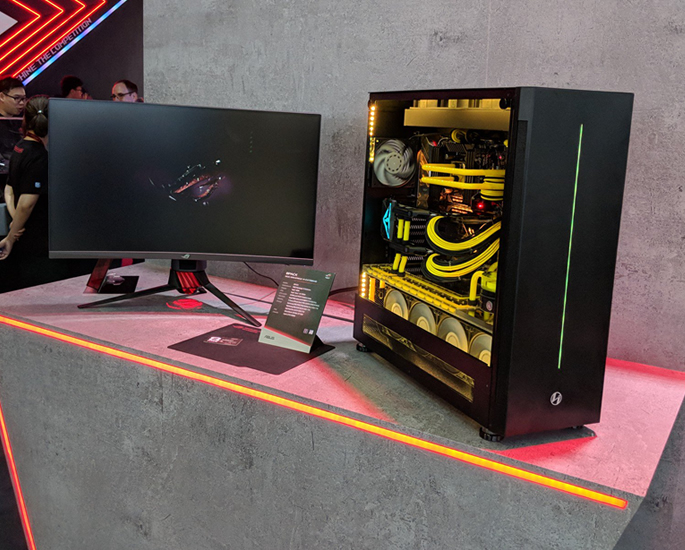 The Polaris MK2 is the ultimate PC for those who demand the highest possible multi-monitor resolution gaming and overall performance.

It is the ideal machine for both gamers and media professionals.

This system gives you two top graphics cards which are placed on their own custom water cooling loop to keep them quiet.

The motherboard for this PC ensures stability for its Core i9 10920X, 12 Core, 24 Thread CPU at the highest possible clock speeds.

The Polaris MK2 opts specifically for 64GB of memory as it is the ideal amount for rendering and coding tasks while offering efficient energy output at the same time.

The hardware is housed inside a custom case to give it an appealing look.

As well as the cooling system, the fans are independently controlled by a USB fan controller which can be adjusted for a truly silent operation.

It may be an expensive machine, but it is great if you are willing to spend the money. 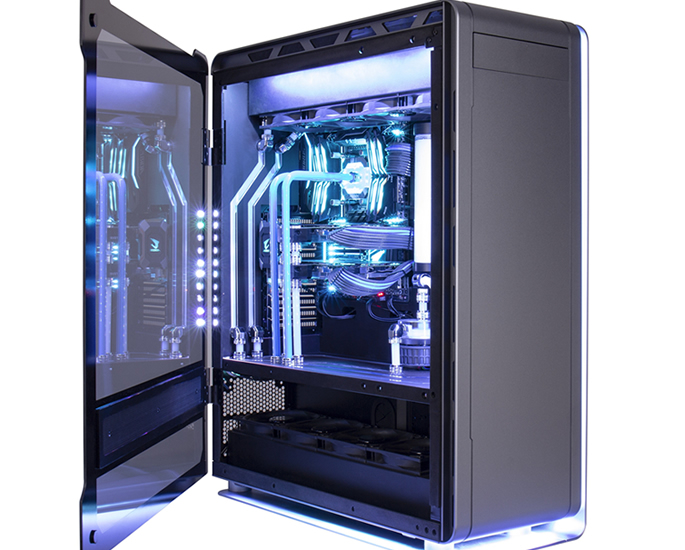 The base version of the Infin8 Hunter costs around £8,500, however, adding optional extras like another storage unit will drive the price well over £10,000.

The Hunter has a Samsung 970 EVO NVMe Solid State Drive as its primary drive to ensure unparalleled data transfer speeds as well as game loading times.

This is backed up by a large storage drive for everything else.

Its graphics card enables up to 8K display which makes gaming all the better when factoring the cooling system as it makes for a silent experience.

All of this is housed within a flagship Phanteks Enthoo Elite PC with tempered glass side panel.

Those looking to buy one can also enjoy customisation options like the choice of fluid colour and colour of the custom cable braiding.

While many of them are suited for gaming, they can be used for day-to-day activities which require powerful processing speeds.

They all boast top graphics and efficient cooling to prevent overheating.

While the prices are a lot, they are worth the investment if you are looking for only the best in computing.

Dhiren is a journalism graduate with a passion for gaming, watching films and sports. He also enjoys cooking from time to time. His motto is to “Live life one day at a time.”
5 Top Laptops Great for Working from Home
Is the New iPhone 12 Range Worth It?