Meghan Markle and Prince Harry’s interview revealed shocking insights, but one person made light of it and turned it into an Indian TV soap.

"If the Meghan & Harry interview was an Indian drama."

Prince Harry and Meghan Markle took the world by storm in a bombshell interview with Oprah Winfrey.

However, it has led to a wave of memes across the world. This includes one netizen who edited specific clips into an Indian TV soap.

The explosive interview took place on March 7, 2021, where Meghan and Harry opened up about their struggles with the Royal Family.

They revealed that they actually got married three days before their televised wedding.

The couple also claimed that a family member commented on their baby Archie’s skin colour.

While the interview revealed some shocking insights, it is not officially available in India yet.

However, this did not stop some Indian netizens from making light of the interview and creating hilarious memes.

One viral meme saw a user take clips from the interview and make it look like an Indian TV soap with all the drama and dramatic effects.

“If the Meghan & Harry interview was an Indian drama.”

If the Meghan & Harry interview was an Indian drama. ? pic.twitter.com/cN2ict8KoB

In the video, dramatic flashes of light, repeated camera shots along with a woman doing the “aalaap” in the background have been added. All of which are what Indian soaps are known for.

Although the interview is a serious matter, netizens could not help but laugh at the edited version.

One user posted: “Man, cracks me up all the time!”

Another said: “This brings back so many bad TV memories.”

One person references a scene in the soap Sasural Simar Ka where Patali Devi pushes Simar down the stairs and blames Khushi.

The scene is incredibly dramatic with all the added effects and it has become a viral meme.

The user wrote: “Dead lmao it just needs a staircase.”

One netizen even posted a picture of the Royal Family dressed like the iconic Raichand family in Kabhi Khushi Kabhie Gham. 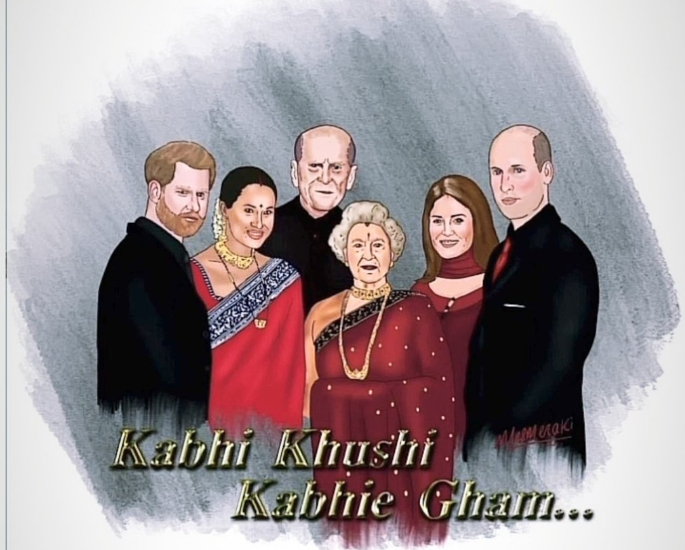 Another netizen reacted: “The tension was too much.”

Other memes in relation to the interview soon came to light.

Many Punjabi social media users spotted parallels between what Meghan said and the lyrics of popular Punjabi songs.

Why would they say that pic.twitter.com/Jwh5NZkKdN

Others said that Meghan Markle’s revelations about the Royal Family are similar to Indian TV soaps that rely on the cliches and conflicts between mothers-in-law and daughters-in-law.

“What Meghan told Oprah is basically the story of every Indian woman who has an Intercaste love marriage and comes to stay with her in-laws in a joint family.

The Meghan Markle and Prince Harry interview has sparked a lot of conversation, even in a humorous light.

Does ‘Bridgerton’ hold a Mirror up to South Asian Culture?
Vidya Balan opens up about Marriage to Siddharth Roy Kapur